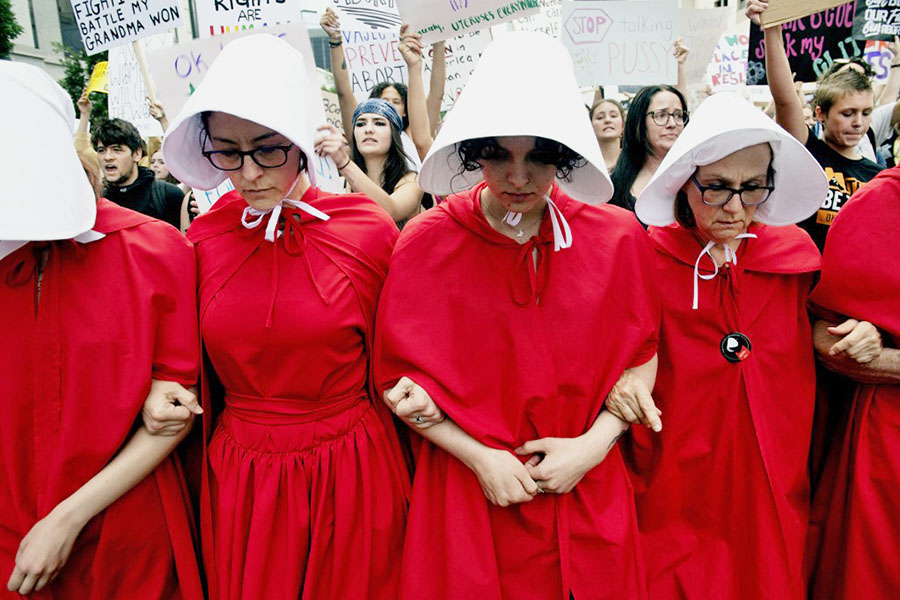 Abortion rights activists, dressed in an outfits from The Handmaid's Tale, lead protestors during a march in Denver, Colorado on June 27, 2022, four days after the US Supreme Court struck down the right to abortion. Image: Jason Connolly / AFP

CHICAGO — Countless women wept. Some spent the weekend burning white-hot with rage, commiserating with friends and mothers and sisters. Many were fearful, recognizing the feeling of a freedom being taken away and thinking to themselves: This could only get worse.

Millions of American women spent the past five days absorbing the news that the Supreme Court had overturned Roe v. Wade, erasing the constitutional right to a legal abortion that had held for nearly a half-century.

The decision instantly reordered the lives of women across the country.

Some women, especially conservative Christians, reveled in the decision as a moral and legal victory. But a poll released Sunday revealed that a sizable majority of women in the United States — 67% — opposed the court’s ruling to overturn Roe, and 52% of Americans said it was a step backward for the nation.

For women who had sought abortions in states where clinics were forced to shutter, the ruling was an immediate catastrophe, jeopardizing their decision to terminate their pregnancies.

Yet the decision reached far beyond them — across generations and geography, across race and class. Many women were sent spinning, questioning their place in society, at least in the eyes of the Supreme Court.

In dozens of interviews this week, American women who support abortion rights recalled the moment when they heard that Roe had been overturned, and the waves of shock and fury that followed. They reflected on how access to legal abortion had quietly undergirded their personal decisions, even if they had never sought one themselves. They worried that the progress many women have made since abortion was legalized — in education, the workplace and in the culture — would be halted.

And they reconsidered their own plans and those of their children: whether they should live, work or attend colleges in states where abortion has been banned, how they could help other women with unwanted pregnancies, and whether they would ever recover the constitutional right to receive a safe abortion, a guarantee that tens of millions of women have known their entire lives.

“It’s been quite disorienting, in terms of our humanity,” said Jennifer Solheim, 47, who teaches literature at the University of Illinois Chicago. “It is disorienting to realize that you’ve had a basic right taken away.”

‘My jaw is clenched’

In May, a draft opinion on the Dobbs v. Jackson Women’s Health Organization case was leaked to the public, making clear that a majority of the Supreme Court was poised to overturn Roe v. Wade, the landmark 1973 decision.

Still, when the Dobbs ruling was officially released last week, the blow was heavy for Kristen Coggins, a 36-year-old mother of three girls in Charlotte, North Carolina. She felt a “deep river of anger,” she recalled, “an undercurrent in my body that just couldn’t come to the surface.”

The news was especially grim for low-income women, who account for about three-quarters of abortion patients and are likely to face the steepest financial challenge to travel if abortion becomes illegal where they live.

“It’s hard enough for rural women to find health care and housing,” said Stephanie Isaacs, 30, a tenant organizer in Shelbyville, Tennessee, who has held a series of low-wage jobs like hospital attendant and school cafeteria worker since graduating high school. “This is like the straw that’s supposed to break us.”

‘Just a fact of life’

Jodi Ealy, 29, of Little Rock, Arkansas, is the exception among women in her family: She is the only one who has not had an abortion.

“It’s always just been something that’s just a fact of life,” Ealy said.

And for her family members, she said, “It was always the right decision for every woman. I just don’t think it’s fair to take that away.”

Also read: As US undoes abortion rights, Chile works to enshrine them

After last week’s Supreme Court ruling, many women were spurred to examine their own experiences and that of their families, regardless of whether they had ever had an abortion. According to the Guttmacher Institute, a research group that supports abortion rights, 1 in 4 women will have an abortion by age 45.

Coggins, of Charlotte, recalled a chilling detail from a family history, told to her by her aunt: In Buffalo, New York, a great-aunt performed several abortions with a wire hanger for women in her neighborhood who needed them, long before Roe granted the right to a legal abortion.

In Pennsylvania, Judith Saylor, a 77-year-old dressmaker, remembered that for years, she had rented rooms to female students at what is now Millersville University, and said scores became part of a family she is still in touch with. Several, she recalls, got pregnant and chose to have abortions.

“One of them, I went with her to get an abortion,” she said. “It was a very traumatic time, but she wouldn’t have made another decision. Twenty years later, she feels right with her decision.”

After Roe was overturned, many women asked themselves a simple question: What do we do now?

Lincoln, Nebraska, seemed like a wonderful place to live to Jessica Versaw, 33. It is a college town where she has a supportive network of family and friends. But since the decision, she has spent much of her time contemplating what a post-Roe world means for Nebraska.

Now, Versaw, a software designer, is entertaining the idea of moving out of the state. Abortion is still legal, but Gov. Pete Ricketts, a Republican, has said he will move to ban it, even in cases of rape.

“We thought it was enough to live somewhere that’s this blue dot in a red state,” she said. “But if the state is going to leave us behind, then we will leave it.”

Emily Ross, a 33-year-old project manager in a manufacturing plant in Greensburg, Pennsylvania, did not consider herself politically active before. But now she feels compelled to volunteer for a political campaign, trying to elect a Democratic governor in the fall election. If Roe could be overturned, would the Supreme Court take on contraception next — even the morning-after pill?

“I’m really concerned about what the future could be, because this is Step 1,” she said. “I don’t care what anyone says: There are a lot of liberties we thought we had, and I don’t think they will exist come five years from now unless we make serious changes.”