For Uyghurs, UN report on China's abuses is long-awaited vindication

The 48-page report, which said that China had committed grave human rights abuses in Xinjiang, sharply undercuts Beijing's aggressive efforts to discredit Uyghurs who dared to speak out 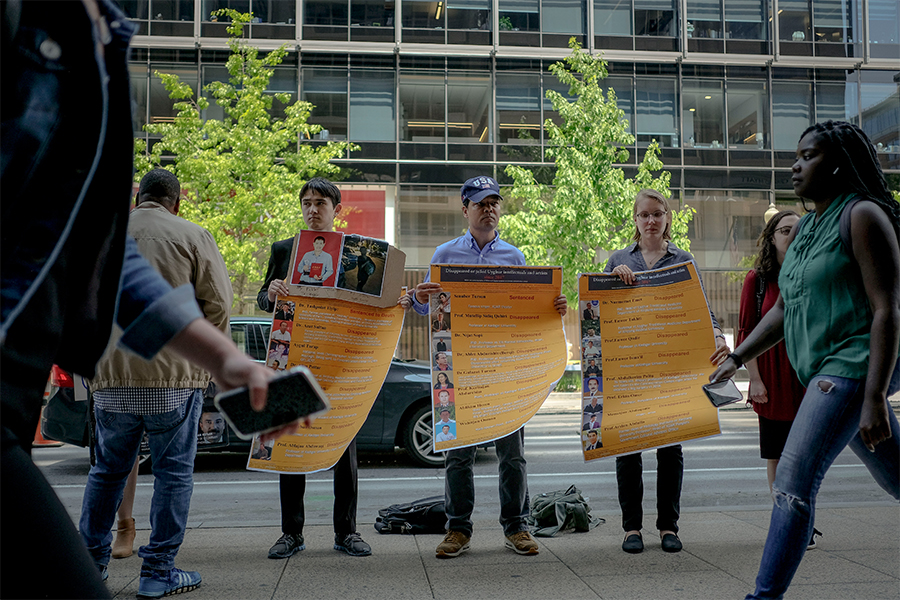 FILE — Uyghur supporters hold a rally encouraging sanctions against Chinese officials in Washington on Friday, May 3, 2019. For the many Uyghur activists who have campaigned — often at great personal cost — to bring China’s intense crackdown in Xinjiang to light, the United Nations report released on Aug. 31, 2022 that largely validated their claims was a powerful, if long-delayed, vindication. Image: Gabriella Demczuk/The New York Times

HONG KONG — At first China said there was “no such thing” as re-education centers that held vast numbers of people in its far western Xinjiang region. Then, as more reports emerged that hundreds of thousands of Uyghurs and members of other largely Muslim groups were being detained, Beijing acknowledged the camps’ existence but described them as vocational training centers.
When overseas Uyghurs spoke out about the authorities’ abuses in Xinjiang, China targeted their families back home, sentencing their relatives to long prison terms and using the full weight of state media and prominent Chinese diplomats to denounce the activists as liars and frauds.

For the many Uyghur activists who have campaigned — often at great personal cost — to bring China’s intense crackdown in Xinjiang to light, a United Nations report released Wednesday that largely validated their claims was a powerful, if long-delayed, vindication.
The 48-page report, which said that China had committed grave human rights abuses in Xinjiang, sharply undercuts Beijing’s aggressive efforts to discredit Uyghurs who dared to speak out. It also gives new momentum to the Uyghur activists’ cause and an opportunity for rights campaigners to put the issue before the U.N. Human Rights Council later this month and increase pressure on businesses to distance themselves from China.
“As I was reading the entire report, I was fighting back tears,” said Rayhan Asat, a Uyghur lawyer in Washington whose brother, Ekpar, was sentenced in 2020 to 15 years in prison in Xinjiang. “It was a long-awaited recognition of the suffering of my brother and millions like him.”
Many overseas Uyghurs and other activists had doubted that the U.N. office would release such a forceful report, given Beijing’s growing influence over the international body and the reluctance of Michelle Bachelet, who stepped down on Wednesday as the U.N. high commissioner for human rights, to criticize China.
But in the final minutes of her term in office, Bachelet’s office released a document that said China’s crackdown in Xinjiang may amount to crimes against humanity, a stark assessment that surprised some critics who felt her office was increasingly willing to pull its punches in exchange for access and better ties with Beijing.
“I am heartened that courageous survivors’ voices were given their deserved weight,” said Asat, the lawyer in Washington. She said that it was difficult to read some sections of the report, which described credible reports of torture, mistreatment and sexual assault while in custody. “I know my brother was subject to brutal torture and all sorts of inhumane treatment,” she said, referring to his experience when he was in internment camps for three years until 2019. “I try not to think about it. It’s self-defeating and doesn’t help me remain vigilant about why I’m fighting.”
Also read: Leaked China database reveals thousands of Uyghurs, other minorities detained in Xinjiang
Activists said they had grown increasingly concerned during Bachelet’s final days in her job, when she hinted that the report, which had already been delayed for nearly a year, might not come out before she left. China had urged her office not to release the document and submitted lengthy replies after the government was shown a draft, per the standard procedure of the U.N. office.
The United Nations attached China’s 131-page response as an annex. It called the report a “so-called ‘assessment” that was “based on disinformation and lies.”
While several Uyghur activists said it would have been useful to see the report far earlier, they hoped its release would give added weight to a campaign that they say has been eclipsed by the coronavirus pandemic, the Russian invasion of Ukraine and other international issues.
“Hopefully, it will ignite another fire, and so it will get more attention from other countries, other NGOs and the U.N. and there will be more action to stop it,” said Ferkat Jawdat, a Uyghur in Virginia whose mother was imprisoned in Xinjiang and now is in isolation at her home in Urumqi, the regional capital.
Some activists remained critical of the U.N. human rights organization, saying it did not go far enough in pushing China for accountability. They noted it did not call the repression in Xinjiang a “genocide,” a conclusion reached by the United States and an unofficial tribunal in Britain, even as the report outlined components of such an assessment, including a “stark” decline of Uyghur birthrates, the destruction of shrines and mosques and curbs on Uyghur language instruction.
Also read: World Refugee Day: 10 biggest displacements in recent years
“Despite well-documented evidence of state-sponsored torture and the intended destruction of the entire Uyghur ethnic groups through massive concentration camps, physical and mental torture, slave labor, massive displacement, enforced sterilization to prevent population growth and separation of children from their parents, the U.N. report came short of calling the crime by name,” said Mehmet Tohti, executive director of the Ottawa-based Uyghur Rights Advocacy Project. “It seems to me that the report has gone through serious haircuts.”
Still, for the those who have seen their family members imprisoned and themselves attacked publicly by the Chinese state, the report offers a victory, even as it falls short of their goal of freedom for their relatives.
The report gives evidence to China’s critics that they can take before the Human Rights Council, the United Nations’ leading rights body, to push for greater accountability. Rights groups have called on the council to set up formal mechanisms to investigate China for violations of international law and identify those responsible, although Beijing and nations that support it could thwart such an effort.
“It is imperative that nations take this report and make concrete steps toward stopping these crimes against humanity and holding China accountable for them,” said Rushan Abbas, a Uyghur American activist and former Defense Department translator whose sister was sentenced to 20 years in prison in apparent retaliation for Abbas’ efforts to speak out about the repression in Xinjiang.
“I hope that the U.N. will use their influence and position to advocate for the freedom of all the innocent Uyghurs like my loving sister.”