How United Nations Development Program, or UNDP, one of the world's largest sustainable development organisations partners with polluters, even those that at times work against the interests of the communities the agency is supposed to help

By Sarah Hurtes and Julie Turkewitz 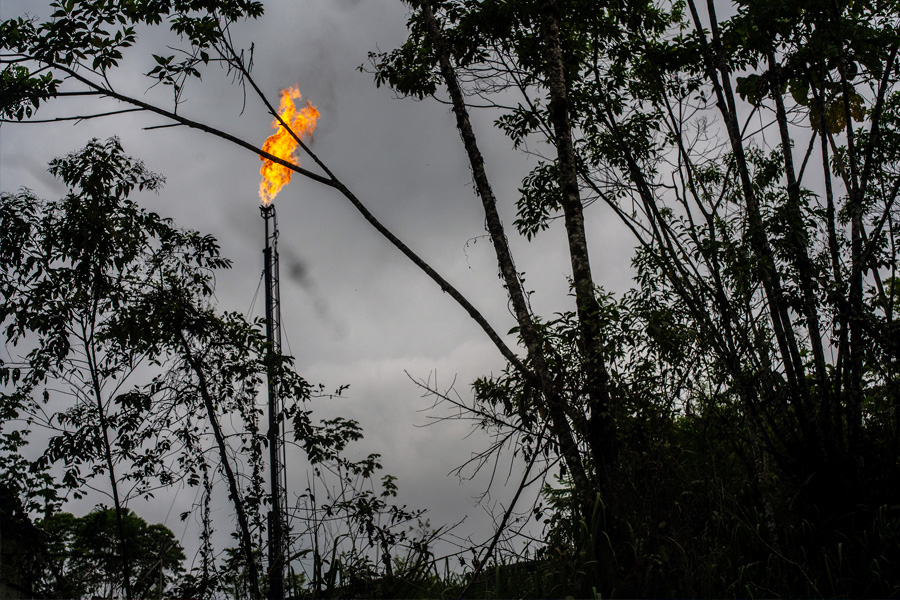 A gas flame burned at an oil well in Putumayo, Colombia on Feb. 6, 2022. One of the world’s largest sustainable development agencies has worked with energy companies to quash opposition and keep oil flowing, even in sensitive areas. (Federico Rios/The New York Times

RESGUARDO BUENAVISTA, Colombia — At the edge of the Colombian Amazon, in an Indigenous village surrounded by oil rigs, the Siona people faced a dilemma.

The United Nations Development Program, or UNDP, had just announced a $1.9 million regional aid package. In a village with no running water, intermittent electricity and persistent poverty, any money would mean food and opportunity.

But the aid program was part of a partnership between the U.N. agency and GeoPark, the multinational petroleum company. The company holds contracts to drill near the Siona reservation, including one with the government that would expand operations onto what the Siona consider their ancestral land. To the Siona people on the Buenavista reservation, oil drilling is an assault, akin to draining blood from the earth.

This collaboration is one example of how one of the world’s largest sustainable development organizations partners with polluters, even those that at times work against the interests of the communities the agency is supposed to help.

From Mexico to Kazakhstan, these partnerships are part of a strategy that treats oil companies not as environmental villains but as major employers who can bring electricity to far-flung areas and economic growth to poor and middle-income nations. The development agency has used oil money to provide clean water and job training to areas that might otherwise be neglected.

But internal documents and dozens of interviews with current and former officials show that when the United Nations has partnered with oil companies, the agency has also tamped down local opposition to drilling, conducted business analyses for the industry and worked to make it easier for companies to keep operating in sensitive areas.

The agency’s Colombia office in particular is a revolving door of officials moving in and out of oil companies and government energy ministries. The U.N. development agency has also worked with the government and the oil industry to compile dossiers on drilling opponents. There is no evidence that those dossiers were used to target anyone, but in a country where environmental activists are killed at a rate higher than anywhere else in the world, activists and community members said they felt their lives had been put at risk.

Even as the United Nations sounds the alarm on climate change and calls for a dramatic reduction in fossil fuel consumption, its development arm at times serves as a cheerleader for the oil and gas industry.

“The oil and gas sector is one of the industrial sectors worldwide capable of generating the greatest positive impacts on people’s development conditions,” the U.N. Development Program wrote in 2018.

The development agency said it supports a clean energy transition and does not encourage drilling. But Achim Steiner, the agency’s head, said its mission is to bring people out of poverty and that that often means working in countries that are built on coal, oil and gas. “We have to start where economies are today,” Steiner said. “I don’t see a contradiction, but there is a tension.”

Adding to that tension, current and former officials say, is a relentless fundraising pressure. The agency takes a cut — from about 3-10% — of donations. Officials, backed by the agency’s own audits, say that puts pressure on development officers to find partners in their assigned countries, even when the donors work against their agency’s interests.

Internal emails show that senior officials have bristled at having to put a glossy sheen on the world’s dirtiest companies — a process critics call blue washing, after the organization’s signature color.

In 2017, for example, two years after world leaders adopted the Paris climate agreement, the agency published a report on the positive role the oil and gas industry could play for the world. It listed an Exxon Mobil recycling initiative and Chevron’s promotion of engineering in classrooms.

“I really think this publication is problematic, as it aims to portray the oil and gas industry in a favorable light,” one agency employee wrote in a group email. The report “was undermining our message on sustainable energy,” read another email.

As a share of the agency’s $8 billion budget, money from the energy industry is a pittance: about $6 million a year, according to data provided by UNDP. But locally, that money can have outsize effects.

Nowhere are those effects felt more than in Colombia, where oil companies, the government, armed groups and environmentalists are fighting over the future of the Amazon. Deforestation has reached record levels, threatening a rainforest that serves as a crucial buffer against climate change.

Until last year, the Siona people living on the banks of the muddy Putumayo River in southern Colombia saw the U.N. development agency as an ally in that fight. The community had benefited from a previous grant from the agency.

Then came the GeoPark partnership.

‘Deal of the Year’

Mario Erazo Yaiguaje, a soft-spoken community leader and former governor of the Buenavista reservation, suspected that the UNDP aid program was a stealth attempt by the oil company to push his village into accepting its presence in the region.

The Siona of Buenavista live in wooden homes on a small territory cut into the Amazon on the border with Ecuador. Community life revolves around the chagra, a traditional farm plot, and yagé, a substance that the outside world labels a hallucinogen but the Siona consider a medicine that, when taken under the instruction of an elder, allows them to receive wisdom and guidance.

This region has been the scene of conflict for generations, and the Siona of Buenavista see oil companies as the source of their problems, drawing in both leftist rebels, who have attacked the oil pipelines in the area, and the government soldiers who are sent to guard company infrastructure. The oil industry and the cocaine trade have together contributed to so much violence that one of the country’s highest courts has designated the Siona at “risk of extermination.”

The United Nations announced its GeoPark partnership at a moment of controversy. The company was already defending a lawsuit over an oil spill in the region. Then, a local advocacy organization publicly accused GeoPark of hiring an armed group to threaten drilling opponents. The company fiercely denied the allegation, but activists in the region said they feared for their lives.

Erazo saw the GeoPark deal as a tactic. “Clearing their name,” he called it. “When we saw that GeoPark was giving money to UNDP, we realized that they’d made the deal of the year.”

GeoPark said it has no interest in drilling on the Siona reservation and has taken steps to give up its lease on the disputed territory. It said its partnership with the development agency was intended to help communities that had suffered economically during the COVID pandemic. The money was never intended for the Siona, the company said.

“We have always had a relationship based on dialogue, respect and building trust with our neighbors,” the company said in a statement.

The Siona of Buenavista saw things differently and began preparing for a difficult decision.

‘This Is a Trick’

Steiner said his agency works under difficult conditions to bring money and opportunities to people who need it most. He does not set Colombia’s energy policies and cannot order the government to stop drilling in certain areas. What he can do, he said, is look for ways to minimize harm to communities and the environment.

“But also to maximize the benefits of an industry — extractive industries writ large — that is very significant, and a very significant revenue source for many developing countries,” he said.

A development official made a similar argument last year in a tense call with Erazo and others about the GeoPark deal. The United Nations did not invite the oil companies into the area, the official, Jessica Faieta, said. But “now that they’re already in the region, we can in some way guarantee that they comply with human rights.”

The Siona of Buenavista were livid. The United Nations seemed to be vouching for oil companies, Erazo said.

That conversation torpedoed any hope of winning them over. The Siona filed a formal complaint with the agency, returned their earlier grant and swore off ever again accepting help from the development program.

“People applaud every time a UNDP representative arrives because he’s arrived with something. ‘God bless!’” Erazo said. But, he went on, “This is a trick.”

The partnership with GeoPark, he said, was “the death of that organization for us.”

The development agency canceled the GeoPark partnership and is now investigating why it ever got involved with the company when the Siona’s grievances were already so well known.

“I think that is a legitimate critique,” Steiner said. “You know, we have learned lessons.”