McDonalds shakes up its board

McDonald's is in the middle of a growth plan that includes new investments in its digital strategy and marketing as it looks to keep up with consumers. However, its board has been under pressure from a number of shareholders and franchisees 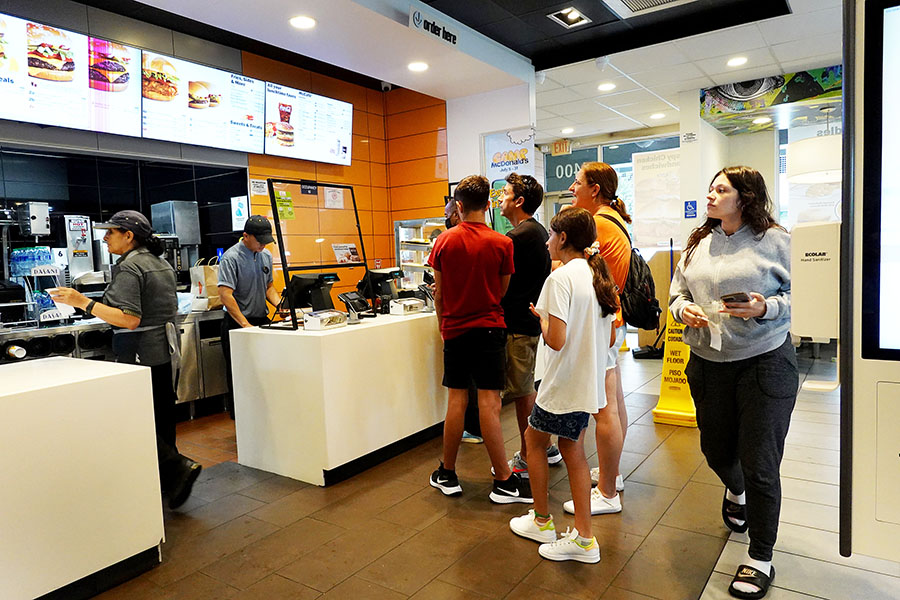 Customers wait to order food at a McDonalds fast food restaurant on July 26, 2022 in Miami, Florida. The McDonald's company reported U.S. same-store sales rose 3.7%, while international sales rose 9.7% during the most recent quarter. However, it also said that total revenue fell 3% to $5.72 billion; it attributed the weakness to slowing demand in China. Image: Joe Raedle/Getty Images

McDonald’s announced a shake-up of its board of directors Monday as the company faces the effects of inflation, war in Europe and tensions with franchisees.

Sheila Penrose will retire after more than 15 years, and three new directors will join: Anthony Capuano of Marriott International, Jennifer Taubert of Johnson & Johnson and Amy Weaver of Salesforce.

McDonald’s, which operates nearly 40,000 restaurants worldwide, is in the middle of a growth plan that it has called “accelerating the arches” and includes new investments in its digital strategy and marketing as it looks to keep up with consumers. The chain’s sales topped analysts’ expectations in the most recent quarter, but its board has been under pressure from a number of shareholders and franchisees. Its CEO, Chris Kempczinski, warned that the company is staring down “weak consumer sentiment around the world and the possibility of a global recession.”

Last year, some shareholders voted against the board’s chair, Enrique Hernandez Jr., and the compensation committee chair, Richard Lenny, over the handling of the 2019 dismissal of Steve Easterbrook as CEO; all members were ultimately reelected. In May, shareholders of the chain, which has battled discontent among certain franchisees, supported a company audit of its diversity, equity and inclusion efforts, as well as other related matters.

And earlier this year, billionaire activist investor Carl Icahn targeted Lenny, who also leads its corporate responsibility team, and Penrose, who led sustainability, over the way the company sources pork. Icahn had argued that McDonald’s had not fully lived up to its commitment to change the way it sources its pork; the chain contended that his demands were unreasonable given the current U.S. supply.

Icahn’s nominees garnered only around 1% of votes. And Penrose won the backing of a large majority of voting shareholders. A McDonald’s spokesperson told the DealBook newsletter that Penrose’s departure was unrelated to that campaign. Hernandez, the board’s chair, lauded her tenure, saying she had overseen “critical progress” on the chain’s “climate, responsible sourcing and diversity, equity and inclusion goals.” McDonald’s has not yet picked her replacement as sustainability lead.

Also read: Women are taking up more leadership roles but not in the boardroom

The new directors have experience in areas that McDonald’s is looking to bulk up: Taubert, who is the worldwide chair of pharmaceuticals at Johnson & Johnson, brings a focus on global health care, with McDonald’s under pressure to serve healthier products; Capuano, Marriott’s CEO, has ample franchisee and hospitality experience; and Weaver, Salesforce’s chief financial officer, adds digital acumen, as McDonald’s focuses on its online loyalty program.

Still, the shake-up may not appease some board critics, in particular those who have targeted Hernandez, who has served on the board since 1996 and was elected chair in 2016. Hernandez had the lowest share of reappointment votes among sitting board members at the company’s last investor meeting, according to regulatory filings.

McDonald’s now has 14 board members; its bylaws allow for 11 to 24 directors.

Tweets by @forbesindia
Photo of the day: Wooing the voters
South Korean financial majors have applied to create virtual assets exchange in 2023