Old tricks, new crises: How misinformation spreads in the US

Accurate news stories about mass shootings have attracted eyeballs but algorithms have also spurred baseless conspiracy theories from trolls who want to push lies to attract traffic. And thousands have unwittingly shared them on Facebook, Twitter and other sites 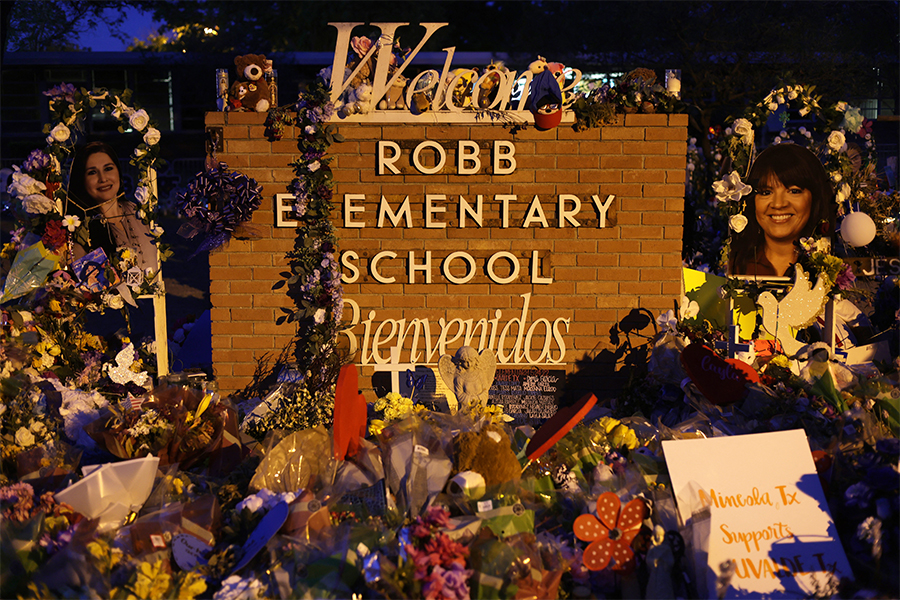 Flowers and photographs are seen at a memorial dedicated to the victims of the mass shooting at Robb Elementary School in Uvalde, Texas. Photo: ALEX WONG/ GETTY IMAGES VIA AFP

Washington, US: With gun control under debate and monkeypox in the headlines, Americans are facing a barrage of new twists on years-old misinformation in their social media feeds.

Accurate news stories about mass shootings have attracted eyeballs but algorithms have also spurred baseless conspiracy theories from trolls who want to push lies to attract traffic. And thousands have unwittingly shared them on Facebook, Twitter and other sites.

The May 24 attack at Robb Elementary School in Uvalde, Texas was a "false flag" operation aimed at pushing restrictive gun laws, according to Telegram posts from supporters of QAnon.

Carl Paladino, a New York congressional candidate, was among those who shared a similar theory on Facebook, later deleting it.

Others misidentified a shooting victim as "Bernie Gores" -- a made-up name paired with an image of a YouTuber who has been wrongly linked to other major news events, including the Russian invasion of Ukraine.

Experts say such misinformation is part of a pattern in which unscrupulous operators intentionally repurpose old narratives.Also read: Those cute cats online? They help spread misinformation

"A lot of this stuff is put together almost in this factory production style," said Mike Caulfield, a misinformation researcher at the University of Washington's Center for an Informed Public.

"You have a shooting event, you have these various tropes you can apply."

Groundless claims of a "false flag" operation, which refers to political or military action that is carried out with the intention of blaming an opponent, can be traced back to the 2012 mass shooting at Sandy Hook Elementary School in Newtown, Connecticut.

After 20 children and six staff members were killed, InfoWars founder Alex Jones falsely claimed the Newtown casualties were "crisis actors" -- people who are paid or volunteer to play disaster victims.

In November 2021, a Connecticut judge found Jones liable for damages in a defamation suit brought by parents of the victims.

But regardless, allegations of staged mass shootings have routinely spread from fringe online networks such as 4chan to mainstream platforms -- including the social media feeds of politicians such as Republican congresswoman Marjorie Taylor Greene and, more recently, Arizona state senator Wendy Rogers.

In the race to capture online attention following breaking news, recycled narratives can be produced quickly and are easier for audiences to digest, Caulfield said. Content producers "make guesses" about what may go viral based on past popular tropes, which can help monetize that attention.

"When you spread this stuff, you want to be seen as in the know," he said, even though the information is demonstrably false or misleading.

Similarly, false claims about the recent spread of monkeypox -- a rare disease related to smallpox -- borrow from Covid-19 misinformation.

Since the outbreak, social media posts have claimed without evidence that the virus is a bioweapon, that the outbreak was planned, and that Microsoft co-founder Bill Gates is behind it. Others have falsely equated monkeypox to other viruses, including shingles.

Those claims resemble debunked conspiracy theories from the early days of the Covid-19 pandemic.

Memetica, a firm that conducts digital investigations, has researched some of the top Covid-19 misinformation recycled for monkeypox. One widespread theory points to a 2021 threat preparation exercise conducted by the Nuclear Threat Initiative (NTI) as purported evidence that the outbreak was planned.

That conspiracy theory is nearly identical to claims about Event 201, a pandemic simulation held in October 2019, that circulated online in early 2020.

"What was surprising to me was how similar (Covid-19 misinformation) is now to monkeypox," Adi Cohen, chief operating officer at Memetica, told AFP.

Some monkeypox theories have been shared by conservative figures including Glenn Beck and anti-vaccine advocate Robert F. Kennedy Jr, according to Memetica's research. Both have previously promoted misinformation about Covid-19.

Cohen said such tactics may be an effective way to get engagement on social media, regardless of the falsity of the information being shared.

"It's the replication of what seems to work in the past," he said. "Why work hard when you don't have to?"
by Daniel FUNKE