Here's a look at the major wheat producing countries in South America, and how they might, or might not, be able to help alleviate the crisis 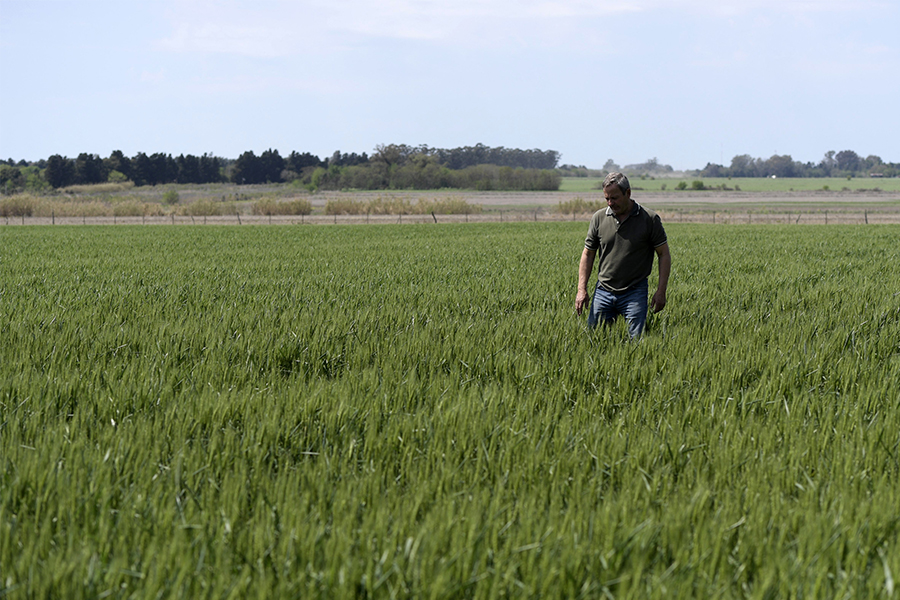 A file photo of Argentine farmer walking in a wheat field at a farm near Ramallo, some 245 km north-west of Buenos Aires. (Credits: JUAN MABROMATA / AFP​)

As the world faces a growing food crisis provoked by Russia's invasion of Ukraine, many have looked to South America's "breadbasket"—major wheat producers Brazil and Argentina, along with Uruguay and Paraguay—as a possible solution.
But experts and analysts say a variety of factors—climate, cost, domestic needs—make such a solution highly unlikely.
Russia and Ukraine alone produce 30 percent of the world's wheat supply.
Moscow's military offensive in Ukraine and subsequent sanctions on Russia have disrupted supplies of fertilizer, wheat and other commodities from both countries, pushing up prices for food and fuel, especially in developing nations.
A suspension of India's exports have further exacerbated the problem.
Here's a look at the major wheat producing countries in South America, and how they might, or might not, be able to help alleviate the crisis:

Agricultural giant Brazil is due to increase its wheat crop coverage by between three and 11 percent this year, according to Embrapa Wheat, a state-run research unit affiliated with the Brazilian agriculture ministry.
Record prices, surging demand and the "expectation of favorable weather, strengthen the projection of an increase in the planted area" from 2.7 million hectares in 2021 (6.7 million acres) to a little over three million in 2022, said Embrapa Wheat.

But the country of 213 million people is already unable to meet domestic demand—estimated at 12.7 million tons a year, and rising.
Internal logistical and transport costs have pushed many farmers, particularly in the south, to favor exporting, thus ramping up the need to import.
Brazil is actually the world's eighth largest importer of wheat, most of which (87 percent) comes from Argentina.

Argentina, home to 45 million people, is also traditionally a major wheat producer—but current climatic conditions are unfavorable, meaning it is unlikely to help fill the global void.
"We expect about an eight percent drop in the land area planted with wheat," Tomas Rodriguez Zurro, an analyst at the Rosario grains exchange, told AFP.
That amounts to a drop from 6.8 million to 6.3 million hectares, due mostly to a drought affecting the country, Rodriguez Zurro explained.
"In general, we plant wheat to then plant soybean, but the water reserves are very low, so the producers don't want to risk planting wheat in case it reduces the humidity reserves even more" for subsequent plantings, said Rodriguez Zurro.
On top of that, farmers say they will use less fertilizer due to soaring prices—another factor limiting production, the analyst said.
Russia is the world's largest exporter of fertilizers with more than 12 percent of the global market, but its sales have been virtually paralyzed by sanctions.

Both Paraguay, a country of 7.5 million, and Uruguay (population: 3.5 million) enjoy good wheat yields—but they have a much smaller global impact and neither expects to increase production.
"Wheat production is expensive, very expensive," said a source at Uruguay's agriculture ministry.
Farmers there expect a yield "similar to last year, or slightly higher," the source said—a total that should satisfy domestic demand and allow exports to remain at roughly one million tons a year.
In Paraguay, production should also remain stable, according to Hector Cristaldo, president of Paraguay's farmers' union, but he added: "Our volumes are not significant on the world stage."
Paraguay consumes 700,000 tons and exports as much again, almost exclusively to Brazil.
In mid-May, when India banned exports, wheat reached a record price of 438.25 euros ($456.68) per ton in European trading.
By Mauricio RABUFFETTI with South American bureaus
© Agence France-Presse

Tweets by @forbesindia
Being your own boss can pay off, but not always with big pay
China eyes security pact in Pacific Island summit