In July, an old scientific thought that was popular in the 1980s made a whole new comeback. Green scientists had then predicted that if the earth was to survive the ecological pressures of development, the rise in global temperature in 2050 must be capped at just 2 degrees above the 1900 level of 13.74 degrees Celsius.

This idea was captured in a controversial declaration at the Major Economic Forum meeting in L’ Aquila in Italy. Experts said there is a three-in-four chance that the 2 degree ceiling could be achieved if the world’s carbon emissions are limited at one tonne per person per year. 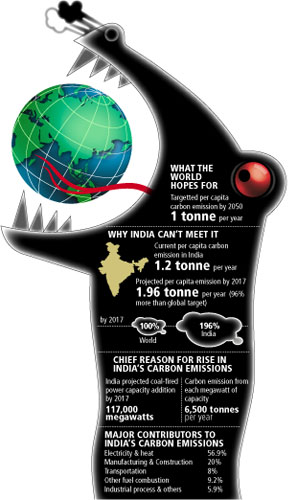 Image: Malay Karmakar
India has managed to stay clear of any emission reducing commitments ever since the Kyoto Protocol in 1997. However, it accepted, in principle, the 2 degree threshold in July. But can the country achieve its target? Can it afford to do so? We say no.
India’s aggregate carbon emissions predicted by the World Resources Institute in 2030 is 2.23 billion tonnes. The country’s population in 2030 estimated by the United Nations Population Database will be 1.48 billion. So, India’s per capita CO2 emission in 2030 will be almost 1.5 tonnes per person. That’s 50 percent more than the global target of one tonne per person.
That’s just a conservative estimate. Chances are India’s carbon emissions might reach near two tonnes per person per year much earlier.
Here’s why: Coal-fired power generation accounts for two-thirds of all emissions in India. By 2017, India will be adding about 1,17,000 MW of coal-fired power plants. Each MW added will emit 6,500 tonnes of CO2 per year. This implies that even by 2017, India would have added another 0.76 tonnes of carbon fumes per person per year.
“India will easily become the second largest CO2 emitter after China by 2020,” says K. Srinivas, former policy advisor at Greenpeace. “If India has to stick to the two degrees Celsius target, we will need a major tweaking of our power generation road map in favour of renewable sources,” he adds. But India refuses to let go of coal-fired power because it is the most viable option for a power-starved nation.
Scaling back these power capacity addition plans will not be practical for India.
Non-renewable energy sources are still much more expensive. So, to fuel a 7-9 percent economic growth and buttress its sagging infrastructure, India will have to depend on coal-fired power generation.
Western Europe emits six tonnes of carbon dioxide per person each year, North America does 19 tonnes and China emits three tonnes. India’s emissions are far below those levels.
The country must indeed take steps to control its emissions, but any significant contribution to cap global warming must come from other nations that emit much more carbon.
“We have just recognised this as a scientific view,” says Prodipto Ghosh, former environment secretary and part of the Indian climate change delegation. “But we have not accepted any targets. We have looked at the historical responsibility of the developed nations and believe that first they need to cut their emissions by 79.2 percent by 2020 if the world has to meet the two degree Celsius target,” he adds.

Tweets by @forbesindia
Who takes the Cash?
Telly Truths