Who takes the Cash?

RBI has brought back bank boundaries on the country's ATM map. The customer deserves better than that

India’s bank customers, those long-suffering souls who get negative real returns on their savings accounts, woke up a few months ago to find that they could withdraw money from any automated teller machine (ATM) of any bank, without paying a transaction fee. The Reserve Bank of India (RBI) had made a rule that banks should not charge customers for this unfettered access to cash withdrawal. It sounded too good to be true.

Well, RBI has now given a reality jolt to bank customers. At the behest of Indian Banks Association (IBA), the regulator has totally diluted the provision. It has now limited such free withdrawals to five and the amount on each occasion at Rs. 10,000. This means customers who want to withdraw money the sixth time in a month or need even Rs. 100 more than the Rs. 50,000 allowed in a month, must go hunting for ATMs run by their banks. 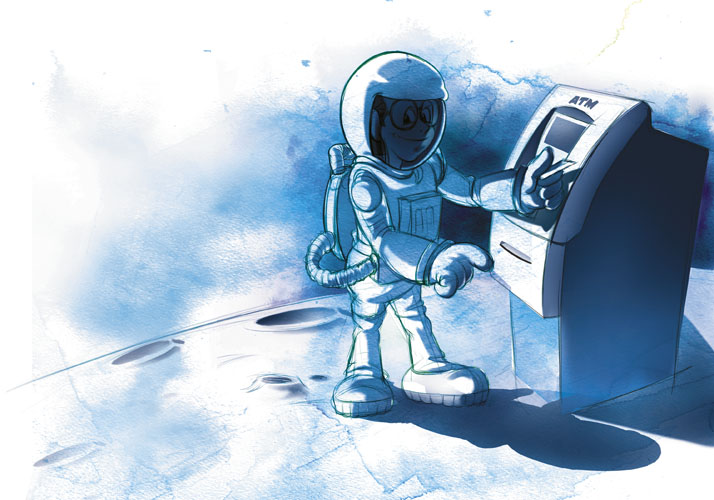 Image: Vidyanand Kamat
There are complex issues involved in allowing ATM access across bank boundaries. Banks like ICICI and HDFC Bank, which have created wide ATM networks, still have to shell out transaction fees to other banks when their customers walk into an ATM outside their networks. State-owned and co-operative banks, which have smaller networks, are seeing a drop in the size of each transaction and a consequent rise in the number of withdrawals. That means more transaction costs for the same amount of money they dispense.
But that is the industry side. For the customers of banks that have not created wide ATM infrastructure, the ability to withdraw money from the nearest ATM has been a boon. The new limitations mean that these banks will continue to run on thin infrastructure, happy in the knowledge that their customers can’t go away for more than five times.
Are RBI’s new riders customer-friendly or is there another way out?
Withdrawal Syndrome
RBI has asked banks to refrain from talking on the issue. But a senior manager of a large private sector bank, who is in charge of running its ATM network, says that he often walks into another bank’s ATM in his residential building rather than go to his own bank’s machine a few blocks away.  This convenience, however, has skewed the economics of running an ATM, he says. It costs anywhere between Rs. 40,000 to Rs. 70,000 per month to run an ATM, including rent, back-up power, connectivity, security and the cost of filling the machine with new notes. An ATM becomes viable only when it gets at least 100 chargeable transactions each day.
Now, if a large bank A’s customer goes to small bank B’s machine, the former will have to pay for its customer’s transaction. Though, there is good chance that customers of other banks will use bank A’s ATM and therefore provide it revenue (Rs. 20 per transaction). So, large banks want to keep their customers within their network. But smaller banks with fewer ATMs want to pay for fewer transactions. They want each customer withdraw larger amounts on each occasion.
The Way Forward
Globally, in the US and UK, there are third party “white label” ATM operators who charge a small fee for any bank customer to withdraw money from their machines. These ATMs are present anywhere from crowded high streets to remote locations. But, since RBI’s current rules don’t permit non-banking companies to run ATMs and the central bank does not want customers to pay for withdrawing money, it needs to evolve more creative solutions.
In the new world, electronic banking and non-branch banking will be the rule of the day. Five free withdrawals may suffice for customers who don’t maintain big average balances. But for customers who leave large amounts in their savings account, this could be crippling.
Every bank has a duty to provide its customers easy access to their money. Those like State Bank of India created a branch network in every nook and corner of the country to achieve that. Those like ICICI saved on the costs of setting up so many branches but created a network of ATMs to achieve the same purpose. All told, for a country of 1.17 billion people, the current ATM network is too thinly spread. There are many modern banks that have done neither. Both their branch network and ATM reach are thin. The opening up of ATMs to all customers could have served a strong incentive for them to invest in infrastructure. But now, they may well write off the Rs. 100 they pay other banks as a monthly expense and may not be pressed to increase their ATM networks soon. This is bound to create ATM haves and have-nots among bank customers of the country.
The latest decision of RBI has taken away the incentive for these small banks to put up a large ATM infrastructure or a wide branch network.
RBI should let banks fend for themselves rather than intervene. Perhaps the banks and the ATM network operators could bring down their transaction costs just like telecom companies reduced their interconnect fees amongst themselves.
Among sources of liquid cash for banks, current account and savings account deposits are the cheapest. Many banks derive one-third of all their deposits from them. They already impose a high minimum balance of several thousand rupees on these deposits, fully erasing from our minds the days when we could operate such accounts with as little as Rs. 5.
The banks should forego a bit of the returns they earn on this cheap money for the customers’ benefit. Either build your infrastructure and keep it within easy reach of the customer or prepare to pay for the transactions.