The tallest politicians have lost to a united Opposition: Ruchir Sharma 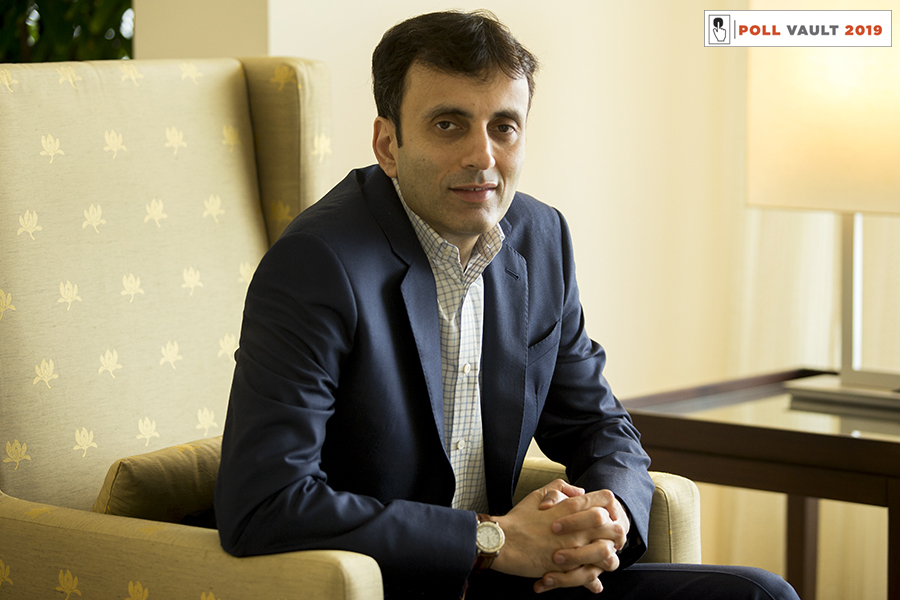 “India became a democracy when it was still very poor and perhaps more than the rich, the poor cherish the vote as a great leveller," - Ruchir Sharma, author of Democracy On The Road
Image: Joshua Navalkar

Come April, it will be the 28th time that Ruchir Sharma will hit the road to travel through major states to cover the 2019 elections in India, a country that he believes, even 70 years after Independence, has a weaker connection between politics and economics than one would expect.

Sharma, who launched his book Democracy On The Road, a political travelogue of a 25-year journey through India, says, “If you look at a long sweep of history in India, the one statistic that tells you why development is not such a powerful factor is this: There have been about 27 instances when a state’s economy has grown at a pace of over 8 percent in a chief minister’s five-year term; and still, chances are that the government will be tossed out half the time, which is unlike any other country.”

In fact, some incumbents like PV Narasimha Rao and Chandrababu Naidu, among others, were left to suffer humiliation on the campaign trail even after delivering growth. For instance, after a 9 percent growth during his term as chief minister, M Karunanidhi lost to J Jayalalithaa. Naidu and Rao met the same fate.

As more and more Indians become eligible to vote, political parties are leaving no stone unturned to convince floating voters to vote for them. Floating voters are ones who are not loyalists to a party and firm up their decision in the run-up to the elections.

But it is always the bellwether constituencies where the swing vote often shifted to the winning party. For example, Seohara, Uttar Pradesh (UP), is one of the most volatile swing constituencies where six different parties have won Lok Sabha seats since 1974. In India, most elections have been lost by 3 percent to 7 percent votes.

Caste is still the opening gambit to win tickets and elections. Sharma says development can be one of six factors, but can’t be the winning one to bag votes. The book offers a glimpse into how India goes into elections and how predominant caste and religion are as a voting parameter. But even caste votes are fragmented and community identity is key to politics.

An example of this is Bahujan Samaj Party (BSP) leader, Mayawati. She first ran for office in Bijnor, UP, which is where Sharma kickstarted his journey in 1979 to understand politics and the nuances of caste differences.

Bijnor is a reserved seat for Scheduled Caste candidates and Mayawati won her first parliamentary election from there in 1989. Mayawati is a Jatav, a caste known for leatherworkers, several rungs above sweepers and night soil workers. She brought all of them together and won by 8,879 votes. Though she became chief minister of UP later, Sharma notes that she lacks support from Dalits in other states and hence could not build a larger base across the country. So is the case with other leaders from UP, Bihar and Chhattisgarh, including the Yadavs.

Sharma says, “Mayawati’s Dalit base is confined just to UP because of the Jatavs and she does not have much acceptability in places such as Bihar or Maharashtra, which has a large Dalit concentration.” He adds politics is the downstream of culture and hence caste will always be there, and so will dynasty.

Sharma also makes note of the normality of joblessness in India. “We went to Madhya Pradesh last year and in the afternoon there were these bunch of men who did not have jobs; and they were sitting under a tree and playing rummy while placing small bets,” he points out. “This kind of acceptability of joblessness will not be there in many other countries, where the concern would be about violent crimes rising out of this.”

The book talks about political leaders, their campaigns over the last two decades, the rise of single leaders, the highest election spends in southern India and the catchy campaign catchphrases, among other things. Sharma says the electoral reality is that India rebels against domineering political bosses. Prime Minister Narendra Modi, he reckons, may face a similar obstacle.

“In 2014 the opposition was badly fragmented, and that’s a big change in this election; that is Modi’s biggest obstacle because if you look at India’s history in terms of Rajiv Gandhi or Indira Gandhi or even AB Vajpayee—they were tall leaders, but they all lost when the opposition came together.”

In 2014, the BJP came to power with resounding success. In 2019, though, even if BJP’s vote share remains the same, it may win fewer seats. “That is how Indian arithmetic works… If the coalition is together... that’s what the real determining factor of this election will be,” adds Sharma.

He also thinks Priyanka Gandhi’s official foray into politics is a little late and it will take a while for her to bring in the votes.

If an election matters less to India’s privileged than to the poor, Sharma explains why. “India became a democracy when it was still very poor,” he says. “Perhaps more than the rich, the poor cherish the vote as a great leveler—it is their memo to the powerful, reminding them who calls the shots.”

Tweets by @forbesindia
The hands that pull the strings
Shea: The better butter