Precast technology allows developers to standardise quality and build faster. This could be the answer to India's mass housing needs 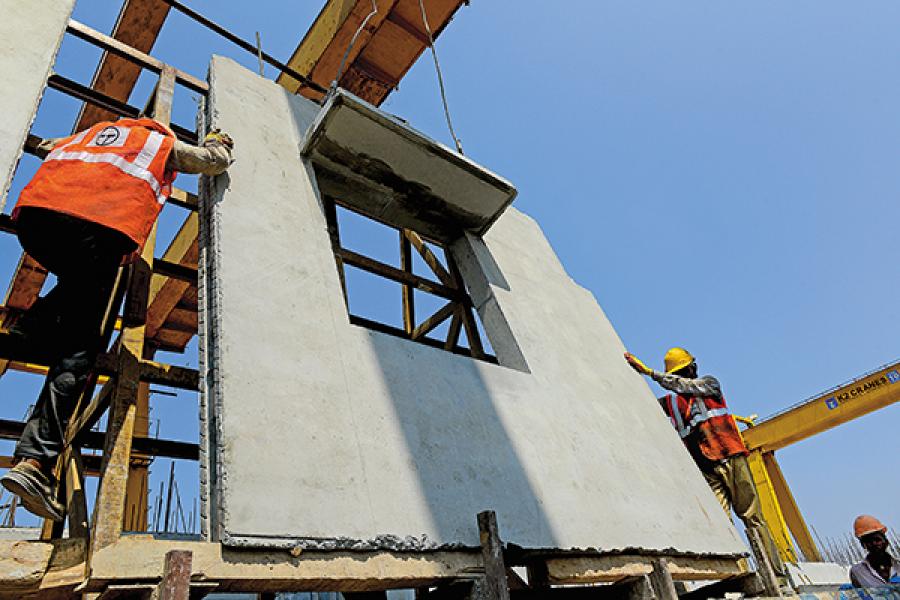 Image: Bmaximage
Construction workers assemble a precast wall of an apartment in Puravankara’s Sunworth project on the outskirts of Bengaluru

In the south-west corner of Bengaluru, the outline of a vast new project is taking shape:  Provident Housing, a subsidiary of real estate developer Puravankara Projects, is setting up a 6,000-home apartment complex. Its two- and three-bedroom apartments come with fitted kitchens, lawns, a walking track and a club house. Spread across 59 acres, the project—where homes cost Rs 35 lakh a piece—certainly doesn’t look and feel like an average affordable housing development. “We aimed to deliver each apartment at the same quality level and have succeeded in that,” says Ashish Puravankara, managing director of the Rs 1,677 crore-Puravankara Projects.

While the outskirts of Bengaluru are dotted with such developments, this particular project is noteworthy for reasons that could well set a precedent in the building process of large-scale residential projects in India. A typical project of this size would have, on an average, 2,000 workers. Different groups of workers would be at different stages of construction—mixing concrete, laying brickwork, plastering, painting, and laying plumbing and electrical wiring. Each phase of the project, numbering about 1,000 flats, would take about 36 months to deliver.

Provident Housing, in a bid to work faster and more efficiently, has opted for a technology known as ‘precast’, in which concrete slabs are manufactured with predetermined specifications. The slabs are then lifted by cranes and put in position to construct a structure.

Like Provident’s Sunworth project, across India developers are looking at precast technology as a solution to a range of issues. First, there is a shortage of labour. The Mahatma Gandhi National Rural Employment Guarantee Act (MNREGA) has shrunk the pool of available migrant construction labourers. Second, labour laws prevent developers from having a large number of workers on their books; they are usually hired on contract. Third, with different skill levels among workers, getting a standardised quality of work is proving to be increasingly difficult. Precast technology addresses all these issues.

In the case of Provident Sunworth, the company admits its adoption of precast technology was “tentative” to begin with. But so far, they have been more than happy with the outcome. Provident Housing has roped in Larsen & Toubro (L&T) as project partner, which has set up a plant at the project site at an investment of Rs 26 crore to manufacture precast concrete slabs. Here, steel bars are placed in metal boxes and concrete is poured in them. The site has just 160 workers, with another 80 for the night shift. Once the concrete sets, the slabs are cured—a process that removes rough edges, smoothens the surface, and makes the slabs capable of supporting heavy loads. At the Sunworth project, each ‘floorplate’ has 244 different elements (different kinds of walls in a room) that are manufactured at the L&T plant and which takes five days to generate. Compared to this process—by which one floor of the building can be constructed in eight days—the more conventional process in which construction is completed one floor at a time, with concrete being poured to form walls, takes up to 12 days.

Once all the elements in each slab are in place, they are transported to the building under construction, 200 metres away, by truck, lifted by cranes and placed in slots to form the walls of an apartment. Different concrete slabs are earmarked for assigned slots. “We leave space for electrical fittings and windows,” says Radha Krishna N, senior manager, technical, at the Sunworth project. The project completed a 12-storey tower in 96 days. Without precast technology, it would have taken 175 days, estimates K Somaraju, chief engineering manager at L&T who has been deputed to this project.

Once the slabs are in place, painting begins almost immediately. There’s no need to plaster (since curing smoothens the wall surfaces), cutting the process down by another week. Since different workers have different skill levels, walls in some affordable housing developments are rarely of the same quality, claims Puravankara; concrete slabs ensure consistency.

In all, Provident Housing delivered 1,440 units in December 2015, which is phase 1 of the Sunworth project. It took 30 months to complete and the company hopes to bring it down to 24 months for the next three phases. All the flats were sold out and individual owners have begun work on customising their apartments before moving in. The use of this technology, however, comes with hurdles: First, the slabs of concrete are heavy and cannot be transported over long distances as freight costs may render the project unviable. Industry experts estimate that the slabs cannot be transported over more than 200 km as expenses will become prohibitive. Second, the slabs are taxed at an excise duty of 14 percent when they are moved out of the manufacturing plant; this is unlike a project like Sunworth where the factory was on-site and, therefore, did not attract excise duty. This is an issue the industry is hoping the government will eventually address. Developers cite the time when excise duty was levied on ready-mix concrete; however, as the product became popular, the tax was removed. Third, a manufacturing plant for concrete slabs would only make sense if the demand for such large-scale housing projects picks up steam in a specific area.

As of now, Puravankara continues to be bullish about the potential of this business. Plans are on to launch a similar project in Chennai. And as more developers warm up to the idea, “we could explore setting up our own factory and this becoming a separate business vertical,” says Ashish Puravankara.

Tweets by @forbes_india
Single professionals just want a bed somewhere
As risk takers banks have to suffer for their decisions: Mohandas Pai