Feroze Gujral: In the business of benevolence

Feroze Gujral, who heads the Gujral Foundation along with architect husband Mohit, made the first-ever India-Pakistan joint exhibition possible at the ongoing Venice Biennale. It wasn't easy. But neither is running an art foundation 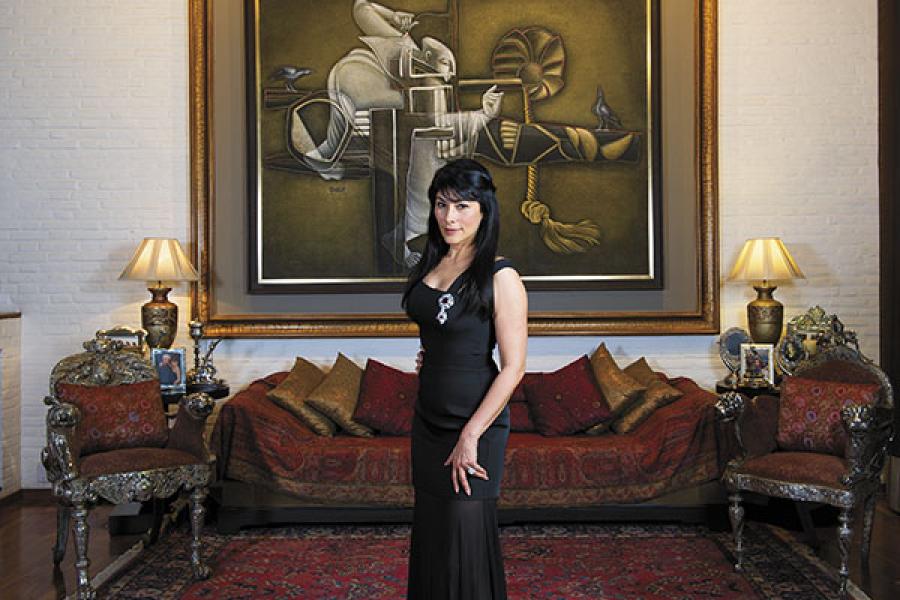 Q. How does the Gujral Foundation work? What are the channels through which it works, and what kind of partnerships does it foster and nourish?
We have a very simple kind of programming and a very simple agenda. We don’t programme anything entirely except for our property in Jor Bagh [a family property in New Delhi used as an exhibition space].

We usually programme four to six things a year, and that is in alliance with the likes of Goethe Institute or with one of the cultural councils. And usually with one of the corporates who arrange for refreshments or dinner. We like to pay just for the art, the artists, the support and installations and the hardcore costs. We try to get one or two sponsors for the non-core parts.

The selection of what we do in the year is very organic. We like to do one major thing a year. In the last four-five years, it’s been Kochi [Biennale] every alternate year; we like to do the Art Fair in January; we do one or two things that are international. But they are all to do with promoting Indian artists elsewhere. For example, we supported the eighth Berlin Biennale with 12 artists from the sub-continent, we supported the Gaitonde show [a retrospective on the Indian modern artist] at the Guggenheim Museum [in New York], we supported the Indian artists at the last Venice Biennale.

We try and do one or two things that are not our projects but projects that we believe in. That is usually something like Gati Ignites [a contemporary dance festival in New Delhi], or the Homelands exhibition [a touring exhibition in India] with the British Council. We did the execution and the outreach in five cities.

Q. How is the Gujral Foundation funded?
We have a corpus that we have instituted, and usually we use the amount that comes as the interest. We also do Outset India [a chapter of Outset UK, a philanthropic organisation dedicated to supporting new art], for which we do fundraisers.

Q. Of all the projects you’ve been involved in, which has been the most memorable?
All of them have been different. There have been projects with lights, with sound, performances… things that normally people don’t fund, or people can’t sell as an artwork. We’ve done a curator’s hub for young curators; there are no tutorial courses for curators in this country. That was exciting because there were a lot of young people who wanted to become curators, do the research, put up a show, do the lighting.

Each show has its own pull. I am doing Venice [Biennale] right now, that’s very exciting and a different kind of project.

To start Kochi off was very precious. For the first time, we were building something that was going to make a mark internationally. Or doing the Raqs project [Raqs Media Collective’s House of Everything and Nothing] where it was projected onto a whole building. That was unusual and exciting. Each has its own magic.

Q. What are the biggest challenges that young and upcoming artists face in India?
The biggest challenge is lack of awareness among people like us. We all spend a fair amount of money on a good car, jewellery or a holiday. We don’t realise the value of, first, helping somebody in the arts. It could be anything—textile or tribal art, or an art institution. We don’t look at any kind of creativity with pride or honour. This is our cultural heritage and we are so well known worldwide for it, but we don’t know how to nurture or value it.

Today you will give great value to your son or daughter becoming a lawyer or doctor or engineer. These have commercial value. But if you become an artist, you get fame like no other. There is a gap in the understanding and being proud about it. That is the greatest challenge.

Q. What are the hurdles that you face in running an art foundation?
For us, it’s really explaining why we do this. A lot of people ask me, “But why are you doing this?” And I am like… “Because it needs to be done.” There is this question, even from friends. They ask, “Why are you giving your money away? Why don’t you do a business?” Because this is a lot of hard work, a lot of travel. The biggest challenge is to explain what we do, and why we do it, time and time again, to encourage people around us, to ignite them, to explain to them that this is the future of India.

Q. Is there a model of partnership between corporate entities and governments that you regard as a good model towards the promotion of art?
I was a patron at Outset in the UK. Outset is one the largest production partners; they collect money from regular folks—not large amounts—and they put it together to fund projects. For example, a biennale or big public art projects or education projects. And that is an incredible model. They are also the largest acquisition fund for the Tate Modern in London. They collect the money, and every year they buy four or five things for the Tate. I am very proud to say that last year we hit our 100th acquisition [Gujral is director of Outset India, which she founded in 2011]. This is a small body of people from different professions, who give a small amount of money, but through that they manage to collect for, and donate to, a massive international museum fantastic pieces of contemporary art. And that is a stunning idea.

But, unfortunately, in India we don’t have institutions that we can give to. And even if there are institutions, by virtue of their rules and regulations, they cannot accept donations. There are so many policy issues in the way we have made our institutions that it’s not always easy even to give.

Today, if I tell you that if you give me a small amount of money, your name is going to be on the Tate walls forever, you will say yes. Because it is a haloed institution, and your name will be there for all your friends and family to see, and you’re giving to the public for the future. But there are no formats like that in India, and that is what we are struggling with—to help change policies. For instance we are working hard on ‘corporate cultural responsibility’ [CCR], and we have managed to push through an initiative under CSR [corporate social responsibility] that asks why can’t culture also be a social responsibility. If I put up a museum, or a library, an archival centre, a research centre or even a reading room for the public, that should also get the same recognition.

And why shouldn’t national institutions be able to take money? You don’t have to name the institute after me, but you can have a room or a programme. Everybody would love to do it, but they [the government] don’t make it easy. I can go anywhere in the world—the Tate, the Guggenheim—and tell them that I would like to do this exhibition with you, and they will take the money and do the most extraordinary thing.

Q. So policy issues pose a major hurdle in India?
Everything is ‘national’ here. It was important at a certain time, right after we became independent, that the government makes all these national bodies to represent the nation. But the model has not worked—they haven’t managed to make more new institutions of a certain level. In 70 years, there has been nothing of the level of an NGMA [National Gallery of Modern Art] or a national museum. And where is a contemporary art museum?

We also have a huge battle with the word ‘contemporary’. Any time you say this is contemporary art, everyone looks down upon it. I don’t know why. They don’t realise it is tomorrow’s modern and day-after’s antiquity.

Q. Is there a growing interest among private players to promote the arts?
Unfortunately, no. I am constantly trying with friends, who are big collectors, have a long history of art, who travel well, go to biennales. But it’s not easy. There are a few stars though [who have supported the Gujral Foundation at the Venice Biennale]. If people like these believe—they may or may not be art collectors, or friends, or just do it because it’s good for their brand—it’s good enough.

I come from an artist’s family and have seen how they struggle. Most of them give up their dreams and become computer engineers, or drivers.

Once, I met a guard from Rajasthan who could sing beautifully. When I complimented him, he said that it’s his family tradition for 13 generations. It broke my heart!

I give a talk called the business of benevolence, in which I say that if you invest in benevolence it will build your brand far more than any kind of branding ever will. We know the names of Guggenheim and Tate, or the Birlas, because of the institutions they have built and left behind, which last forever. These are things that survive. Who cares how many of their products were sold?

Tweets by @forbesindia
MCX: Out of the Jignesh Shah shadow
Flaunt the Victorinox Swiss Army watch