Viney Singh, CEO of Fabindia, talks about the company's foray into food over a meal of Chinese delicacies 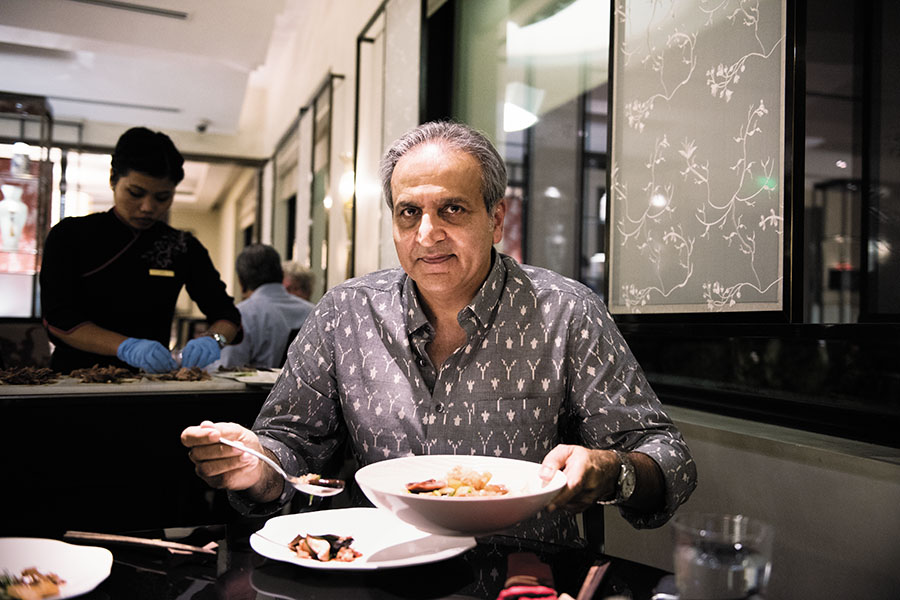 Viney Singh has been gluten-free for two years; he refused carbs and drinks at Baoshuan, the Oberoi New Delhi’s new rooftop Chinese restaurant
Image: Amit Verma
The dish of the day happens to be a tea egg—boiled to perfection in tea, in a warm water bath at a precise temperature of 63 degree Centigrade so that the yolk remains runny, the white creamy. We may have admired the egg even more, had it not come buried in a nest of shredded filo, which obscured from our view the beautiful brown veins on the egg’s surface produced by tea seeping in through a partially cracked shell. That’s what makes any Chinese tea egg a quintessential street snack. It’s like marble; a thing of beauty, joy and childlike glee. 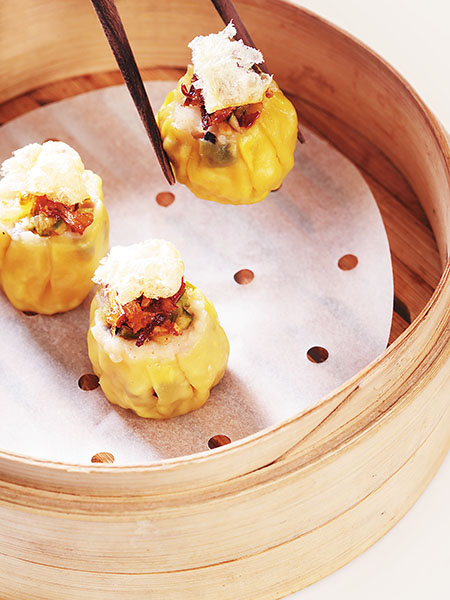 Served perfectly cooked tea eggs
Image: The Oberoi
At Baoshuan, the Oberoi New Delhi’s rather new (it opened this January) rooftop Chinese restaurant, the egg is a showy, cheffy starter. Still, I am glad we ordered it, not just because it is perfectly cooked, but also because it brings back for my guest, Viney Singh, CEO and MD of Fabindia, a host of memories.

Tea is not just a Chinese obsession. It has seeped into the Indian cultural fabric in a way few other beverages have. But Singh’s connect with it is far more than an average tea drinker’s. As a child growing up on tea estates in Assam, and then in Tamil Nadu where his father worked, Singh was exposed to the typical plantation life—a relic of Colonial times, but one that was to have an impact on his tastes and sensibilities in obvious and subtle ways.

“In Assam, we had the Baruah Mug cooks, who knew these wonderful continental dishes and bakes because they came from a line of traditional cooks who had worked in British homes and clubs,” he says of his earliest tryst with gastronomy. If Singh’s mother was table proud, entertaining lavishly, his Rajput father dabbled in weekend meat cooking, stirring age-old family recipes from their ancestral residence in Rohet Garh, near Jodhpur.
Viney Singh’s eyes lit up at the mention of prawn and pork dumpling with crackling on top
Image: The Oberoi

“Rohet Garh recipes are well known in Rajasthan. The safed maans (white meat) cooked there is acknowledged as the best among Rajput clans,” Singh says, between tales of his outdoorsy early plantation life, where sporty pursuits like horse riding and swimming were interspersed with fabulous meals, Western and traditional Indian, all cooked with fresh ingredients from the estate. “We had a small dairy. So butter, milk and ghee was always fresh, there was always country chicken on the table, and the vegetables were all grown in our kitchen garden.”

Guarding against envy, I suggest we order some more food. Singh, ever the gentleman, decides to leave it to my judgement, but his eyes light up at the mention of prawn and pork dumpling with crackling on top. 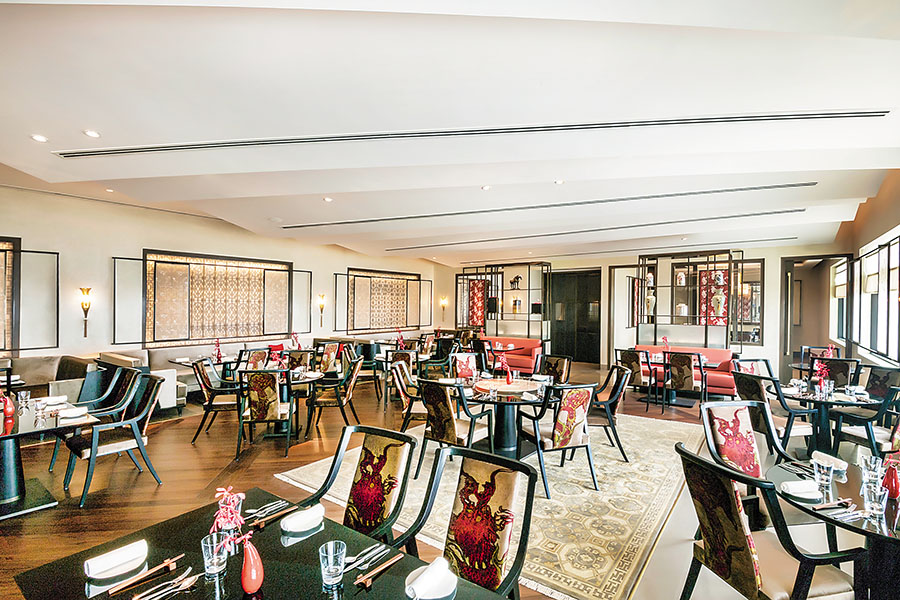 Baoshuan
Baoshuan is not really an outpost of the one Michelin Star dim sum and regional Chinese eatery A Wong in London, run by the eponymous chef who decided to take up his family’s restaurant business after a degree in anthropology from the London School of Economics. But A Wong—known for elevating traditional Chinese food to sophisticated creations using modern cooking techniques and presentations—is consultant chef to Baoshuan, and has brought in all the stars of his London menu to Delhi. I quickly zero in on these.

There is a soup dumpling filled with warm broth, with a more delicate and yet firm skin than what you may have encountered in Hong Kong’s yum cha places. There’s a bao presented on astroturf (like they do in London), which makes us spend some minutes wondering about whether the “grass” is edible (it is not). Then, there is a sensibly abridged version of the Peking duck. Instead of the whole roast duck, here they serve two legs that are carved up; enough for just two diners who will not be plagued by the guilt of wasting the rest of the bird.

Singh refuses carbs and drinks, even though he has just been telling me about a wine- and tapas-filled holiday in San Sebastian. On weekdays—we are dining on a Monday evening—he is strict, he says, with himself; a discipline that is necessary for someone who, at 58, still plays squash and takes fitness seriously (he has been gluten-free for two years now).

This interest in good food that is also healthy neatly coalesces with his latest assignment at work. Singh joined Fabindia two years ago, at a time when the company was looking at food as a serious vertical, with a potential to grow into a major source of revenue. While apparel makes up 75 percent of Fabindia’s business, food (with an accent on health, regional and local produce) is just about 6 percent. However, since this is a category that is booming, not just in India but globally, there is clearly scope to grow this vertical.

Singh will not discuss Fabindia’s recent acquisition of Organic India, saying it is a separate business and there are still internal deliberations taking place. What he points to, instead, is Fabindia’s nascent foray into the restaurants business.
The first Fab Café came up only around a year and a half ago in Delhi’s Vasant Kunj, around the same time Singh took over.

It was part of executive vice chairman and director William Bissel’s vision to develop various experience centres within each of the Fabindia outlets to create a retail destination within a single store for the entire family. These experience centres include an alteration centre with tailors for apparel, a design centre with designers who can customise home products, a wellness centre with advice on lifestyle ailments, an activity area for children, and the Fab Café. Three such centres have come up in Delhi, Mumbai and Bengaluru (which opened in August). The next two months will see nine more opening across the country, with the eventual aim to go to tier 2 and 3 cities too.

Personally involved with the scaling and structuring of this reworking of the Fabindia formula—from plain vanilla stores to experience-led ones aimed at engaging more with younger consumers—Singh’s love for what’s on the Fab Café menu is quite apparent. “There’s liver with jackfruit and banana chips, paandhi curry with multigrain paranthas, quinoa biryani, chaats made with alternate grains and even hyper local ingredients like kulat dal from Uttarakhand,” he says, referring to his lunch at the Bengaluru Fab Café’s inauguration. The menu keeps changing seasonally but is meant to be standardised across outlets pan India.

It’s interesting that Fabindia should venture into the restaurants space on its own (though it has a tie-up with an experienced hospitality professional, we are told) rather than as a tie-up with a well-known chef or restaurateur. “It is important for us to have the cafés reflect what Fabindia stands for, which is Indianness and everything natural. Sometimes, celebrity chefs and other businessmen do their own thing,” Singh explains. Interestingly, there is a standalone café too incubating in Delhi, and whether that takes off may determine another new foray for the group.

As we mull on the possibilities, the meal comes to an end. We’ve declined dessert but the restaurant sends one anyway—it is a chocolate confection filled with banana cooked in, what else, but tea! We spoon it up with the realisation that meals—and life—do tend to come a full circle.

Tweets by @forbesindia
How green is your lipstick?
Forbes India Tycoons of Tomorrow: Honouring excellence