The Dubai that was 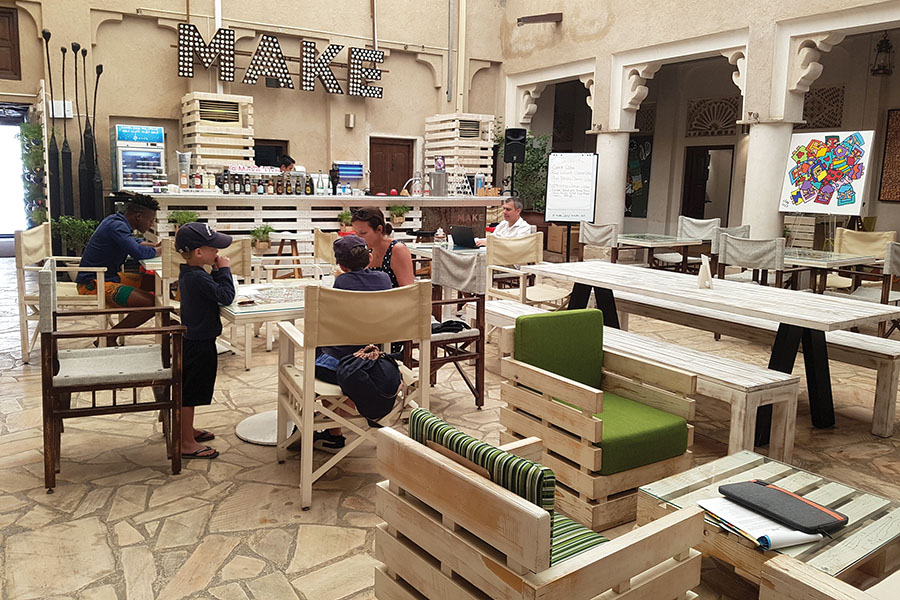 Al Bastakiya is filled with galleries, museums and cafes, such as the XVA Art Gallery
Photographs: Charukesi Ramadurai
Following my four trips to Dubai over the last decade, I thought I had seen it all. I wondered what was there to see in Dubai beyond the glitzy shopping malls with their alluring discounts through the year, and viewing the city skyline from atop the Burj Khalifa.

I had walked through the narrow lanes of old Dubai, inhaling the heady scents of saffron and cinnamon at the spice souk, and trying not to get blinded by the glitter of the yellow metal at the gold souk. I had enjoyed aerial views of the Palm Jumeirah fronds from a helicopter and swum with the sharks at the Atlantis waterpark. I had also held on for dear life as a man on a seemingly suicidal mission drove a four-wheel jeep through the vast desert bordering the city, all in the name of dune-bashing.

So, when I first heard about Al Bastakiya on my latest visit, I confess I was intrigued. In a city that prides itself on evermore newer and larger attractions, an area dating back to the mid-19th century came as a pleasant surprise. Unlike the steel-and-glass of skyscrapers elsewhere in the city, what I discover is a labyrinth of narrow alleyways with squat, earth-coloured buildings housing vibrant art galleries, cafés and guesthouses.

Since this area is ideally explored on foot, I get off my cab at the main road, near the Sheikh Mohammed Centre for Cultural Understanding. This official tourist centre hosts workshops, conducts guided walks and offers breakfast and lunch, with the aim of explaining Dubai’s traditional culture to visitors. It is mid-morning, with a couple of hours to go for lunch, so all I can manage is a quick tour of the small museum inside the building. 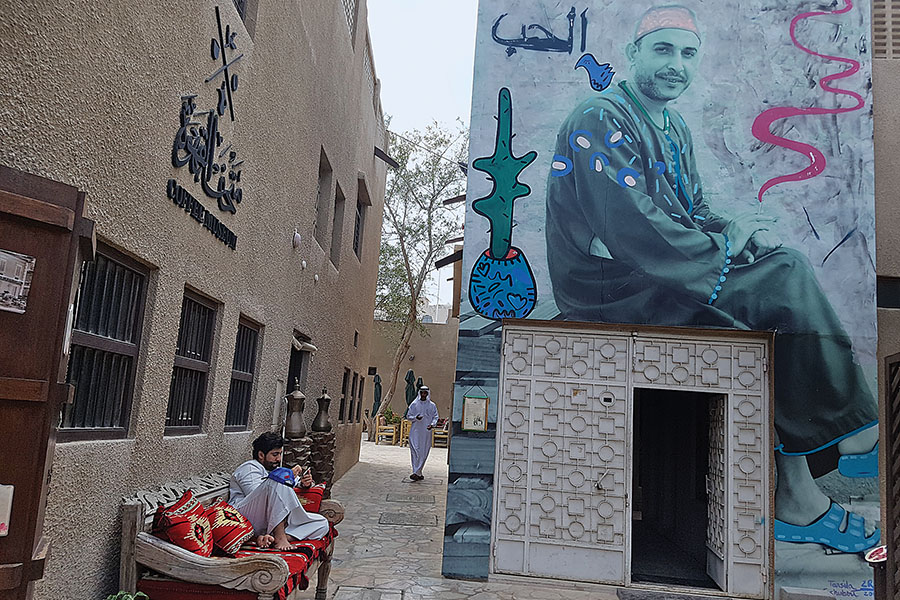 Even though I am an unannounced visitor, the local guides chat freely with me, as they pour out endless cups of Arabic gahwa, the bitterness of this coffee tempered by luscious dates and soft luqaimat (sweet dumplings made of flour). The caffeine motif follows me as I walk out of the cultural centre and turn the corner, only to come face to face with the Dubai Coffee Museum. 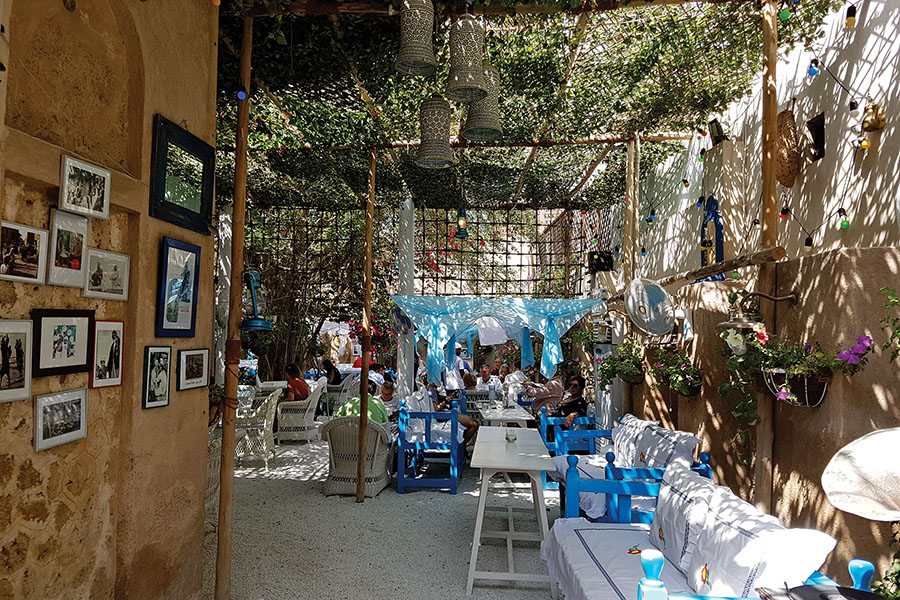 Dubai Coffee Museum is housed in a restored heritage mansion, and the Arabian Tea House
A first-of-its-kind in the Middle East, this museum was opened in 2016 and is housed in a restored heritage mansion. It is the brainchild of coffee retailer Khalid Al Mulla, who wanted to pay homage to this beverage in his own way. So, from antique implements from all over the world (coffee roasters, grinders and so on) to fascinating trivia about the history of coffee and the journey it has travelled till now, this museum turns out to be a wonderful repository of all things joe. 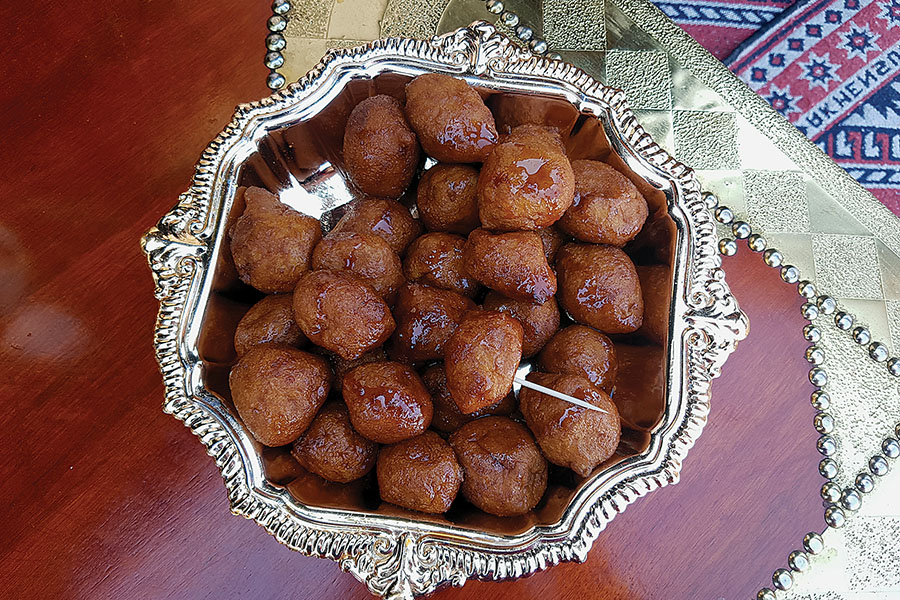 Luqaimat or Arabic donuts that are served with gahwa
Back on the street, I suddenly realise how utterly quiet and empty the neighbourhood feels. There are a few Western tourists lingering at the shop selling attar and spices in front of the museum, and an Emirati couple—she in deep black and he in pristine white—walking purposefully to some unknown place. But other than that, there is no activity, no sound. In a city that never sleeps, with the constant roar of traffic and the gleam of electric lights, this is an oasis of quiet.

Known officially as the Al Fahidi Historical Neighbourhood, this area in the old Bur Dubai region was established in the mid-19th century by pearl and textile merchants from the Persian town of Bastak (ergo, the original name Bastakiya). The story goes that Dubai’s sheikh was generous with his financial grants and tax breaks for such traders. In turn, the traders built large mansions in this neighbourhood—conveniently located by the creek called Khor Dubai, and in the midst of a significant trading route—and made this city home. At its peak, there were over 55 families settled here; the oldest of the original houses dates back to 1896 and the newest to 1955. 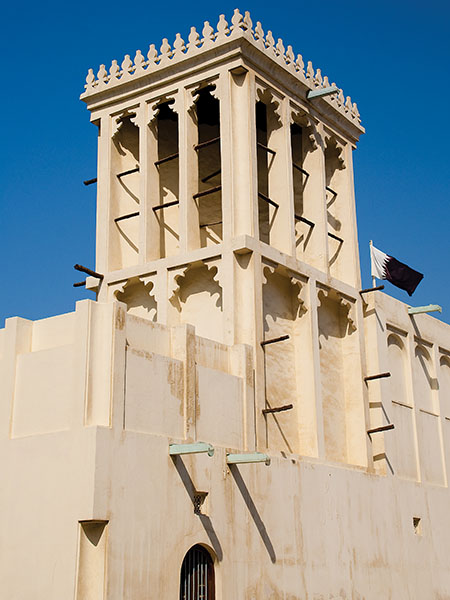 Barjeels or wind towers made of wood and stone that act as natural air-conditioners; Image: Shutterstock
The signature touch of these builders—one that immediately catches my attention as I wander through the lanes—is the ‘barjeel’, wind towers made of wood and stone. These tall towers with open vents on all four sides were placed on rooftops to capture the breeze and direct it inside the home through narrow shafts. Acting as natural air-conditioners, barjeels ensured that these homes stayed cool through the long scorching desert summers. Although air-conditioners have now taken over this modern city, these wind towers still stand at several places within Al Bastakiya, as reminders of a simpler age.

Things changed for Al Bastakiya with the discovery of oil in the Middle East in the 1970s. In fact, things changed for Dubai itself, shaping it into the glittering city of the future. The original settlers had started moving away by then to newer neighbourhoods, and the buildings slowly fell into disrepair. Most of them were pulled down to make space for commercial buildings such as offices and warehouses. By 1989, it seemed like the end was near, with Dubai Municipality authorising the demolition of whatever remained of the area.

Al Bastakiya found unexpected succour through a foreigner living in the city, British architect Rayner Otter. Like the merchants who created this area, Otter had also found a home there, and was dismayed when he heard about the proposed plan to raze the old buildings.

He took up this cause, even appealing to Prince Charles during the latter’s visit to Dubai in 1989, and showed him the neighbourhood. The prince was charmed, and intervened with the Dubai government. Finally, in 2005, the project to restore and revive the area took shape. The effort was spearheaded by Rashad Bukhash, director of the Architectural Heritage Department, who had overseen over 140 restoration projects in Dubai. The restoration work, which ended in 2008, transformed the heritage neighbourhood into a tourist attraction, with none of its inhabitants residing there any longer.

Walking around the district, getting lost in its perpendicular lanes and peeping into quirky art galleries with large open courtyards (another common feature of these buildings), I find it difficult to believe these mansions were in a state of utter dilapidation until a decade ago. Today it wears the breezy charm of the perfect hipster hub, with its street art and installations. I even turn a sudden corner and see a disembodied pair of hands reading a book outside a closed window of some unnamed structure. Along the same road, I see matchstick figures of papier maché trying to climb up the high walls of another such building.

Feeling a bit like Alice, I walk into any open gate, discovering buzzing cafés inside vast courtyards dotted with white wicker chairs and sprawling trees, and hidden art galleries showcasing a wide range of work from both Middle Eastern and international artists. Prominent spaces like the XVA gallery—that comes with an art hotel and a café—and the Majlis Gallery, the UAE’s oldest, are nonchalant about visitors walking in to check out their displays.

That’s how I come across the stunning exhibition of shadow sculpture by Bassam and Maysoon, two Jordanian artists living in the UAE. It is tucked away in a small room at the Alserkal Cultural Foundation, considered one of the city’s most significant galleries.

The most delightful serendipity, though, comes in the form of the Arabian Tea House, formerly known as the Basta Art Café. Entering it is like coming across a slice of the Mediterranean in the Middle East, all whites and blues, billowing curtains and plump cushions, dozens of cheery paintings hanging on the tough stone walls. The café itself is in a sunny courtyard of what used to be a pearl trader’s mansion. Like the other places I have seen so far in Al Fahidi, this too is a world within a world, quiet and shaded, the silence broken only by the muted whispers of friends catching up over a meal. It is way past my lunch time by then, and so I use this as a break to rest my feet, while I tuck into a mezze platter, along with a fragrant Arabic mint tea. 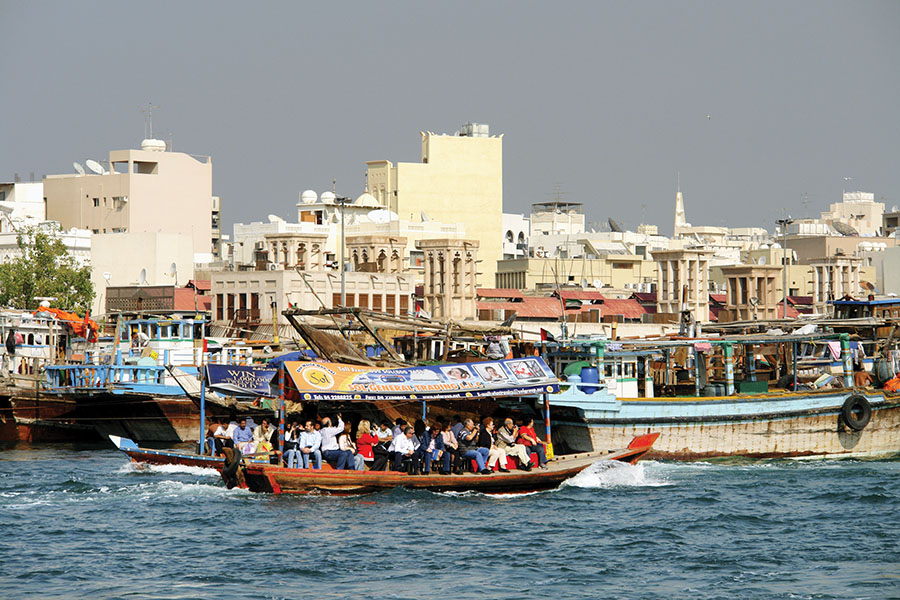 The bustling Khor Dubai
I am surprised to learn that Dubai used to be a quiet and sleepy trading port that grew along Khor Dubai. The tour of the Al Fahidi neighbourhood has managed to take me to a corner of Dubai I had never expected to see. All it took me was short taxi ride from the bustle of the city’s main thoroughfares, and within minutes the sights and sounds of the Dubai I had come to know so well seemed a distant memory.