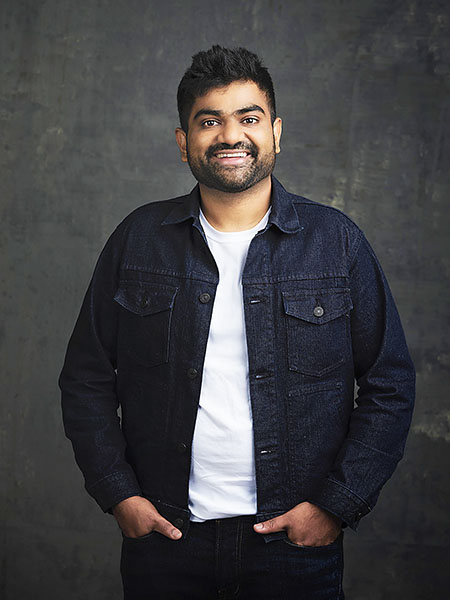 After Freshworks, Achuthanand Tanjore Ravi worked at Uber and Stripe before co-founding Kula.ai

While Girish Mathrubootham became the most prominent face of India’s SaaS sector, in the same way as he came out of Zoho Corp, a new generation of entrepreneurs is stepping out of Freshworks, getting funded, and building software for global markets. Some have even stepped out, started something interesting, sold it back to Freshworks, only to jump back into the entrepreneurial arena. Here are three such ventures that have recently come to the fore.

Achuthanand Tanjore Ravi did a deep dive into talent acquisition, working with Girish Mathrubootham from when Freshworks had less than 90 employees and right up to when it had reached more than 900. He then went off to work for Uber and then Stripe, doing more work as a recruiter for these companies’ international operations.

All of that, over some seven years or so, gave him first-hand experience about every difficulty faced by recruiters. Last year, he started Kula.ai to solve some of those problems.
He has teamed up with Sathappan Muthupalaniappan, engineer no. 3 at Freshworks, and later an engineering leader at Grab, and Suman Kumar Dey, an early member of the infrastructure team at Freshworks and Grab, and architect at Salesforce.
The trio was based in Singapore when they started thinking about Kula, which they launched in August 2021 in ‘stealth’ mode—as startup founders like to say. By February this year, they had about 30 customers trying out their product in beta mode. They expect to make Kula generally available in June. 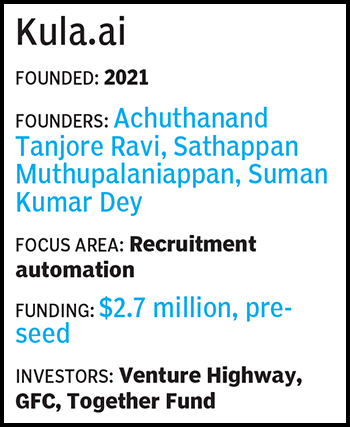 This January, they also announced $2.7 million in pre-seed funding from Venture Highway, Global Founders Capital and Together Fund, the venture capital (VC) firm set up by Mathrubootham and his friend Manav Garg, founder of Eka Software.
“What we are building is a recruitment automation tool, built for recruiters at fast-growing organisations,” Ravi says. Before Kula, “most tools available were based on organisational workflows and systems of records, rather than being specific to a recruiter’s workflow.”
In marketing, there are literally thousands of tools available, but specific to recruiting, “we are using tools of the 1990s in the 2020s,” he says. Most tools are built to go from interviewing to on-boarding to employee management, but recruiters need a solution that helps them track requirements, find sources from where to identify candidates against those requirements, and step up the pace at which they can effectively go down the funnel from that first set of potential recruits to actual hires, Ravi says.
An important module within Kula is called ‘Circles’, which is meant to be a better way of doing referrals: Moving the conversation from ‘push’ to ‘pull’. One way Kula works is by tapping into the network of connections of a company’s existing employees, helping recruiters get “warm introductions” to candidates that other recruiters may not know about, Ravi says. This also improves the chances that a particular candidate is a good fit for a company, he adds.
A second area that Kula is attempting to automate and improve is called ‘Outreach’ which is akin to how sales professionals contact potential customers. The overall result is that recruiters can go from their current typical targets of four hires a month to six or seven hires, he says.
Today the young startup is developing tools to improve identification and engagement of potential recruits. In the future, Kula will also build tools for improving interview scheduling, and research for recruiters to help them go beyond the “usual suspects” like the top organisations in a sector or market.
With just the initial slice of potential customers that Kula wants to target—seed to Series D startups—the addressable market is more than a billion dollars, Ravi says. Therefore as Kula grows, the opportunity could be much larger. 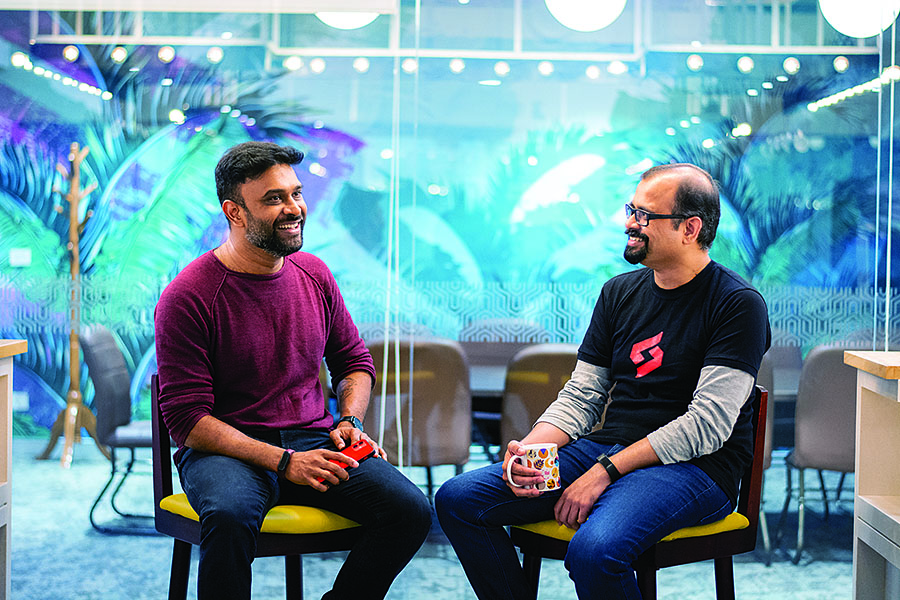 (From left) Arvind Parthiban and Jayakumar Karumbasalam, co-founders of SuperOps, raised their Series A in January this year
In the US, a managed services provider (MSP) can be a one-person shop or a thousand-strong company. This is when someone sits outside a company and provides support by managing IT infrastructure and software applications as well.
India’s biggest IT services giants do this a lot, for their large corporate customers.
However, there is also a large market for providing this same ‘professional service automation’, basically an IT help-desk software, and ‘remote monitoring and management’ to the one-person micro entrepreneur and the 5-to-10-person small and medium-sized managed services providers. This is the segment that SuperOps.ai initially wants to go after, with its cloud software for SMB segment MSPs. 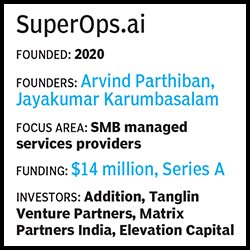 “I’ve been in IT all my life, from Zoho to Freshworks,” says Arvind Parthiban, founder and CEO of SuperOps.ai, which he co-founded with friend Jayakumar Karumbasalam. “After the pandemic, with the distributed workforce, people have moved around, which is a challenge for [in-house] IT teams.” This has also raised the demand for local MSPs, because in addition to providing infrastructure, like laptops or Wi-Fi connections, a company’s IT team must also ensure security. “So I thought I could take my learnings from IT and apply them to managed services,” Parthiban says.
Thus emerged SuperOps.ai, a unified professional services automation and remote monitoring and management platform. It took the company two years to get to general availability of its product, given that Parthiban is going after a very mature 30-year-old market. The platform was available in beta testing mode from May 2021, and by January, over 30 customers were using it. Parthiban also asked for help from some 150 potential customers in developing SuperOps, and it was built in close collaboration with the ‘community’, as tech companies call the extended network of users and developers.
The first release itself comprises several products, instead of being a minimum viable product—a help desk, project management, IT documentation, remote monitoring and so on. It’s also added innovative touches like intelligent alerting to highlight the alert that is most critical.
In January, SuperOps announced it raised $14 million in series A funding, led by Addition and Tanglin Venture Partners, with participation from existing investors Matrix Partners India and Elevation Capital, and a bunch of angel investors.
Over the next 12 to 18 months, Parthiban expects to go deeper into each of the products that makes up the SuperOps platform today. He also wants to invest in infusing artificial intelligence (AI) into the platform. He has already tapped a senior executive to sell SuperOps subscriptions to customers in the US.
Parthiban has known Mathrubootham for over 17 years. In fact, before SuperOps, he came out of Freshworks to build Zarget, where he developed a website optimisation solution that Mathrubootham invested in. Later Freshworks acquired Zarget.
At SuperOps, Parthiban expects to move up from monitoring IT hardware to include monitoring software applications as well. “The future, it’s an ocean,” he says. 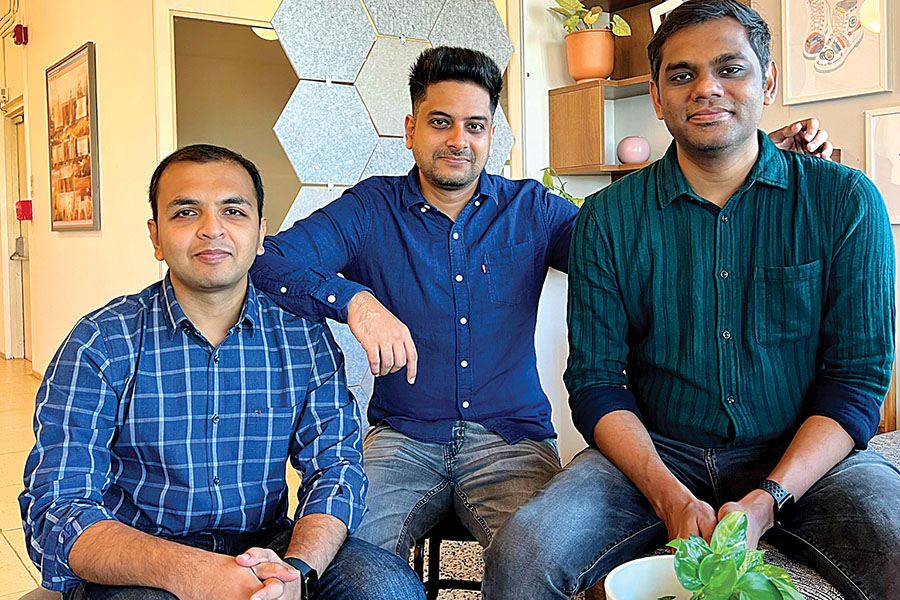 (From left) Srikrishnan Ganesan, Deepak Balasubramanyam and Vignesh Girishankar had earlier built Konotor, an in-app messenger, which was acquired by Freshworks in 2015
The year was 2020. As the world closed borders, a bunch of us got on Zoom to work in close quarters. Ain’t nobody thought that we’d build a startup in fast forward... It just feels like yesterday when we launched Rocketlane.’
Those are lines off the top of a rap song titled ‘Rocketlane, Our Story So Far’, featuring Rahul Sridhar, a content marketer and budding rapper at the Silicon Valley and Chennai startup, to celebrate its first big funding round—$18 million in Series A investment. The idea for Rocketlane, a purpose-built collaborative customer on-boarding tool, had come from its three founders’ own problems with on-boarding customers at Freshchat.
Srikrishnan Ganesan, Deepak Balasubramanyam and Vignesh Girishankar had built Konotor, an in-app messenger that was acquired by Freshworks, in 2015, and relaunched as Freshchat. They stepped out to build Rocketlane, in April 2020. The day they launched the product, on June 23, 2021, it became the no. 1 ‘Product of The Day’ on Product Hunt—a Silicon Valley-based tech site for serious product enthusiasts. 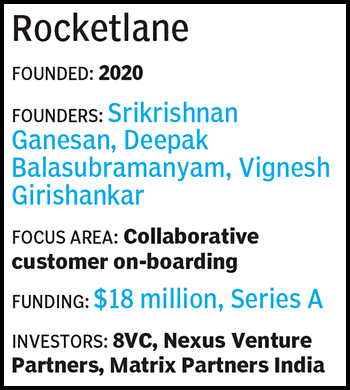 “Today, people do this using spread sheets, project management tools, Slack, email and so on, and if you are a high-growth company with large customers, your team is going to be overwhelmed at some point,” says Ganesan, CEO. “Someone’s going to drop the ball and overall the experience will be a hit or miss for your customers… that’s what we want to fix.”
Rocketlane itself has been growing fast, adding paying customers, including some of India’s well-known ventures such as Chargebee, Netcore and Delhivery. ‘Thanks to all our customers for showing us the love,’ raps Sridhar, in the song—they made a video featuring him and put it up on YouTube.
The Series A, in January, was led by 8VC, with participation from Nexus Venture Partners, Matrix Partners India, and angel investor Gokul Rajaram, a prominent software product specialist and investor in Silicon Valley. Along with their seed round, about seven months earlier, Rocketlane has $21 million to ramp up growth.
More recently, the team released an online, self-assessment tool for customer on-boarding teams. Anyone can use the free tool to get a score that tells them something about where they need to improve.
With money from the funding, the next 12 to 18 months will see Rocketlane put in place more mature processes, and hire the right leaders for the right roles to ensure the startup can function like a more organised company, Ganesan says.
In the slightly longer term, Rocketlane’s founders see themselves expanding into areas including client project delivery, which is a big market, while holding on to their aim of becoming the default provider of customer on-boarding tools. ‘In like five, 10 years all of this will be a flashback, Like homie G, might have a listing on the Nasdaq.’