SaaS rising: India is ready for its next IT moment

Companies in the sector are building some of the underpinnings of the internet economy of the future. With strong companies, entrepreneurs, and women leaders in the fray, the sector is the latest sunrise industry in India and making the country a software product leader 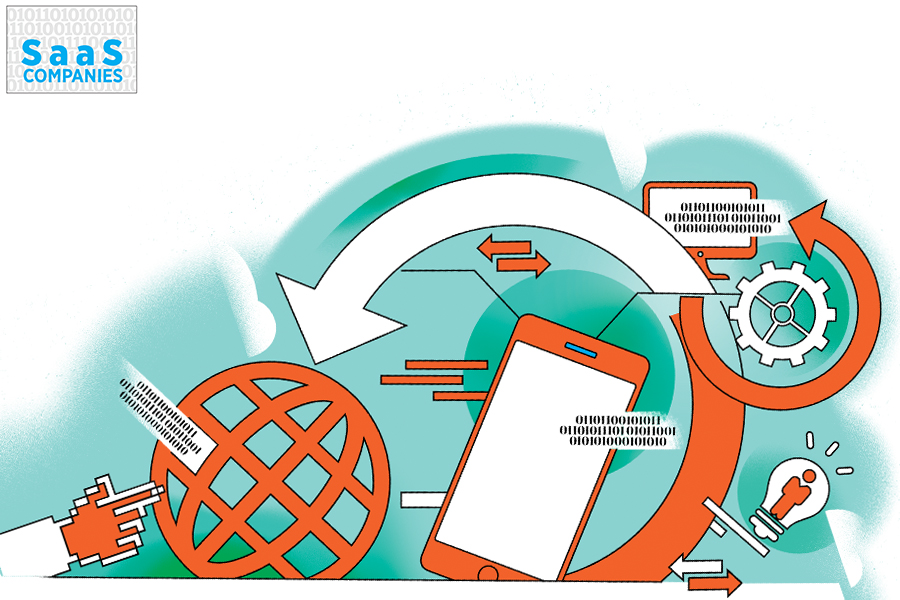 Projections for the SaaS sector range from $70 billion in 2030 to more than $100 billion in the next five years.

Arising tide lifts all boats—an aphorism we could apply to India’s young software-as-a-service (SaaS) sector. It feels like every cloud software idea is being funded, and there are, literally, multiple unicorns being anointed by their exuberant investors every month, in just this one sector, even as predictions are rampant that this year, the number of unicorns across India’s startup scene will cross the 100 mark.
While startups in some other sectors have seen drastic layoffs, in SaaS, five companies turned unicorns—privately valued at $1 billion or more—in the first three months of 2022, and several more are in the ‘soonicorn’ list.

Some of the new unicorns, like Amagi and Uniphore, are the result of successful exercises by their founders to adapt to the changing world. Both started out differently, but switched to the SaaS model, and are beginning to reap the benefits.
Others, like Hasura, are part of a new generation of Indian-founder-led, born-to-the-cloud ventures that are becoming ‘category leaders’ as they like to say in startup jargon.
Once upon a time, the young owner of a vegetable oil company in a little known town called Amalner, another who borrowed Rs 10,000 from his wife to start a new company in Pune, a gang of plucky engineers who stepped out from a clothing mill in Delhi and a corporate executive from Mumbai, who became legendary for his far-thinkingness later, all started ventures in uncertain times—the economy was closed, bureaucracy and ‘Licence Raj’ ruled—that became icons of modern India.
And even as India’s IT services industry rose from strength to strength, weathering three US recessions in this century alone, another young man, from Chennai, was plugging away at his vision of a software products company. Zoho is today a hugely profitable cloud software products company that India can call its own.
And a Zoho alumnus gave India’s SaaS sector its ‘Infosys moment’ by listing his company, Freshworks, on the Nasdaq last year. Earlier this year, a young artist in Chennai, memorialised it in his rap song. And he was celebrating the Series A funding of Rocketlane, where he works, one more in the diaspora of ventures that Zoho and Freshworks continue to spawn.
For all that, India’s entire SaaS sector will fit into one quarter’s sales at Salesforce.com, widely credited as one of the companies that pioneered the SaaS model. But among India’s SaaS entrepreneurs, ‘Iraade buland hai’ as the saying goes. And projections for the sector range from $70 billion in 2030 to more than $100 billion in the next five years.
No one would have thought India’s IT sector would cross $200 billion, or that TCS alone now wants to be a $50 billion revenue company in the not-too-distant future. An old idea that more recently was made famous by Amazon is that people overestimate what’s possible in the short term, but underestimate what’s doable in the long run. Just look at Amazon Web Services.
Now imagine what might be possible at Icertis, and BrowserStack, and Uniphore in 10 years, or longer. Sure, corporate history is replete with giants disappearing from the face of the Earth. But, if we set aside what we can’t control, for a moment, it may come as no surprise that what was started by Sridhar Vembu, and then Girish Mathrubootham, Samir Bodas and Monish Darda, and then Ritesh Arora and Nakul Aggarwal, and then Tanmai Gopal and Rajoshi Ghosh, grew into an industry that made India a software products nation.
Take a look at the S&P 500 and it reflects one important way things are different today—eight of the top 10 companies on it are tech companies. Every company in the future will become a tech company, all the experts say. And that is one reason why India’s SaaS sector will have a very bright future. Companies in this sector are building some of the underpinnings of the internet economy of the future. Icertis is building AI-based autonomous contract management systems; BrowserStack wants to be the cloud testing infrastructure for the internet itself.
The Indian SaaS sector is also surfacing strong women leaders in tech. From Ashwini Asokan’s AI venture to Prukalpa Sankar’s data management success to Shruti Kapoor’s sales intelligence startup and Kausambi Manjita’s outsized vision at Mason, to seed-stage ventures that are just starting out, such as Looppanel and Rowy, started by Kritika Oberoi and Harini Janakiraman, respectively—both part of Sequoia’s Spark programme—the number of women in SaaS is set to explode.
Talent is the sector’s biggest challenge. Everyone is on a blitzkrieg of hiring, and those competing for the same pool include the SaaS startups, other deeply-funded startups, foreign companies like Salesforce and Atlassian with growing Indian operations, the big tech companies, India-based global R&D centres of pretty much the global 2000, and beyond, and of course, India’s IT services industry.
There’s more money for the SaaS sector in India today. Venture capital (VC) firm Chiratae and consultancy Zinnov estimated recently that the sector will get 62 percent more money this year to touch $6.5 billion in funding versus last year. The average investment deal size more than doubled to $56 million in 2021 versus 2020, they said in a report.
But the money, and the desire for quick success, is pushing some entrepreneurs in very undesirable directions, Arora and Aggarwal at BrowserStack warn. In their own instance, another company—funded by a Tier-1 VC firm—has attempted to bribe some of their staff to download and handover their core software, the duo tells Forbes India.
Behind the glamour and the money, entrepreneurship is about perseverance and grit in the face of enormous challenges, Uniphore’s founders Umesh Sachdev and Ravi Saraogi can tell you. They persevered, and now they are on the cusp of redefining what conversational AI can be.
And it would be wise to constantly keep asking one of Bodas’s favourite questions: ‘Do you want go far or do you want to go fast?’
For now, the SaaS mantra is, ‘Made in India, for the world’. Glamorous as that sounds, one mundane reason for it is that recurring billing in India is painful for these startups. And Indian businesses, in general, continue to be unwilling to pay for cool software.
But companies like Khatabook are persevering and there will be others, and when they have gone sufficiently far, India too will embrace these unreasonable people. And one day, they may not need to incorporate in Delaware or be headquartered in San Mateo. More power to them.

(This story appears in the 20 May, 2022 issue of Forbes India. To visit our Archives, click here.)

Tweets by @forbesindia
Photo of the day: Calm after the storm?
Tinder parent takes Google app store war to court in US