The evolution of IT to Saas in India

Our special package this fortnight is on the post-Zoho effect: A flourishing SaaS sector with around 1,500 companies clocking over $2 billion in annual revenues 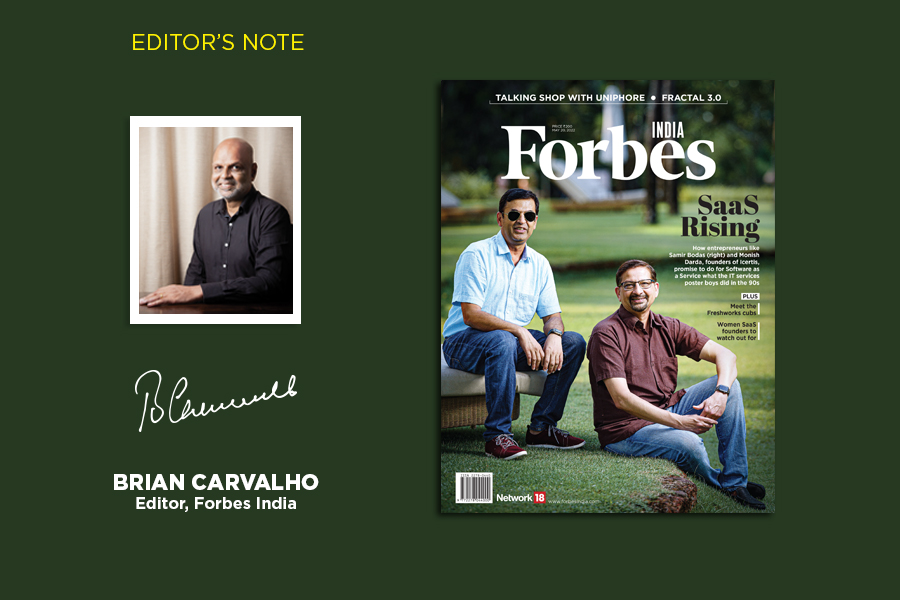 It is tempting to compare the evolution of the Indian IT services sector from the early 70s to that of the now-burgeoning software as a service (SaaS) pie. It was in the late 60s that TCS, led by technocrat Faqir Chand Kohli, took wing as a management and technology consultancy; in five years, in 1972, the Tata Sons division would go on to fulfill India’s first offshore software delivery contract, for American business equipment maker Burroughs.

It was around this time that another Indian IT services pioneer, the late Narendra Patni, founded Patni Computer Systems (PCS) to offer something similar—outsourced software services and offshore services out of India. The IIT-Roorkee and MIT-educated Patni hired three gentlemen who would decades later become the poster boys of Indian IT services: NR Narayana Murthy, Nandan Nilekani and S Gopalakrishnan. Along with four more, they founded Infosys in the early 80s.

Between Patni and Infosys came along Wipro, born out of a three-decade-old vegetable and refined oil business founded in Amalner in Maharashtra’s Jalgaon district. The emergence of these IT services bellwethers would go on to give birth to a bustling sector—Business Process Outsourcing joined the party in the 90s—that was worth some $227 billion as of the last fiscal.
From TCS and Patni, fast forward to the mid-2000s, when India’s SaaS pioneer Zoho was getting its act together as a business software solutions firm. By the end of that decade, the Sridhar Vembu-founded company was doing $100 million in revenue—enough for the SaaS bandwagon to begin to roll. Uniphore, founded by Umesh Sachdev and Ravi Saraogi in 2008, was incubated at IIT-Madras. Like Zoho—whose origins lie in telecom software entity AdventNet Inc founded in the mid-90s—Uniphore went through multiple pivots before turning into a SaaS operation.

Around the same time, in 2010, Girish Mathrubootham and Shan Krishnasamy founded Freshworks (then Freshdesk) and began work on a user-focussed cloud-based customer service software. In September 2021, Freshworks listed on the Nasdaq at a valuation upwards of $12 billion.

If Infosys’s Murthy & Co got inspired to start up at pioneer Patni’s gig, Freshworks’ founders got to grips with SaaS at Zoho, where they worked in product management. It was somewhat uncanny, therefore, when, around IPO time, Mathrubootham told Forbes India’s Tech Editor Harichandan Arakali that he wanted Freshworks to be like the Infosys for IT services. “We want to be that company for SaaS products.”

Forbes India has run cover stories on Zoho and Freshworks in the past, the most recent on the latter after the sizzling September debut on the Nasdaq (the share price at the time of writing, though, was down to roughly half of the IPO offer price). Our special package this fortnight put together by Arakali is on the post-Zoho effect: A flourishing SaaS sector with around 1,500 companies clocking over $2 billion in annual revenues. SaaSBOOMi, an industry lobby, reckons that figure could grow to $50 billion to $70 billion by 2030, in the process creating value of $500 billion to $1 trillion. Arakali and team shine a light on some of the most promising names in the world of SaaS.

The cover story is on Icertis, a contract management software provider to the world’s biggest companies, and how it has its sights trained on $200 million in annual revenue. These may just be the initial laps. As Manav Garg, founder & CEO of Eka Software, writes on page 66: “There is a huge opportunity to build multiple billion-dollar companies.” For more, dive into the SaaS package that begins on page 18.
Best,
Brian Carvalho
Editor, Forbes India
Email: Brian.Carvalho@nw18.com
Twitter ID: @Brianc_Ed

(This story appears in the 20 May, 2022 issue of Forbes India. To visit our Archives, click here.)

Tweets by @forbesindia
Photo of the day: Happy Mother's day
LTI and Mindtree to merge, forming a $3.5 bln revenue company as IT services demand kicks into high gear