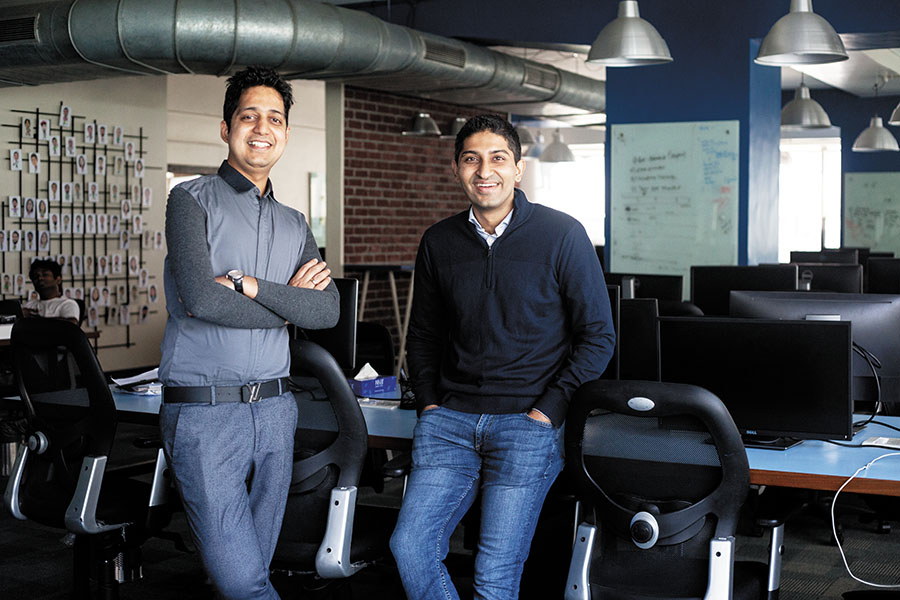 Nakul Aggarwal (left) and Ritesh Arora’s BrowserStack received a $50 million Series A investment from Accel this year
Image: Aditi Tailang
It was during an argument over software testing for their third startup, consulting gig Downcase, in 2011 that Ritesh Arora and Nakul Aggarwal, both IIT Bombay graduates, had an epiphany. Aggarwal had taken on testing the previous two times and didn’t want to do the thankless job again.

The argument spawned a business idea that not only turned profitable in six months after going commercial, but also made browser and app testing painless for 2 million designers, developers and testers, say Aggarwal (32), and Arora (33).

At their modest office in Mumbai’s Andheri, Arora, CEO, and Aggarwal, CTO, recalled how they worked for four months to build a beta version of BrowserStack, a cross-browser and app testing platform. When they notched up 10,000 beta users in the following few months, they launched the commercial version.

“No one likes to test. You just want to write code, you want to build cool stuff, you don’t want to test it,” Shailesh Rao, the company’s new chief operating officer, who took on the role in January, tells Forbes India. “But you can’t avoid testing.” Rao, until recently, was a senior director with Google’s cloud business, and later at product operations.

He is expanding BrowserStack’s San Francisco office, from where he will oversee the company’s global market push.

The ability to test a piece of software on anything, from a laptop using an old version of Microsoft’s Windows XP, say, to the latest iOS operating system on Apple’s iPhone X or the many versions of Android on a multitude of phone models, has made BrowserStack indispensable to customers.

A large bank, which Aggarwal didn’t name due to client confidentiality, was able to release certain pieces of consumer-facing software only once a week because testing was taking up to two days each time. “They bought a bunch of parallel threads from us and were able to bring it down to two hours,” he says. Another large customer has a 250-strong team of engineers who have built their own suite of tests using BrowserStack’s products.

“They write code, submit it, get the results, so this pipeline of development with continuous integration, continuous delivery, that’s the next big thing for agile-software developers,” says Rao.

He adds that due to the rapid development and deployment of software they support, the “continuous integration, continuous delivery” that BrowserStack facilitates is becoming “one of the top priorities for every VP of engineering or CIO”. In addition to his base in San Francisco, he will also seek new customers in Europe, the largest market for BrowserStack after the US. The software company already has a base in Ireland for software development.

In January, BrowserStack received a $50 million Series A investment from Accel, but not before the venture capital firm courted them for six years. “We first met BrowserStack’s founders back in 2012 and immediately recognised they were on to something special… reminded us of the other great bootstrapped businesses across our portfolio,” Shekhar Kirani, Nate Niparko and Ryan Sweeney, the Accel partners involved in the deal, wrote in a blog post on January 30, announcing the investment. Sweeney joined BrowserStack’s board of directors.

Aggarwal and Arora declined to discuss their revenues or the valuation that Accel’s investment brought them. However, they added that their technology already supports 60 million tests a month today, which is more than double the volume they were handling 12 months ago.

“Every company is becoming a software company, and every human activity will increasingly be touched by software,” Arora says. “Software will become mission critical in many areas” and BrowserStack is rising to eliminate one of the most important pain points in the rapid deployment of software, which is testing, he adds.

BrowserStack is a prime example of how an Indian software company, focused on solving large problems for enterprise customers, can make it big on a global scale. This B2B software-as-a-service opportunity is real, experts agree.

India has a large pool of engineers, capable of delivering global quality at Indian costs, Rajiv Gupta, who leads the technology advantage practice at the Indian unit of business consultancy Boston Consulting Group, said in an email. India also has a large pool of inside sales force, meaning an English-speaking call-centre workforce, “apt for SaaS startups to build in-house sales teams”, he said. Finally, while companies such as BrowserStack have focussed more on the US and Europe, India is itself becoming a “sizeable” domestic market, he added.

That said, it would be wrong to think it will all be smooth sailing ahead for the company, which even survived a hacker attack early in its life. “Engineering is still India’s strength, but not a lot of products are built here,” Aggarwal says.

Today BrowserStack has about 125 employees, but building that team wasn’t easy. “Getting that mindset, let’s say for a product function (people who can define and conceptualise a product), was very challenging,” says Aggarwal. There are some of them at BrowserStack because, “we’re solving real-world problems, which attracted them”. “But there aren’t many of them around,” adds Rao.

However, with Accel’s money in the bank and its own well-established reputation, BrowserStack shouldn’t have much to worry on that count. “We don’t have the financing problem, we don’t have the market-opportunity problem or the product-market-fit problem,” Arora says. “It’s going to be all about scale and people.”