How Chargebee became a unicorn in the subscription billing business

For a startup that spent its first four years figuring out a growth path, it took clarity, customer focus, and a leap of faith to make it big in the global market 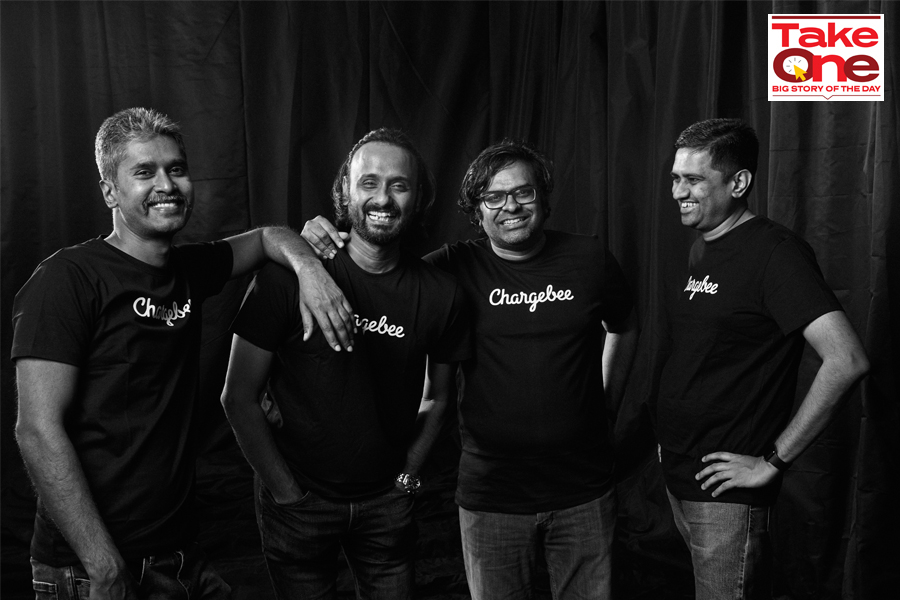 The breakfast meeting started at 8:30 am sharp. The venue—a vegetarian restaurant in Chennai—was recommended by Krish Subramanian, one of the co-founders of fledgling startup Chargebee, a subscription billing and revenue management platform that was just over a year into operations toward the end of 2012.

The guest, Shekhar Kirani, didn’t question the choice. The stirring aroma of South Indian filter coffee was perhaps the best stimulant for the partner at marquee venture capital firm Accel to know more about the passionate founding team at Chargebee, which was introduced to the venture capitalist by Girish Mathrubootham of Freshworks (then known as Freshdesk). “He was getting to know us,” recalls Subramanian, who had no intention of raising money. The venture then was bootstrapped.
Kirani, for his part, also didn’t intend to invest. Subramanian and the team was just starting out, had a few Indian and global customers, and the rookie founders were early in their game. “I was trying to figure out how big this startup can become,” he says. The first meeting triggered a series of interactions over the next nine months. “This might seem a lot of time to make a decision to invest,” says Kirani. “But it wasn’t about a decision to invest at all.”

The guest and the host were investing time as meetings morphed into question and answer sessions. Kirani consistently probed the team with three questions: Why, who and what. Who is the customer? Why can't somebody build it themselves? What is the unique value that Chargebee brings to subscription businesses? The VC framed his questions on the basis of rich experience, and real-life examples. Freshworks then had six engineers, and one of them was building exclusively what Chargebee would offer to customers. Questions like ‘why would people pay, and stay,’ and ‘why won’t they set it up one time, and leave’ was something that needed a convincing answer.
Subramanian didn’t mind being in the firing line. Reason: Hard questions helped the rookie co-founder and his team get the basics right. The first-time founders had not thought about many of these questions.
It was okay for the bootstrapped guys to find more customers, and as long as somebody was willing to pay, they did not worry about the long-term stickiness of the product or churn risk. “These were things we had not anticipated or did not even worry about,” says Subramanian. When Chargebee started, it was grappling with a different kind of question: ‘Will anybody pay’ was more crucial than ‘why would anybody pay’. Kirani, he maintains, questioned the team to think about the long-term aspects of the market and the opportunity.
Cut to April 2021. Chargebee seems to have found answers to all the questions that were hurled at them a decade ago. The subscription billing and revenue management startup raised $125 million in a Series G round of funding co-led by Sapphire Ventures, Tiger Global and Insight Venture Partners and Steadview Capital.
The round, which valued Chargebee at $1.4 billion and crowned it as the 11th unicorn of India in 2021, saw the valuation of the SaaS (software as a service) firm triple in less than six months. Chargebee, which has been consistently raising funds every year since 2018, now automates revenue operations of over 3,000 high-growth subscription-based businesses from startups to enterprises across 60 countries. The heady valuation comes on the back of substantial growth. “We have continued to grow 100 percent year-on-year,” claims Subramanian, declining to share the revenue.

The company, says one of the investors requesting anonymity, is on track to strike an annual recurring revenue of $70 million. For a company which used the first four years to figure out the path of growth—from launching the product to achieving the right product-market fit in terms of quality of customers, and focusing on the right set of segments—the pace of growth has been exceptional.
Kirani, though, never bothered about the gross margins of the startup. “I did that calculation once and then forgot about it,” he says. Reason: The team was efficient and frugal. “I knew this was something they would never have a problem with,” he says.
What made Kirani finally come onboard—Accel invested in 2013—was a realisation that Chargebee had figured out what they were, and who they were for. In fact, the team also had figured out an answer to another elementary question: Why the customer should choose them and not someone else. The team had three answers, and the roots of at least a couple of them were already in their DNA.
First, Subramanian and team wanted to focus on customer success, and even in the early days were discussing 24X7 support. “They talked about fanatic customer support,” says Kirani. The second thing was understanding that the API [Application Programming Interface] should be fluent and smooth, since the product relied heavily on working with other products. The team understood that and focused on making the integrations butter-smooth. “Their aim was to make it ridiculously easy,” he says, recalling what KP Saravanan, one of the co-founders of Chargebee, once told him. The API, Saravanan believed, should be like poetry. It has to flow. The third was the efficiency and frugality of the operation. The team obsessed over servers, webhooks speed, and ultimately, availability. 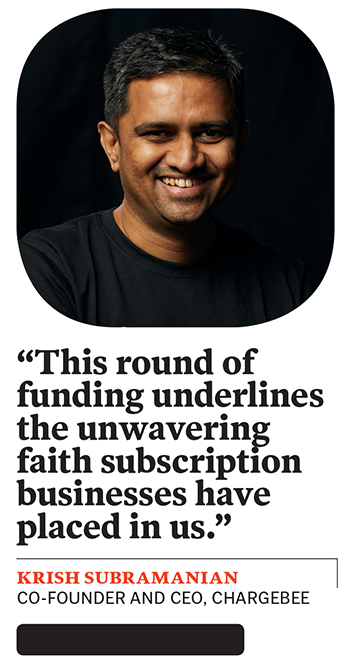 Analysts are not surprised with the brisk pace of the startup. Chargebee, they reckon, has made most of a booming subscription billing business across the world by focusing on the global market. Businesses globally—from big companies like Google, Amazon and SAP to smaller players and startups—offer subscription services of some kind. The pandemic year has seen a sharp shift to subscription-first models as they grow in popularity. Subscription billing has massive headroom for growth.
“Revenue models are becoming complex and a lot of recurring revenue isn’t a flat recurring revenue anymore,” points out Shivathilak Tallam, senior investment associate at Unitus Ventures. The new models, he says, have tiered pricing, engagement pricing, pricing based on API calls and other complex ways to price a product. While it is subscription, it’s a variable subscription model and managing this manually becomes impossible with scale. As more companies shift to recurring revenue bundles and pay-as-you-go models, solutions like Chargebee become necessary to manage billing and reconciliation, believes Tallam.
What's worked well for Chargebee is that it has managed to simplify subscription revenue billing, reconciliation and invoicing. “These highly manual processes were prone to errors and delays which have been solved with technology,” says Tallam. Just a basic reconciliation of invoice amount and bank statements, coupled with tax treatment for TDS, can become very complicated to do at scale.

Subramanian, for his part, managed to scale the venture by getting a few things right from day one. First was having clarity. The team could have gotten carried away by the first 100 or 200 customers. It's very easy, he underlines, to get tempted to pour gasoline the moment something starts working without knowing why it's working or what is really working.
“We could have poured more money to get more customers,” he says. Fortunately, that didn’t happen. The team focused on the quality of the customers and their nature: How they were similar and dissimilar. In SaaS, Subramanian explains, it's about finding more similar customers. You can have product-market fit in multiple segments, but if you're trying to do it for 100 customers across multiple segments, and you think you have product-market fit, the problem starts when there is no clarity on which segment one is focusing on.
For Chargebee, the initial choice was to pick between the SaaS market and ecommerce subscriptions. Subramanian and his team took the first bet on B2B SaaS companies. The idea was simple: Scale the segment, and nail the product before coming back into the ecommerce segment. “That decision in hindsight was very useful,” says Subramanian, adding that over 70 percent of customers of Chargebee are SaaS companies.
So what next after turning unicorn? An Initial Public Offering [IPO], or being a part of a bigger company, or continuing with the solo journey? Subramanian answers the question by evaluating every option. The first thing to ask, he underlines, is the market size. Is it large enough for Chargebee to continue growing and build a $300-500 million revenue line? “Absolutely, yes. Every business is trying to become a subscription business,” he says. Chargebee’s focus is on SMB (small and medium businesses) to mid-market businesses, and there is a very large market. “It's a nascent market with no clear leader. Blue ocean means there is a huge greenfield for us to operate,” he says.

The second thing to evaluate is growth trajectory. “We have continued to grow at 100 percent year-on-year,” he says, explaining that this kind of growth rate, unit economics and global focus makes it more attractive to say that the ideal path would be to build a company for IPO. Chargebee, Subramanian underlines, is spearheading the movement toward a subscription-first world by helping customers realise rapid value, and being an integral partner in their long-term growth journey.
Back in 2013, Rajaraman Santhanam, another co-founder of Chargebee, wanted Kirani to undertake a journey of a different kind. The VC then would frequently catch an early morning flight to Chennai for a day-meeting with Girish Mathrubootham. The meeting would start at 10 am, but Kirani would squeeze out some time to meet some of the promising startups—most of the time it was Chargebee—before his meeting with Freshworks. In one of the meetings, Santhanam sounded prophetic. “One of these days,” he remarked to Kirani, “you will come to Chennai just to meet us, and we’ll let some other startup take the breakfast slot.”
Eight years later, Kirani is hunting for a new breakfast host in Chennai as Chargebee now tops his itinerary.
​

Tweets by @forbesindia
May the 4th be with you – Preparing your sales team for the new industrial revolution
Photo of the Day: Last wisp of life