Multiple factors are coming together to accelerate the growth of India's SaaS sector, and $100 billion in annual revenues isn't a pipe dream, the managing partner at Zinnov, who heads its emerging technologies practice, writes 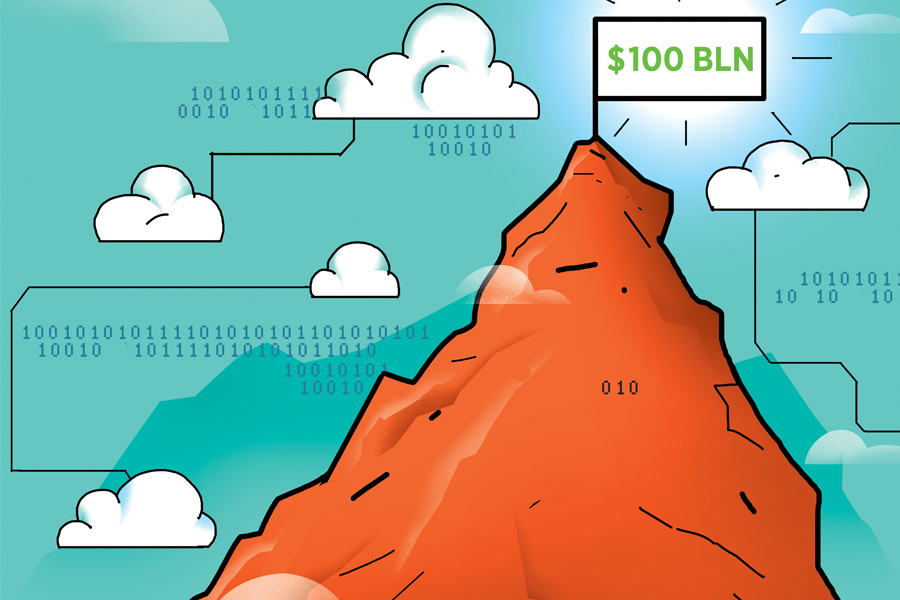 SaaS has transformed into a game changer for the India narrative on the global stage—with the ability to touch the mega milestone of $100 billion in revenue by 2026—quite effortlessly. Illustration: Sameer Pawar

Indian SaaS is having its moment in the sun. Never before have all factors converged in a manner that puts Indian SaaS firmly on the global stage, and well on its way to clocking in $100 billion in revenue by 2026. The last two decades have been phenomenal for the SaaS space, having transitioned from SaaS 1.0 in the mid-2000s, to surpassing SaaS 2.0 in the early 2010s, to experiencing its coming-of-age moment in 2021. With unicorns galore and successful public market debuts under its belt, Indian SaaS is set to transition from a pupa into a full-fledged butterfly. Interestingly, it stopped being an ‘India vs the globe’ debate a long time ago, with Indian firms becoming as global as any other SaaS firm, hiring talent where necessary, exploring newer business models to cater to global customers, and creating customer stickiness above it all. Unlike most consumer tech businesses, SaaS, in general, is more capital-efficient in nature, and the entire business model revolves around predictable recurring revenue from customers. In that sense, higher growth with lower cash burn is fast becoming a realistic milestone for many Indian SaaS firms, which in turn has resulted in higher valuation multiples for these businesses.

The last few years have been incredible for Indian SaaS—witnessing a 2X growth in the number of SaaS companies to reach 1,150+ active firms in 2021, leading to the creation of about 90 percent of all SaaS unicorns in the last four years alone. In fact, SaaS has experienced exponential growth, on the back of its robust foundational base, aided and propelled by changing enterprise behaviour, accelerated digital technology adoption, and Covid-induced disruptions and uncertainties, whose convergence is creating a tipping point that has exponential returns. 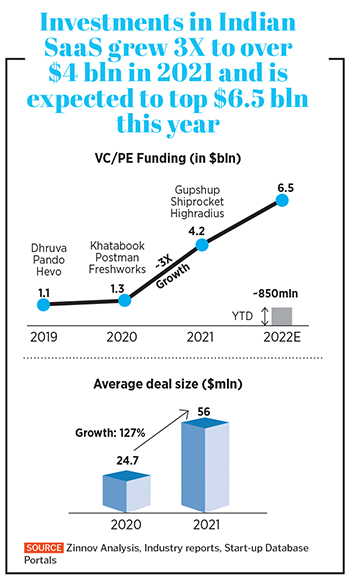 Add to this the vibrant venture capital (VC) ecosystem’s contribution to turbocharge the SaaS space, with investments growing at a 3X pace in the last year, to top $6.5 billion this year. Indian SaaS firms are attracting huge investments, and nearly 40 percent of deals at late-growth stage too, highlighting the maturity of the Indian SaaS space. Also, with the average deal sizes across stages witnessing a substantial rise, SaaS will emerge as the go-to investment opportunity for VCs in the coming years. Additionally, with the time taken for a SaaS firm to become a unicorn reduced to a mere seven years, there is immense potential for Indian SaaS firms to create exponential value to not just shareholders, but stakeholders too.These are the why we believe that the stage is set for Indian SaaS to move into the global spotlight:

The quality of SaaS firm

Historically, most Indian startup ideas have been me-toos rather than original, category-creating ones. In fact, the B2C space is filled with such me-toos, if you only look around you. The SaaS space, in comparison, has ventured into the unknown, identifying niche problems and creating solutions for them—not just horizontally across the SaaS stack, but vertical-focussed solutions. Additionally, the success of previous, trailblazing SaaS entrepreneurs and founders has created replicable playbooks for newer entrepreneurs across functions such as sales and go-to-market (GTM), organisational structure, international expansion, etc, that have helped propel the SaaS space into stratosphere. 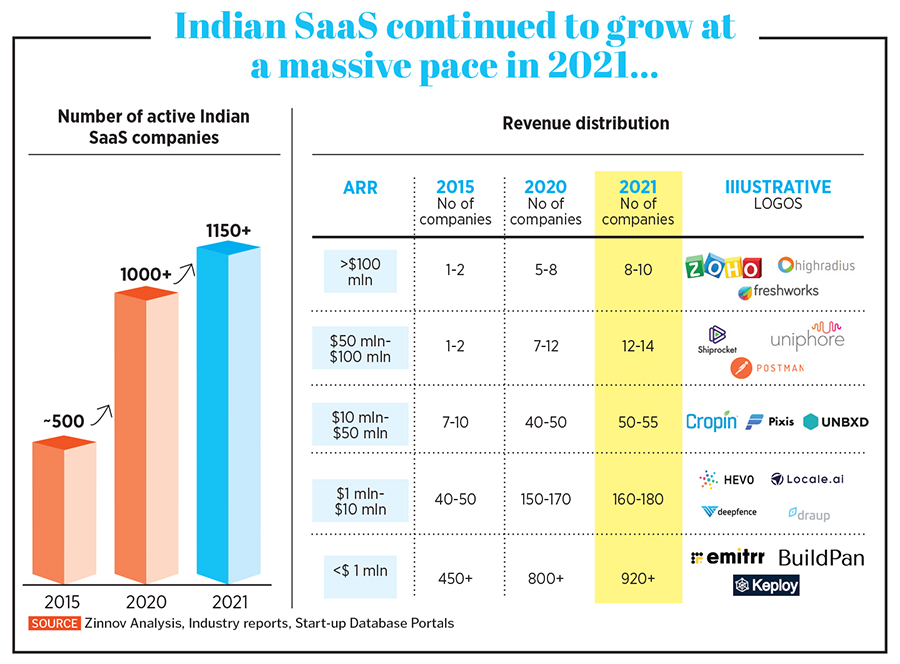 The global growth of cloud

Cloud is probably the only segment where the demand outstrips supply—enterprises are hankering after solutions for their challenges, especially in the post-pandemic business reality—from any SaaS provider around the world, including India. Enterprises are aggressively on the lookout for solutions, and when existing providers failed to address them, the attention automatically shifted to newer, emerging markets such as India, China, and Israel. Interestingly, India has outranked the UK in the number of SaaS unicorns and will surpass China to become the second-largest SaaS nation in the world in the next few years.

As the tech mafia/giants verticalise their offerings and tech stacks, the more there is going to be the need for SaaS providers to cater to the newer use cases that emerge. Indian SaaS, with its about 3 million digitally skilled talent pool and heightened interest from VCs, has become a major player in the global SaaS stage. With newer SaaS categories being explored across the stack, and the maturity of SaaS firms visible in the exceptional value unlocked through attractive exit options, Indian SaaS has matured at a furious pace and has become the go-to choice for enterprises. SaaS has transformed into a game changer for the India narrative on the global stage—with the ability to touch the mega milestone of $100 billion in revenue by 2026—quite effortlessly. Having metamorphosed from being the ‘arms and legs’ of IT to the ‘brains’ of the industry, India in general and Indian SaaS in particular, are on a clear path to becoming a dominant player with the ability to compete neck-and-neck with global players. With the conducive factors outlined above coming together like never before, the confidence of entrepreneurs and investors in the space, the vast digitally skilled talent pool, and the fundamental shift in behaviour that Covid and ensuing disruptions have wrought will redefine India’s position as a global leader in SaaS.The writer is a managing partner at Zinnov, heading its emerging technologies practice