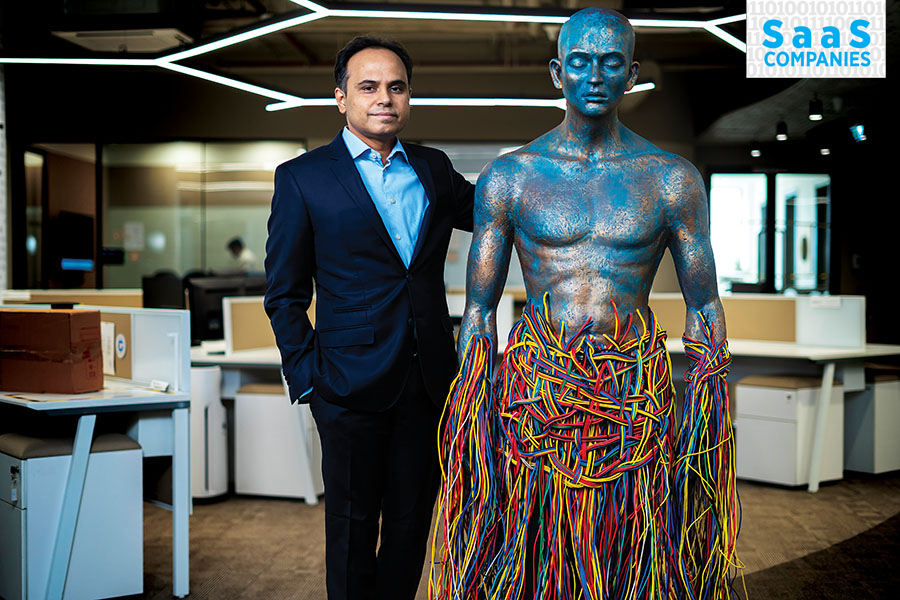 The American musical Chicago was about to start. The theatre was a sea of brightly dressed and disciplined people. There were five Indians, though, on the edge of their seats, all in a celebratory mood, humming with excitement. Six years after starting Fractal in Mumbai, the co-founders—Srikanth Velamakanni, Pranay Agrawal, Nirmal Palaparthi, Pradeep Suryanarayan and Ramakrishna Reddy—had picked a chief executive officer from among them.

The trigger to select the ‘first among the equals’ came from Gulu Mirchandani, founder chairman of Onida Group, and his son Sasha Mirchandani, who had invested in artificial intelligence (AI) and analytics company Fractal as angels in 2001. By 2006, Fractal had grown in size—$2.6 million in revenue, a head count of 60, and global offices in New York and Singapore, and there was a pressing need to have a CEO. ‘Can you guys elect one to scale the company?’ was the message from the angels.
The friends huddled in London—the venue for the elcetion. While Velamakanni and Agrawal came in from New York, Palaparthi and Suryanarayan took a flight from Singapore, and Reddy flew in from India. The election was cordial, and the choice was unanimous. “Everybody was happy, we celebrated and went to watch Chicago,” recalls Velamakanni, who was the new CEO. “For so long, all of us had been equals, but today I was the boss.” It felt weird. “It was not easy, but I tried my best,” he adds. For the next six months, there was perfect order.
Then the descent into disorder began. Fractal’s problem, though, was internal. Differences among the co-founders reached a tipping point, and two of them openly voiced their dissent against the CEO’s working style. The acrimonious row couldn’t be sorted, and there was only one way out: Either the co-founders go back to the old way of functioning, or the company was staring at the imminent possibility of getting vertically split.
Velamakanni and Agrawal conveyed their stand to the investors. “If the company splits,” the duo stressed, “there won’t be two companies. You will get only one dead company.” Eventually, the split did not happen, and Velamakanni continued as CEO.

The crisis, though, kept simmering, and the situation turned chaotic in June 2007.
Velamakanni was sitting in the Bengaluru office of K Ganesh, founder of offshore analytics service firm Marketics Technologies, which was acquired by Nasdaq-listed BPO company WNS in early 2007. “I went to get some wisdom on how to build a company,” he recalls. Just a few minutes into his meeting with the serial entrepreneur, who was now busy with edtech venture TutorVista, Velamakanni glanced at his BlackBerry. There were three emails with a common subject line: Resignation. “I was taken aback,” he recounts. After a few minutes, two more emails popped up. Two more of the staff had quit. “Something is going on in my company and I have to leave,” exclaimed Velamakanni, who apologised, abruptly ended the meeting and rushed back to Mumbai.

By the time he reached the head office, there were over a dozen resignations. All of them had sided with the warring co-founders and were set to join a rival company. The news spread like wildfire. What also fanned out at an incredible pace was a damaging rumour: Fractal bandh ho raha hai (Fractal is closing down). “It was like somebody had pulled a rug out from under our feet,” recalls Velamakanni, who was stunned and furious. The next one year was spent in legal battles. “It was the worst year of my life,” he rues. Unfortunately, the worst was yet to come. The global financial crisis of 2008 added to the woes of the fratricidal company which was gasping for breath.
Fast forward to April 2022. Fractal—a mathematical term derived from the Latin word ‘fractus’ which means broken or fractured—has managed to live, grow and thrive. Though it did get fractured over the two decades of its journey—one co-founder left in a year, two exited in 2007 and one more left in 2011—it didn’t break. 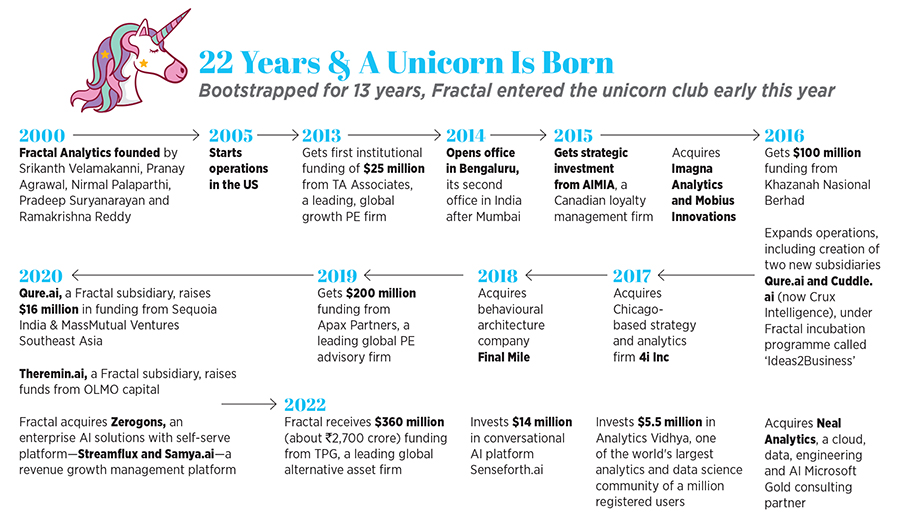 Now run by Velamakanni and Agrawal, Fractal is an over Rs 1,000-crore company, and entered the unicorn club in January when it raised $360 million (about Rs 2,700 crore) in funding from TPG, a leading global alternative asset firm. The unaudited operating revenue for FY22 is at Rs 1,295 crore as against Rs 892.1 crore in FY21. The company, claims Velamakanni, has always been profitable and remained bootstrapped for the first 13 years. The maiden institutional investment happened in 2013 when global growth private equity (PE) firm TA Associates pumped in $25 million. “We are now clocking a revenue run rate of Rs 2,036 crore,” he adds.
What is equally fascinating about Fractal is its structure. While the parent company—Fractal—has been growing steadily, its subsidiaries—a bunch of startups it has incubated and invested in—have opened up more revenue streams for the group by offering a diverse set of services.

Take, for instance, Qure.ai, which assists radiologists in making better diagnostic decisions. Then there is Crux Intelligence, which helps CEOs and senior executives in making better tactical and strategic decisions. Theremin.ai helps improve investment decisions for companies and Eugenie.ai finds anomalies in high-velocity data. There are more engines.
Samya.ai drives next-generation enterprise revenue-growth management; Senseforth.ai automates customer interactions at scale to grow top line and bottom line, and Analytics Vidhya is one of the largest analytics and data science community offering industry-focussed training programmes. “We will create many more unicorns within Fractal,” says Velamakanni, claiming that Qure.ai, which raised $16 million in funding from Sequoia India and MassMutual Ventures Southeast Asia in 2020, will soon become a unicorn.
The backers are excited with the growth trajectory. What they find most impressive is the resilience and focus of Velamakanni and Agrawal. “They have been incredibly determined,” says Sasha Mirchandani, managing director and founder of Kae Capital. They could have left the company and got some awesome jobs, but they truly believed in what they were building. “They focussed on building something amazing. The game has not even started for them,” he says, alluding to the massive headroom for growth and opportunity that awaits the AI and analytics major in a post-pandemic world. “They can become the next Infosys, Wipro or TCS. There is no limit.”
For others, the leadership position of Fractal gives it a massive edge. In the growing market for data and analytics services, Fractal continues to stand out as one of the most well-established, differentiated providers and a clear leader in AI and advanced analytics, contends Puneet Bhatia, co-managing partner of TPG Capital Asia.
The quality of Fractal’s offering enabled them to build a deep and loyal client base, made up of some of the world’s largest and most respected companies such as Google.
Fractal’s journey, though, has been dotted with its fair share of mistakes, and learnings.
Velamakanni starts with himself. “I feel I’ve always been the constraining factor for Fractal’s growth,” he says in a brutal self-assessment. “Every time I have managed to grow, I’ve been able to lead the company better,” he underlines, adding that his personal growth has been a precursor to organisational growth.

Back in 2007 and 2008, Velamakanni was in introspective mode. The context was his lingering feud with two of the co-founders. “I went on a three-day retreat and tried to reflect on the problem,” he recalls. Till then, he underlines, the sparring co-founders were the bad guys in his book. “I was the good guy,” he says. The reality, though, was not in black and white. “I started realising that there might be some truth to their story as well,” he recounts. The trigger points for a different, and balanced, perspective were simple. The co-founders, he reasoned, elected him as CEO, which means they trusted him. “Maybe my ego or behaviour was responsible,” he thought. After all, Velamakanni did behave like a CEO and not one of the equal co-founders.
Quick action followed the instant realisation. He called up his co-founders and apologised.
“There was stunned silence from the other side,” he recalls. Velamakanni was not only apologetic but was also ready to move on. “We were an arrogant company because I was an arrogant guy,” he says. A month later, the co-founders smoked the peace pipe—the two co-founders who dissented amicably sold their stake and exited. Nine years after inception, Fractal was making a new start in 2009. “We were almost starting again from scratch. That was the intermission of the Fractal story,” he says. The monumental learning was to focus on values, humility and culture.

The result was phenomenal. Fractal entered into a high-growth trajectory. Velamakanni and his team developed a ’10-20-30’ strategy. He explains. The clients Fractal decided to serve were to have one of the three attributes: Either be at least $10 billion in revenue, or $20 billion in market cap or have 30 million consumers. “We sharply defined who to serve and who not to serve,” he says, explaining the reason behind the move. One can spend, he underlines, the same amount of time trying to sell analytics to a tiny company or to Google. “I might as well spend time on Google because if you succeed, the prize is very large,” he says.
Another learning is playing the long game. “The magic of compounding takes care when you play a really long game,” he says. But to an entrepreneur in the business of AI and analytics, what is it that matters the most? Is it intelligence or artificial intelligence?
Velamakanni reckons it’s neither. “Emotional intelligence and empathy are the two most important attributes,” he says. While smartness and intelligence will lead an individual to a particular stage, what really changes the game is emotional intelligence.

Tweets by @forbesindia
In Ukraine, gruesome injuries and not enough doctors to treat them
Women footballers to now get paid as much as men in the US