Ad filmmaker-turned director Ashwiny Iyer Tiwari has delivered hits like Nil Battey Sannata and Panga with her incisive storytelling, and hopes to represent India at the Oscars 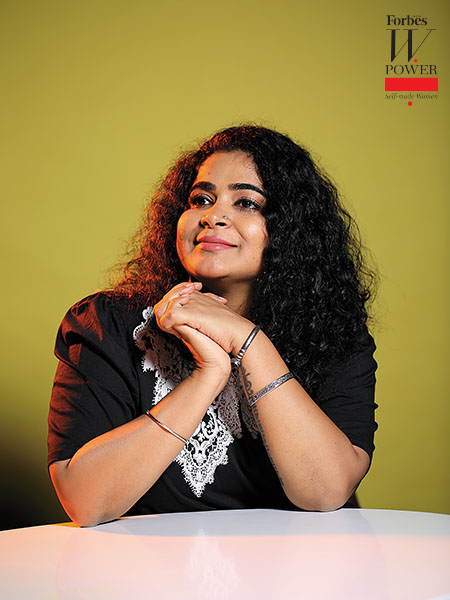 Ashwiny Iyer Tiwari sees some of her photos on the computer screen next to her and suggests that the gel paper placed on the lights be changed from blue to red. She feels the blue tint is lost in her all-black attire. Red, she insists, would provide the desired effect. Not surprisingly, her assessment proves to be correct. It’s evident the 40-year-old has an innate understanding of lights, camera, angles and colours. After all, she spent over a decade in the advertising industry, directing over 300 commercials, before earning her stripes as a filmmaker. Her three feature films—Nil Battey Sannata (2016), Bareilly Ki Barfi (2017) and Panga (2020)—have all earned critical acclaim.

Relieved that her stint in front of the camera is over, Iyer Tiwari looks forward to the prospect of eating at a local joint in Mumbai’s corporate hub of Lower Parel after the shoot with Forbes India on a cold February morning. “It’s exciting,” she says about directing films, as she alternates between biting into misal pav and sipping hot tea at the noisy eatery teeming with people. It was an ambition she had secretly harboured since she passed out as a gold medallist from Mumbai’s Sophia College where she did a four-year course in applied arts.

A campus placement got her an internship with Leo Burnett (formerly Chaitra Advertising) as a visualiser. She returned to the company for over a decade-long second stint later; when she left in 2013 as executive creative director, she had worked on commercials for shows such as Kaun Banega Crorepati, Indian Idol and Bigg Boss, as well as a slew of brands, from Whisper and Tide to Fiat and Tata Indicom, among others.

The transition from a cushy corporate job to Bollywood, where she was a rank outsider, took many by surprise. “But I wanted to tell stories. I had visualised stories that can become bigger in terms of many people seeing it and making a mark in society. I knew stories will always travel far,” says Iyer Tiwari, winner of the Cannes Lions gold in advertising. It helped that her bosses told her she could return if her directorial journey did not take off. But she hasn’t had to look back since.

Iyer Tiwari debuted as a director with Nil Battey Sannata which spoke about the need for educating girls. It won such rave reviews that she remade the film in Malayalam the following year. “Of course I was nervous on the first day of shoot,” recalls the filmmaker, who was happy to see her name on the big screen later. “But the bigger high is knowing that the audience is watching my film. People may not know me, but they know me through my work. That is a great feeling.”

Directing commercials and helming a film are as different as batting in a T20 cricket game and a Test match. Not only is the canvas bigger in the latter but it also entails more than just doling out instructions from behind the monitor. “You have to think differently. A lot of technical knowledge is required,” says Iyer Tiwari. Besides, people management—something that she claims she’s good at—is key. “Co-working and coexistence have always been a part of me,” she says.

Actor Jassie Gill, who starred in Panga, agrees. “Ashwiny’s biggest strength is that she grows creatively with the actor, trusts our talent and her craft,” says Gill.

The director’s second Hindi film, a rom-com titled Bareilly Ki Barfi, starring Ayushmann Khurrana, Rajkummar Rao and Kriti Sanon, was also appreciated. And her latest, Panga, featuring Kangana Ranaut with Gill, was lauded as a poignant tribute to mothers and an acknowledgement of their aspirations and sacrifices. All her movies have had strong women characters, but Iyer Tiwari says every film comes with its own challenge. “It is important to get out of your comfort zone with each film, otherwise you’ll be doing the same thing,” she says.

The filmmaker likes to have the script locked before shooting commences. But that does not mean she is averse to creative inputs. “Direction is a job where you prep, but what happens on set is also magical,” says Iyer Tiwari. “It’s wonderful when you see a trail of work that you have done for two years coming alive on screen. The vision is yours, but a film is an accumulation of a jigsaw puzzle. And the only person on set who knows the whole jigsaw is the director. When it comes out better than you had imagined, you feel ‘wow’.”

Gill believes the filmmaker’s work ethic and clear vision make working with her a smooth affair. “On sets, she is dedicated and immersed in her craft. She puts in a lot of hard work behind every scene, and makes actors feel comfortable,” he says.

Iyer Tiwari is now working on a film on Infosys co-founder NR Narayana Murthy and his author-philanthropist-wife Sudha. That apart, she is producing The Siachen Warrriors, and producing and directing a film for Ekta Kapoor. “The idea [behind production] is to build an ecosystem like Infosys where you grow and other youngsters also grow along with you,” she says.

“ I had visualised stories that can become much bigger in terms of people seeing it and making a mark in society.”

Despite having her hands full, she reads a lot and runs an Instagram page #NoMakeUpBooksByAIT. Gardening also gives her immense joy. An aspiring painter since childhood, Iyer Tiwari wants to do an abstract painting course in London. And, some day, go to Switzerland to study the [Carl] Jung theory on life and death. “I like to study and learn. If not a filmmaker, I would have been a psychologist or an anthropologist,” says Iyer Tiwari, who is married to Nitesh Tiwari, her colleague at Leo Burnett and director of hits such as Dangal (2016) and Chhichhore (2019).

Movies, however, will remain close to her heart. And that’s where she hopes the learning never stops. “Whenever I direct, I feel it’s my first film. I have to work that much harder to meet my own expectations. I want to do a lot more, in terms of my storytelling… making films which, maybe one day, represent our country at the Oscars. I am still not there. I need to do far more,” she says.