After a successful first career in banking, Vedika Bhandarkar is working to bring clean water and sanitation to those living at the base of the economic pyramid 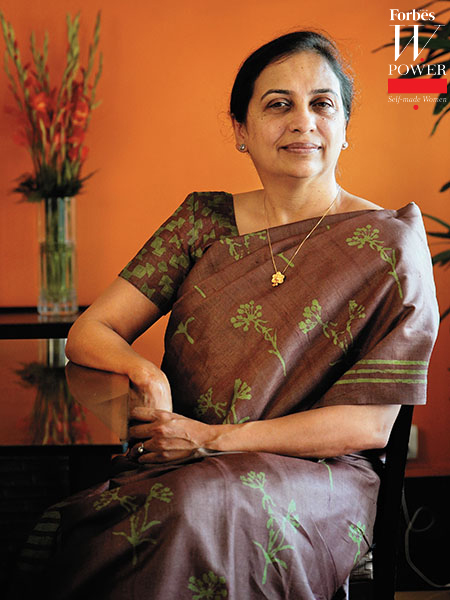 “I didn’t know I wanted to work in the social sector,” confesses Vedika Bhandarkar. “I just knew I was done with banking.”

She was a star banker, taking over as head of investment banking at JP Morgan India at 34. She worked there for 12 years before moving on to Credit Suisse India where she was vice chairman and managing director. At the Swiss bank too, she headed the investment banking function, taking it from “around 16” in the league tables when she joined in 2010 to the top five by the time she resigned in 2015.

Dressed in a casual tee, her short hair pulled back in ponytail, Bhandarkar has a humble ease about her. It’s something her close friends corroborate. “I’ve known her since her Credit Suisse days,” says Deval Sanghavi, co-founder of non-profit Dasra, “she’s humble and authentic.”

At the time, Bhandarkar supported the empowerment of adolescent girls in Bihar and Jharkhand through Dasra’s giving circle—where individuals pool their money and help solve a social problem. “In our first meeting itself, it was abundantly clear that Vedika was not only a philanthropist but also someone who cared deeply about supporting marginalised communities with funds, expertise and time,” says Sanghavi.

So when Bhandarkar quit banking to lead Water.org’s work in India, a global non-profit working to bring clean water and sanitation to all, “it came as no surprise”, he says.

The switch wasn’t immediate though. Bhandarkar first volunteered with the Mumbai-based NGO Jai Vakeel Foundation that supports individuals with intellectual disabilities to raise money. But from once every week, she soon started visiting more frequently, rolling up her sleeves to help with scaling, putting in processes and professionalising the setup.

When Water.org approached her to lead their team in India a few months later in early-2016, Bhandarkar began studying the water crisis. Home toilets are often taken for granted, but only 27 percent of the world’s population has domestic sanitation, estimates the World Health Organization. In India, 650 million, or about half the population, lacks access to clean water and sanitation (Wash).

Bhandarkar learnt that a lack of safe water and sanitation affects women and girls disproportionally. Because they’re tasked with fetching water for their families from the nearest source, often spending up to five hours a day doing so, and they have to wait till nightfall to relieve themselves. With access to water and sanitation, women and girls can spend their time productively by pursuing studies or economic activities. “Issues affecting women and girls have always been close to my heart so this struck a chord,” says Bhandarkar.

As did the “linkage” between finance and philanthropy that Water.org pioneered with its WaterCredit initiative. When the Missouri-headquartered non-profit founded by Gary White and actor Matt Damon set up operations in India in 2005, it began by doling out grants to help households gain access to safe water and decent sanitation. A few years into their work, they realised that a solution more sustainable than charity was needed, explains Bhandarkar. The co-founders saw an opportunity in India’s mature microfinance landscape. Water.org convinced MFIs who were already extending “income generating” loans to those living in poverty to say, buy cattle or a sowing machine, to instead provide “income enabling” loans. These could be used to build household toilets or install water connections. “Research shows that women spend a third of the time they save [by not fetching water or looking for vacant spaces to defecate] on some form of economic activity,” says Bhandarkar.

After testing this market-based model in India, Water.org replicated it in other countries. Today 27.9 million people have benefited from WaterCredit’s interventions; of which 12.3 million are from India. “Cumulatively, the financial institution partners of Water.org have lent $2.2 billion to reach these 27.9 million people, while cumulative grants we have made for that initial risk total $33 million. In effect, we’ve used $33 million to crowd in commercial finance of $2.2 billion. That’s a leverage of about 70x. It’s about stretching every dollar of philanthropic capital,” says Bhandarkar.

In India, the launch of the government’s Swachh Bharat Mission in 2014 provided “huge tailwinds” to Water.org’s work, says Bhandarkar, who joined as managing director, India, in January 2016.

Today, average loan sizes vary from about ₹9,000 for a water connection to about ₹14,000 for building a toilet; effective interest rates are 10 percent to 23 percent and interestingly, loan repayment rates are more than 99 percent. “As a banker, I serviced clients earning millions and billions. Here I’m helping customers living at the base of the economic pyramid [earning between $1.9 and $6 a day] gain access to affordable finance. They’re literally two ends of the spectrum,” she says.

“ The $80 bln gap per year in financing [for access to water and sanitation] cannot be closed by one stakeholder alone.”

Besides building the team, scaling operations and bringing in more MFI and banking partners into the fold, Bhandarkar’s work includes coaxing policymakers to make water and sanitation a priority. “As an example, every year, the RBI occasionally reviews its policy for lending to the priority sector,” says Bhandarkar. [Banks are mandated to lend 40 percent of their net bank credit to priority areas such as agriculture, affordable housing and education.] “Working with several other institutions, we were able to include Wash in that. It’s a significant change that helps bring more money into the sector.”

The World Bank estimates that for universal access to safe water and sanitation $115 billion will be needed per year from 2016 to 2030. The amount of money currently spent in the sector is roughly a third of that, says Bhadarkar. “There’s a $80 billion gap per year in financing which cannot be closed by one stakeholder alone. Everyone needs to come together—the government, private sector, civil society and the financial sector—to solve for this.”

Bhandarkar recalls a time she went on a field visit to a village in Karnataka. “A mother told me how her 11-year-old daughter, who had gone to a relative’s place for her education, refused to return over the vacation because there was no toilet at home and she had got accustomed to one. The mother took a loan, built a toilet and brought her daughter home. Just ₹10,000 can make such a big difference…” She halts; her eyes fill with emotion. “The social sector teaches you humility.”