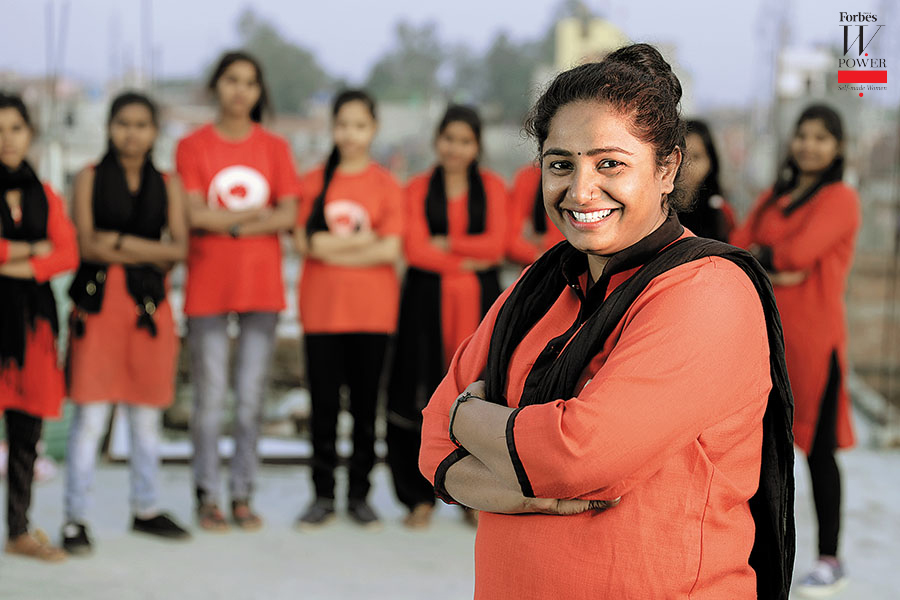 Usha Vishwakarma knows it is an uphill task for survivors of harassment or assault to regain their self-confidence and bring their life back to normalcy. The founder of Red Brigade Lucknow, a survivor of attempted rape herself, has devised indigenous techniques to help women defend themselves when under attack. Her non-profit has trained over 1.57 lakh girls in India since 2011, and the activist is on a mission to reach out to as many girls as she can in the coming years. The 33-year-old believes that while a lot of women choose not to report harassment or assault for various reasons, they need to be able to defend themselves if such incidents occur. She herself had chosen to remain silent fearing that her family would impose restrictions on her.

At the time of her assault, Vishwakarma, then 18, had just completed her intermediate education from a government school in Madiyaon district in Lucknow, and was working with a non-profit to teach children in the nearby slum areas. The person who attacked her was a colleague. “He forcefully grabbed me, held me down and tried to rip off my clothes. I was in shock and was shivering. But I managed to kick him, slap him twice and escape. I used to be a strong woman but this incident broke my self-confidence,” she says. She had always grappled with her choice of remaining silent, so when an 11-year-old girl who she taught in the slums told her that she had been molested by her uncle, she was triggered to take action. She realised education meant nothing if one’s personal safety was not guaranteed, and decided to empower girls through self-defence and counselling. Data from the National Crime Records Bureau (NCRB) indicates that 32,559 rape cases were reported in India in 2017, and in 93.1 percent cases the accused were known to the victims. In order to embolden young girls and women physically and mentally, Vishwakarma organised awareness campaigns, street plays and workshops in schools, colleges and other public spaces. She works with girls over 12 and also helps women with legal assistance if they are ready to file a case. She initially worked with 15 other girls, most of whom were survivors. Their group did not have an official identity back then, and the girls wore red and black attire, the colours representing danger and protest respectively. “Men used to make derogatory remarks whenever we performed in public. One day in April 2011, a boy called out, ‘Powerful red brigade ja rahi hai’ [a powerful red brigade is on its way],” Vishwakarma recollects. “My girls and I liked it so much that we decided to name our group Red Brigade. Thanks to their catcalling, we got a name.” The non-profit is run purely with the donations they receive and has about 100 members now. The group initially took to conventional martial arts training, only to realise they might be largely ineffective when someone is under attack. “When you are under attack, there is no time to use conventional martial arts moves like elbowing, punching or kicking, as everything happens in just a few seconds,” Vishwakarma explains. With the help of inputs from survivors, the Red Brigade Lucknow went on to develop 15-20 of their own techniques. “We have named this Nishastrakala (unarmed combat),” she says. These techniques, designed keeping various possible situations of sexual harassment or assault in mind, can be executed in less than 20 seconds. For example, in the event that a girl is grabbed from behind, she is taught to use her hands to push the perpetrator from the hip, turn around, kick him and scratch his face. The efficiency of the techniques is routinely tested with the help of men in the group, and Vishwakarma keeps developing more techniques as and when new cases come to light. She also encourages girls to think on their feet. Kavita Bharti (22) has been a member of the group for the last four years. As a teenager, she was molested by a member of her own family and was asked by her mother to keep quiet about it. Bharti was a state-level gold medalist in karate in Uttar Pradesh, and realised that just the martial art form could not equip her to fight her perpetrator. “I completely lacked confidence until I joined Red Brigade Lucknow and started learning to get back on my feet from Usha didi. My family continues to oppose my decision to work with this group because there are no monetary benefits,” says Bharti. Vishwakarma’s own family and friends were opposed to her activism. “My neighbours used to mock my mother saying that her daughter has gone out of control and her actions will impact the family negatively,” she says. The opposition continued for about two years, until one day in 2013, the family of a rape survivor that Vishwakarma had helped recover from trauma landed up at her doorstep. They thanked her parents profusely, saying that the daughter of their house had taught theirs to fight back. After that, her family started supporting her. “Usha is a lioness and a go-getter,” says radio jockey Rakhi Kishore from the FM Rainbow channel of the All India Radio. She had interviewed Vishwakarma for Doordarshan in 2014. “The Red Brigade’s Nishastrakala is very practical. Two years ago, the group decided to teach these techniques to 100 schools in 100 days. I was part of some of these training sessions and was thrilled to learn that you can successfully prevent an assault using these simple self-defence techniques,” she explains. Vishwakarma believes if women want to realise the power within them, they must go back to history and take inspiration from the women who fought to empower themselves and each other. “We must be aware of our collective past and take pride in being a woman because this world would not exist without us.”