As director of international originals at Netflix India, Monika Shergill has charted a bold and adventurous destiny 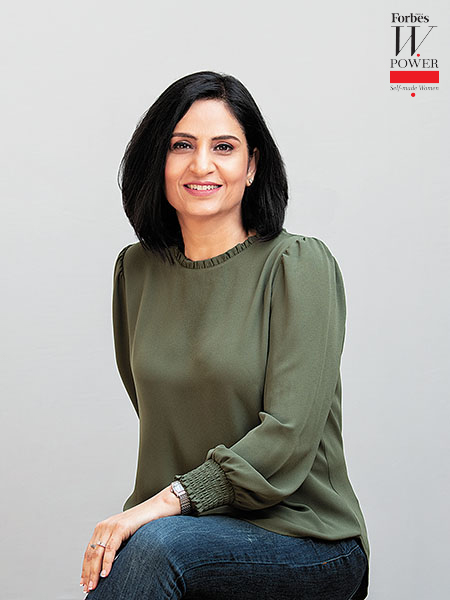 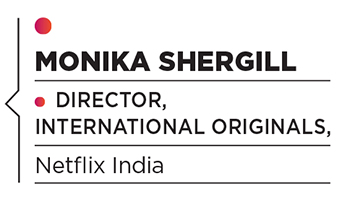 A small garrison town seeped in history, a black and white television set that telecast every programme that national broadcaster Doordarshan had to offer in the 80s, and an international news show The World This Week that gave a glimpse into the outside world… Monika Shergill could not have asked for a more content childhood. “As a kid, I used to feel excited watching the show,” says Shergill, who hails from Meerut—the place that gave birth to the revolt of 1857.

She was never a rebel, but the infectious courage of her hometown did rub off on the young girl who decided to follow her instincts, and dreams, early in life. “I always wanted to tell stories,” she says.

Stories, as destiny would have it, followed Shergill. After finishing college from Delhi University, she did a course in journalism and started her career as a correspondent and producer, making documentaries, and environment and travel series in the mid-90s. “I started reporting for a Green Oscar-winning environment series called Living On The Edge,” she says.

Be it risking her life while reporting the rampant illegal coal mining in Dhanbad in then-Bihar, going deep inside the dense forest of Mandla in Madhya Pradesh, capturing how thousands of sal trees were infested by beetles, or exposing illegal chemical factories in Vapi, Gujarat, Shergill’s bag was full of stories. That was then.

Today, seven months into her new role as director, international originals, and head of the series team for Netflix in India, Shergill is sharply focussed on what she had been doing over the last decade or so: Sniffing extraordinary stories and her curious eyes spotting rare tales for the American streaming giant. “My journey has been pretty adventurous,” she says, adding that her parents have had a lion’s share in her success.

“My parents,” she adds, “just believed in my dreams. They let me do what I wanted to do and loved to do.”

It helped that Shergill pursued a field that welcomed her without any gender bias. “This is one industry (journalism) that has welcomed women in a big way, and made me feel comfortable,” she says. What has subtly changed over the last few years, however, is the nature and dynamics of the industry. “The power may have shifted,” she says. More women, she adds, are in influential positions in India, a paradigm shift in the last decade.

Shergill, though, doesn’t see a sharp disconnect in terms of the dominance narrative. The answer, she underscores, is somewhere in the middle. She says if one looks at the traditional corporate structures, men still dominate the boardroom… the ratio is skewed. Even the creative side of the business has more men in top positions. But a welcome change has been sweeping through over the last few years, especially in new-age companies.

At Netflix, she claims, there are more women executives in senior positions than in many other companies. The culture of ease and excitement about a talented woman and her rightful place keep her super-charged at Netflix.

But why are organisations like Netflix an aberration rather than a norm in India? A mix of insecurity and lack of trust in the capabilities of women, says Shergill. “Why do you think there are fewer women entrepreneurs in India?” she asks. The answer, she continues, is not because women don’t have ideas or can’t run businesses. “It is because even now there are very few people, including venture capitalists, who will back an idea by a woman entrepreneur,” she says. The percentage of people backing a woman entrepreneur and ready to fund their business ideas is less, she rues.

Just as her approach in life, Shergill has stayed away from the conventional definition of success. “There are different shades of success,” she says. Achieving a higher designation or clocking high growth numbers can’t define success. “This is such a narrow definition which demotivates 90 percent of the people from doing what their heart desires,” she says.

One should not try to live up to somebody else’s definition of success. Everybody has an individual definition, she believes, adding that her biggest achievement at Netflix is working with a great team and ‘putting together a fantastic bunch of ideas’ in record time.

Being Shergill, reckon film critic and trade analyst Joginder Tuteja, is not easy. “It is truly remarkable the way she has been working at Netflix,” he says.

The manner in which the digital platform has invaded the entertainment landscape is astonishing. Shergill, he says, not only brings innovative ideas and creativity to the table, but she is also somebody who understands what the Indian audience wants. “It’s a great opportunity for Shergill, but the challenge is equally daunting,” explains Tuteja, adding that rival streaming platforms such as Amazon Prime Video and Hotstar have also become aggressive in grabbing mindshare of the viewers.

Shergill is not daunted by challenges or the fear of failure. “It’s absolutely ridiculous and idiotic to think that we will not fail,” she says, adding that a graph can never be a flat line.

“The only time there is a flat line is when we die.” Ask her one piece of advice that she would like to give young girls, and Shergill sums it up in four words: Believe in your story. “Every girl must believe that she can be whatever she wants to be,” she says. Chase dreams and write your own story, she signs off.