The event was the mirror image of a "Howdy, Modi!" rally the two men held in Houston in September. It made vivid an image the leaders are jointly cultivating as larger-than-life, unapologetically brash figures leading their countries to bright new futures—even as critics call them mutual enablers in parallel assaults on democratic and religious freedoms 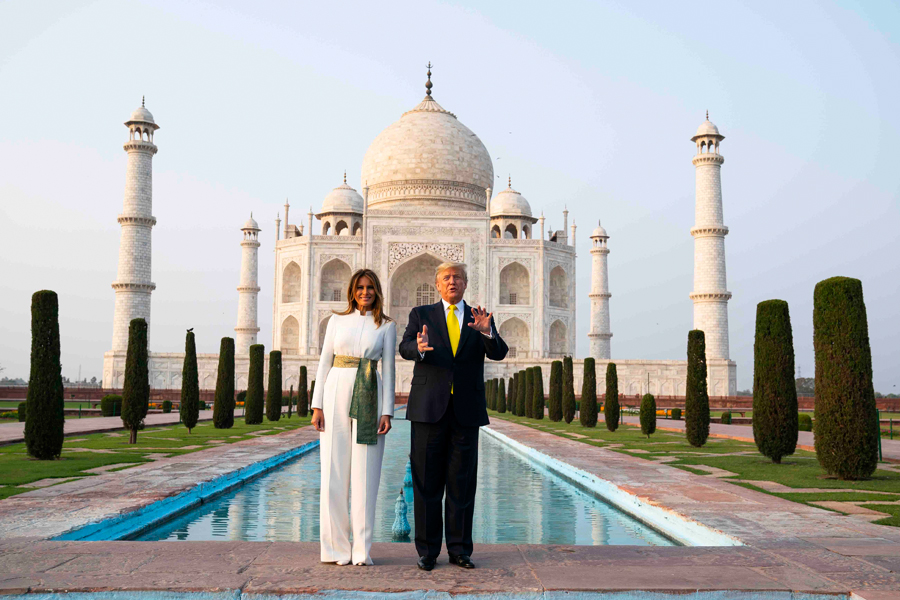 AHMEDABAD, India — President Donald Trump began a two-day visit to India by joining Prime Minister Narendra Modi for a campaign-style rally in a 110,000-seat cricket stadium that illustrated the populist bond between the two men and impressed a president who revels in spectacle.

The “Namaste Trump” rally, a daylong affair featuring popular singers, dancers and pounding music, took place under a blazing sun in the city’s Motera Stadium, which India calls the largest of its kind in the world. It was an unabashed homage to Trump, whose name and image appeared in dozens of banners and billboards throughout the stadium.

Trump looked out with satisfaction at the grand display and said it had made a lasting impression on him.

”We will always remember this remarkable hospitality. We will remember it forever,” Trump said to loud cheers, as his wife, Melania, sat nearby. “From this day onward, India will always hold a special place in our hearts.”

But even as he name-checked famous cricket players and Bollywood stars, Trump betrayed unfamiliarity with the country — and even his immediate location — when he stumbled over several pronunciations, including those of Ahmedabad itself, as well as Gujarat, the state it anchors and Modi’s political home base.

And although Trump said with satisfaction that 125,000 people had turned out to see him, more than one third of the crowd appeared to leave before the end of his nearly 30-minute remarks, and another third was gone by the time Modi spoke after him.

The event was the mirror image of a “Howdy, Modi!” rally the two men held at a football stadium in Houston in September and catered to Trump’s taste for a giant crowd. It also made vivid an image the leaders are jointly cultivating as larger-than-life, unapologetically brash figures leading their countries to bright new futures — even as critics call them mutual enablers in parallel assaults on democratic and religious freedoms.

“Two dynamic personalities, one momentous occasion,” declared one billboard in Ahmedabad, highlighting a personal dynamic that, for now, overshadows more substantive hang-ups in the U.S.-India relationship. Those included Trump’s efforts to strike a peace agreement with the Taliban and slow progress toward a trade deal.

Trump said that he and Modi would eventually be making “very, very major” trade deals but added that they are in the “early stages of discussion.” Modi was “a very tough negotiator,” he joked.

But that was about as critical as Trump got in remarks that hailed Modi for his “landslide” 2019 reelection, which Trump noted was the largest democratic election on Earth. Making no mention of a growing backlash against what critics call Modi’s anti-Muslim Hindu nationalism, Trump praised India for its unity and echoed the Indian leader’s own stump speeches by noting anti-poverty efforts that have provided more electricity, cooking gas and toilets to rural Indians.

It was further evidence that Trump and Modi have developed a personal bond, or at least a political partnership, one Modi has skilfully created with the glue of flattery. Before departing from Washington on Sunday, Trump told reporters that his appearance here would be “the biggest event they’ve ever had in India. That’s what the prime minister told me.” (The rally was likely not even the biggest Indian turnout for a U.S. president: Dwight D. Eisenhower drew a crowd of 1 million during a 1959 visit to New Delhi, according to an Associated Press report at the time.)

Onstage, the two men hugged repeatedly, and Modi lavished his guest with praise.

“President Trump thinks big, and the world knows what he has done to realize the American dream,” Modi said to the cheering crowd.

Although Ahmedabad did not deliver the 10 million well-wishers that Trump has also said Modi promised to turn out — the entire city’s population is less than 6 million, and television images suggested tens of thousands, not millions in the streets — the city feted him with costumed musicians and dancers, and even a marching band on camels.

Motera Stadium — formally known as Sardar Patel Stadium and still partly under construction — was full at the outset of Trump’s remarks, with tens of thousands sitting for hours in temperatures well above 80 degrees. Some Indians wore Modi masks and waved American flags while they danced to the popular Indian musicians who warmed up the crowd.

Trump departed from the event for Agra and a sunset tour of the Taj Mahal. From there he heads to New Delhi, where he will meet with Modi before attending a state banquet.

Trump drew some of the day’s loudest cheers when he mentioned India’s rival and neighbor, Pakistan, saying that he was working with that country “to crack down on the terrorist organizations that operate” along its border with India, and which New Delhi sees as a mortal threat.

“Every nation has the right to secure and controlled borders. The United States and India are committed to working together to stop terrorists and to fight their ideology,” Trump said.

Trump, who tweeted good wishes to India in Hindi before and after his arrival, was joined on his flight there by his wife Melania, his daughter Ivanka and her husband, Jared Kushner. Before arriving at the stadium, Trump removed his shoes and donned a traditional scarf for a visit to an ashram where the former Indian leader Mohandas K. Gandhi once lived.