Automation has always been a big part of agriculture, but lately, smaller, more dexterous robots have emerged in droves, underscoring the need for better data collection and analysis in farming 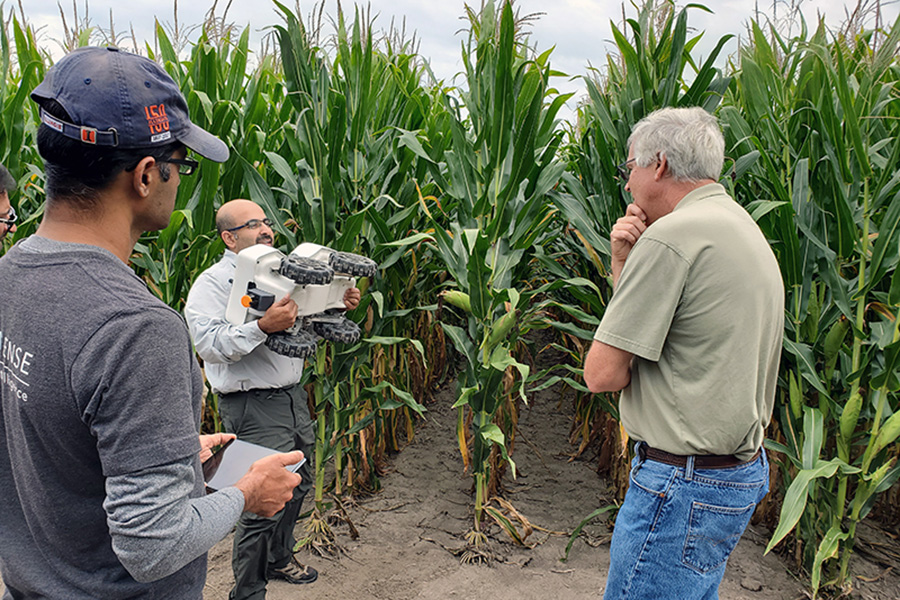 Girish Chowdhary, holding a TerraSentia robot, and Chinmay Soman, left, with Tim Smith at one of Smith’s research fields in Farmer City, Ill. The robot is designed to generate the most detailed portrait possible of a field, from the size and health of the plants, to the number and quality of ears each corn plant will produce by the end of the season, so that agronomists can breed even better crops in the future. (Institute for Genomic Biology/University of Illinois via The New York Times)

FARMER CITY, Ill. — In a research field off Highway 54 last autumn, corn stalks shimmered in rows 40 feet deep. Girish Chowdhary, an agricultural engineer at the University of Illinois at Urbana-Champaign, bent to place a small white robot at the edge of a row marked 103. The robot, named TerraSentia, resembled a souped up version of a lawn mower, with all-terrain wheels and a high-resolution camera on each side.

In much the same way that self-driving cars “see” their surroundings, TerraSentia navigates a field by sending out thousands of laser pulses to scan its environment. A few clicks on a tablet were all that were needed to orient the robot at the start of the row before it took off, squeaking slightly as it drove over ruts in the field.

“It’s going to measure the height of each plant,” Chowdhary said.

It would do that and more. The robot is designed to generate the most detailed portrait possible of a field, from the size and health of the plants to the number and quality of ears each corn plant will produce by the end of the season, so that agronomists can breed even better crops. In addition to plant height, TerraSentia can measure stem diameter, leaf-area index and “stand count” — the number of live grain- or fruit-producing plants — or all of those traits at once. And Chowdhary is working on adding even more traits, or phenotypes, to the list with the help of colleagues at EarthSense, a spinoff company that he created to manufacture more robots.

Traditionally, plant breeders have measured these phenotypes by hand and used them to select plants with the very best characteristics for creating hybrids. The advent of DNA sequencing has helped, enabling breeders to isolate genes for some desirable traits, but it still takes a human to assess whether the genes isolated from the previous generation actually led to improvements in the next one.

A blossoming of bots
“The idea is that robots can automate the phenotyping process and make these measurements more reliable,” Chowdhary said. In doing so, the TerraSentia and others like it can help optimize the yield of farms far beyond what humans alone have been able to accomplish.

Automation has always been a big part of agriculture, from the first seed drills to modern combine harvesters. Farm equipment is now regularly outfitted with sensors that use machine learning and robotics to identify weeds and calculate the amount of herbicide that needs to sprayed, for instance, or to learn to detect and pick strawberries.

Lately, smaller, more dexterous robots have emerged in droves. In 2014, the French company Naïo released 10 prototypes of a robot named Oz that is just 3 feet long and weighs roughly 300 pounds. It assembles phenotypes of vegetable crops even as it gobbles up weeds. EcoRobotix, based in Switzerland, makes a solar-powered robot that rapidly identifies crops and weeds; the device resembles an end table on wheels. The household appliance-maker Bosch has also tested a robot called BoniRob for analyzing soil and plants.

“All of a sudden, people are starting to realize that data collection and analysis tools developed during the ‘90s technology boom can be applied to agriculture,” said George Kantor, a senior systems scientist at Carnegie Mellon University, who is using his own research to develop tools for estimating crop yields.

The TerraSentia is among the smallest of the farmbots available today. At 12.5 inches wide and roughly the same height, the 30-pound robot fits well between rows of various crops. It also focuses on gathering data from much earlier in the agricultural pipeline: the research plots where plant breeders select the varieties that ultimately make it to market.

The data collected by the TerraSentia is changing breeding from a reactionary process into a more predictive one. Using the robot’s advanced machine-learning skills, scientists can collate the influence of hundreds, even thousands, of factors on a plant’s future traits, much like doctors utilize genetic tests to understand the likelihood of a patient developing breast cancer or Type 2 diabetes.

“Using phenotyping robots, we can identify the best-yielding plants before they even shed pollen,” said Mike Gore, a plant biologist at Cornell University. He added that doing so can potentially cut in half the time needed to breed a new cultivar — a plant variety produced by selective breeding — from roughly eight years to just four.

Sowing a niche
The demands on agriculture are rising globally. The human population is expected to climb to 9.8 billion by 2050 and 11.2 billion by 2100, according to the United Nations. To feed the world — with less land, fewer resources and a changing climate — farmers will need to augment their technological intelligence. 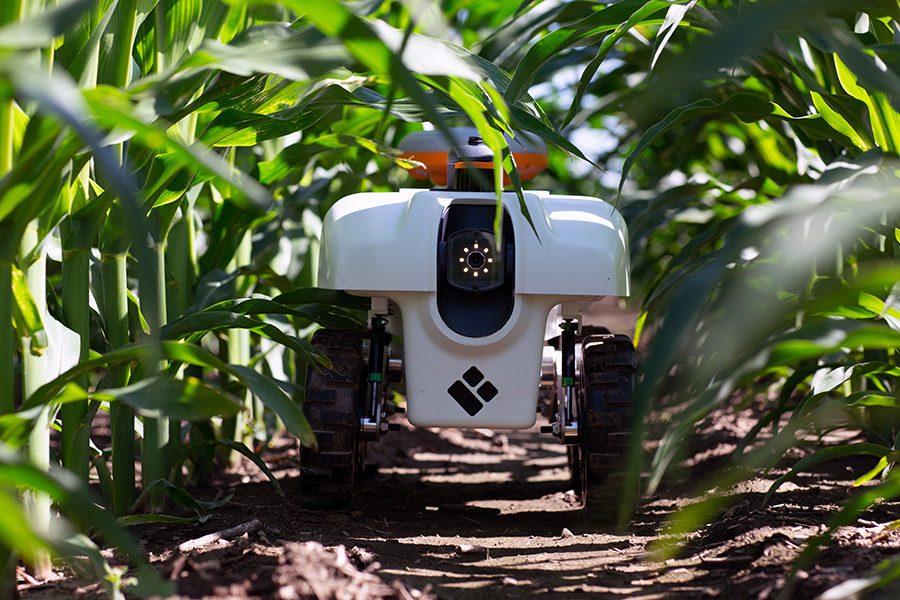 The agricultural giants are interested. Corteva, which spun off from the merger of Dow Chemical and DuPont in 2016, has been testing the TerraSentia in fields across the United States.

“There’s definitely a niche for this kind of robot,” said Neil Hausmann, who oversees research and development at Corteva. “It provides standardized, objective data that we use to make a lot of our decisions. We use it in breeding and product advancement, in deciding which product is the best, which ones to move forward and which ones will have the right characteristics for growers in different parts of the country.”

Chowdhary and his colleagues hope that partnerships with big agribusinesses and academic institutions will help subsidize the robots for smallholder farmers. “Our goal is to eventually get the cost of the robots under $1,000,” he said.

Farmers don’t need special expertise to operate the TerraSentia, either, Chowdhary said. The robot is almost fully autonomous. Growers with thousands of acres can have several units survey their crops, but a farmer in a developing country with only 5 acres could use one just as easily. The TerraSentia has already been tested in a wide variety of fields, including corn, soybean, sorghum, cotton, wheat, tomatoes, strawberries, citrus crops, apple orchards, almond farms and vineyards.

But some experts question whether such robots will ever truly be targeted to small farms or be a sufficiently affordable option. “For the kind of agriculture that smallholders tend to engage in, particularly in sub-Saharan Africa, South Asia and parts of Latin America, there are a lot of barriers to the adoption of new technologies,” said Kyle Murphy, a policy and agricultural development analyst at the Abdul Latif Jameel Poverty Action Lab at MIT. He added that robots like the TerraSentia may be more likely to help smallholder farmers indirectly by promoting the development of better or more suitable crops.

The road to improvement
Before the TerraSentia can advance crop breeding for a wide swath of farmers, it must perfect a few more skills. Occasionally, it trips over branches and debris, or its wheels get stuck in muddy soil, requiring the user to walk behind the rover and right its course as needed. “Hopefully, by next year we’ll be able to train the TerraSentia so even more users won’t have to be anywhere in the field,” Chowdhary said.

For the moment, the TerraSentia keeps a leisurely pace, less than 1 mph. This allows its cameras to capture slight changes in pixels to measure the plants’ leaf-area index and recognize signs of disease. Chowdhary and his colleagues at EarthSense are hoping that advancements in camera technology will eventually add to the robot’s speed.

The team is also building a maintenance barn, where the TerraSentia can dock after a long day. There, its battery can be swapped with a fully charged one, and its wheels and sensors can be sprayed clean. But for now, a farmer simply dumps the robot in the back of a truck, takes it home and uploads its data to the cloud for analysis.

The main office of EarthSense, in Urbana, Illinois, is full of early versions of robotic technology that didn’t quite pan out. Initial prototypes of TerraSentia lacked a proper suspension system, so the robot jumped into the air and disrupted the video streams whenever researchers set it loose in a deeply rutted field. Another design kept melting from the heat of the robot’s motors, until researchers switched plastics and added metal shielding.

Those early, cracked chassis are now stacked on a shelf, like a museum display: a reminder of the need for improvement but also of the excitement that the robot has generated.

“A lot people who tried the early prototypes still came back to us, even after having robots that essentially broke on them all the time,” Chowdhary said. “That’s how badly they needed these things.”