Amazon wants Alexa to move far beyond the living room

In a flurry of announcements Wednesday, Amazon unveiled the latest additions to the growing list of products tied to the company's Alexa voice assistant—earbuds, glasses, a ring, even a new dog collar 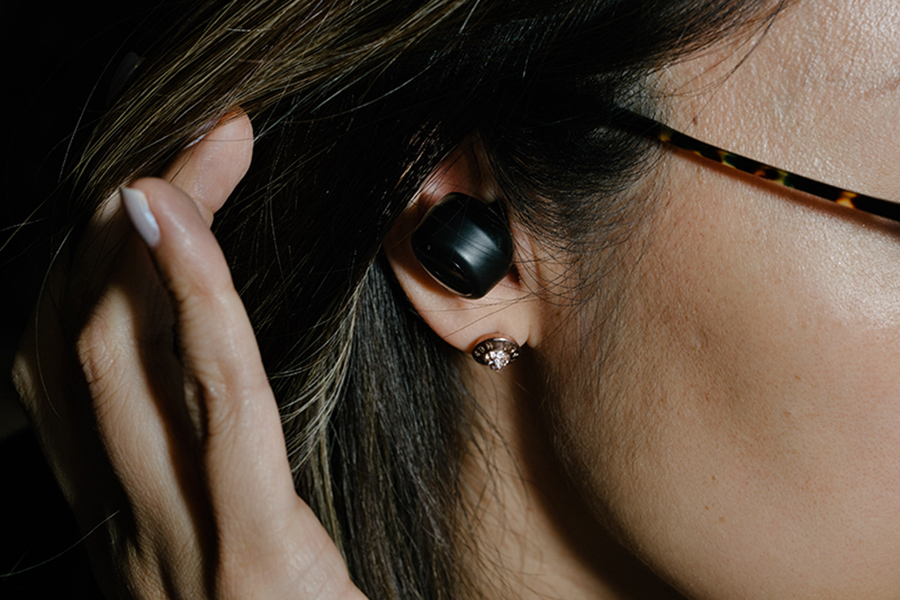 A woman tries the Echo Buds, Amazon's answer to Apple's AirPods, that can summon Alexa, at Amazon's Home Lab in Seattle, Sept. 25, 2019. In a flurry of announcements on Wednesday, Amazon unveiled the latest additions to the growing list of products tied to the company’s Alexa voice assistant. Image: Grant Hindsley/The New York Times

SEATTLE — Alexa has already made herself at home in kitchens and living rooms. Now Amazon is trying to get her in your ears. And on your face. And in your bathroom.
And maybe — someday — on your dog. In a flurry of announcements Wednesday, Amazon unveiled the latest additions to the growing list of products tied to the company’s Alexa voice assistant. The devices expand the options for places in the home where Amazon has already found success, while advancing the company’s hopes of getting Alexa to stay with users all day, everywhere they go. The new products with Alexa built in include earbuds, glasses, a ring, and a tiny device for spaces like bathrooms and garages. A new dog collar tracks a pet so an owner can find its location with a smartphone. To help keep devices connected to the internet, Amazon also unveiled Amazon Sidewalk, a low-bandwidth network that could connect smart devices across a city by piggybacking off neighbors’ devices. Dave Limp, who runs Amazon’s devices business, said the gadgets put Alexa beside users “throughout the day.” The on-the-go nature of Amazon’s vision for Alexa highlights the limits of the company’s reach with the technology. While Amazon is the leading seller of smart speakers like the Echo, its top competitors for voice assistants, Apple and Google, have long had their assistants integrated into their smartphones. But the devices also showed one of Amazon’s advantages. Alexa is just one of many businesses where Amazon has big ambitions, along with e-commerce and cloud computing, giving the company lots of room for experiments and failures. “They are on a track to continue to penetrate the home, and then take it out of the home,” said Carolina Milanesi, an analyst with the market research firm Creative Strategies. The new $130 Echo Buds are Amazon’s answer to Apple’s AirPods, with noise-reduction properties and the ability to summon Alexa. Echo Frames, a $180 set of experimental prescription eyeglasses, and Echo Loop, a $130 smart ring, have miniature microphones and speakers to communicate. Limp also revealed a series of refinements to the core Alexa assistant, such as adapting her voice to better fit the information she conveys. Introducing pop songs, she may sound peppy; for a newscast, she might channel her inner NPR announcer. Limp also announced the ability to have Alexa speak as if she were the actor Samuel Jackson, for the cost of 99 cents. “We’ve put a lot of work into her voice,” Limp said. Many of the new announcements for the kitchen and living rooms integrate screens with smart speakers, an acknowledgment that voice alone is not the most convenient way to convey some information. Rattling off a full recipe for a cake can be unhelpful, for example. A new partnership with the Food Network will provide step-by-step recipe instructions for on-demand and live cooking classes. And although the audio quality of the Echo, the smart speaker that helped drive Alexa’s popularity, has improved in recent years, Limp unveiled the $200 Echo Studio, which creates the experience of surround sound. “These build the sense of space around you,” Limp said. That is part of an effort to lure audiophiles with sophisticated sounds and high-definition, remastered music. But the most quirky and experimental efforts look at ways to expand beyond those rooms. A $25 Echo Flex, a small box that plugs into a wall outlet, is more focused on being a basic point of entry communicating with Alexa, rather than being entertaining. “Here you really go to the core of what Alexa is,” Milanesi said. They can be used to set alarms, get the news or connect to smart home attachments such as a night light. Limp said he had installed one in his bathroom. “There is no reason not to put them everywhere in your house,” he said. Amazon Is Working On Privacy Legislation. In an event with reporters on Wednesday, Amazon’s chief executive, Jeff Bezos, said the company would support privacy legislation, though he provided few details. “Good regulations in this arena, I think, would be very welcome by all the players,” he said. He said Amazon was working to draft privacy legislation for facial recognition technology in particular. Amazon has come under scrutiny for the tools it sells to law enforcement, and because of uncertainty over what it does with the images from its Ring security cameras, which were included at the device showcase. “It’s a perfect example of something that has really positive uses, so you don’t want to put the breaks on it,” Bezos said. “At the same time, there is lots of potential for abuses with that kind of technology, so you want regulations.” He said he would welcome “good regulations” on the issue. “That kind of stability, I think, would be healthy for the whole industry,” he said. Bezos did not provide details about what the company’s proposed legislation would entail.

Tweets by @forbesindia
'Xiaomi India has outdone our expectations': Lei Jun
Juul replaces its CEO with a tobacco executive