The move, announced in the live-streamed start to the company's conference for developers, marks the end of a 15-year partnership 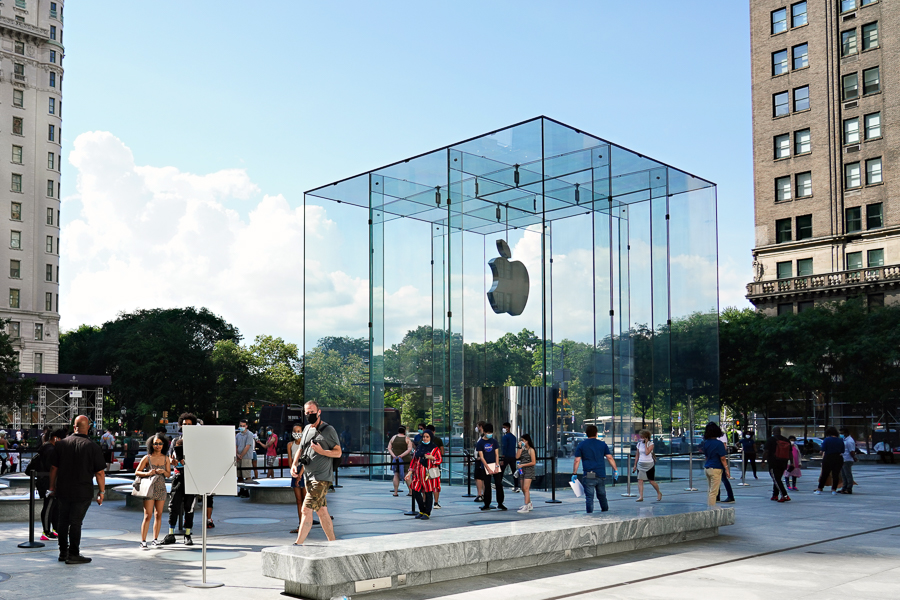 APPLE STORE ON 5TH AVENUE, NY CITY: People stand in a socially distanced line outside the Apple Store on Fifth Avenue as the city moves into phase two re-opening from the coronavirus pandemic on June 21, 2020 in New York City. New York State Governor Andrew Cuomo has announced that New York City is on track for Phase 2 re-opening on June 22.
Photo by Cindy Ord/Getty Images

Apple confirmed on Monday that it would design the processors inside its new Mac computers, ditching Intel, its partner of 15 years, and completing a yearslong effort to control the core components underpinning its main devices.

Apple’s move, announced at the start of its annual developers conference, is the latest sign of the growing power and independence of the biggest tech companies.

Making the silicon chips that power computers has been a multibillion-dollar industry for decades, creating giants like Intel that built their businesses by supplying PC makers with the processors for their devices.

While companies like Dell and HP still rely on Intel for the chips inside their laptops, Apple has become large enough to design and produce its own silicon with the help of Asian chipmaking partners. Apple already made custom chips for iPhones, iPads and the Apple Watch, and now it will do so for its final major product line: the Mac.

“When we make bold changes, it’s for one simple yet powerful reason: so we can make much better products,” Apple’s chief executive, Tim Cook, said during a recorded video announcing the change Monday. “When we look ahead, we envision some amazing new products, and transitioning to our own custom silicon is what will enable us to bring them to life.”

Johny Srouji, the head of Apple’s chip team, said in the video that Apple’s processors would make Mac computers faster and more powerful, while consuming less power. Apple, Microsoft and Adobe have already transitioned many of their Mac apps to the new chips, Apple said, and developers will be given tools to make their software work on the new computers, too.

The most noticeable change for Mac users: IPhone and iPad apps will work directly on Mac computers with the Apple chips, with few if any changes needed by their developers.

Apple’s Mac chips are expected to be built by Taiwan Semiconductor Manufacturing, the partner Apple uses to build similar components it designs for iPhones and iPads — an arrangement much like Apple’s use of Foxconn to assemble iPhones.

Losing Apple as a customer is a symbolic hit, as well as a financial one. Intel sells to Apple about $3.4 billion in chips for Macs each year, or less than 5% of Intel’s annual sales, according to C.J. Muse, an Evercore analyst.

“Intel remains focused on delivering the most advanced PC experiences and a wide range of technology choices that redefine computing,” the company said in a statement. Intel-powered computers give users “the best experience in the areas they value most, as well as the most open platform for developers.”

With the full transition to take two years, Cook said Apple still had several Intel-based Macs in its product pipeline.

Apple’s Worldwide Developers Conference is the company’s annual get-together with the entrepreneurs and programmers who make the apps and services that run on iPhones, iPads and Macs. Apple uses the weeklong event to tell developers about its new software, teach them new tools and further cultivate them as Apple loyalists.

With this year’s conference fully virtual for the first time, Apple already had a challenge. But then last week, the hot topic in tech circles became Apple’s control over its App Store and the fees and rules it enforces on app developers.

The European Union announced an antitrust investigation into how Apple wields its control over the App Store, responding to a complaint from Spotify. The music-streaming service has protested Apple’s strict rules on Spotify’s iPhone app, including that Apple collects 30% of the revenue from many Spotify subscribers.

Apple did announce a new feature that could further upset many developers: App Clips, a way for iPhone owners to basically use an app without having to download it. For the feature to work in many cases, users would sign in and pay for an app’s services with Apple’s proprietary systems, further entrenching Apple between businesses and their customers — a central complaint of many app developers.

Many iPhone users, however, will probably like the feature; it means they will have to download fewer apps, with privacy policies they haven’t read or don’t understand.

On the privacy front, Apple made three significant moves in its new iPhone software, set for this fall. Apps will have to get permission from iPhone owners to track them across other apps and the web. Apps must clearly say what data they collect and share about a user, before they are downloaded. And iPhone owners can choose to share just their approximate location with apps.

Those changes could have the biggest long-term impact of any of Apple’s announcements on Monday. They could sharply reduce the amount of data many apps collect about their users, which would hamper their advertising-based business models. Apple has benefited from the digital economy’s slow shift away from advertising and toward subscriptions; Apple takes a cut of many of the subscriptions sold in the App Store.