By Liz Alderman and David Gelles 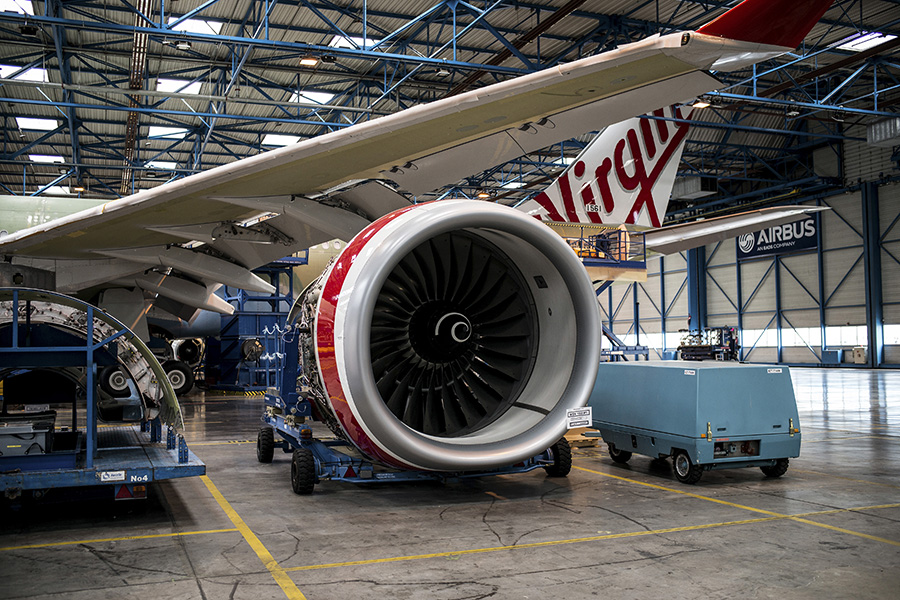 An Airbus A330 on the assembly line at Toulouse Blagnac, France, July 7, 2014. Airbus has been unable to take advantage of the shortfall at Boeing partly because it can’t build planes fast enough. (Ulrich Lebeuf/The New York Times)

PARIS — The troubles plaguing Boeing after the yearlong grounding of its 737 Max plane have created an unusual opening for its chief rival, Airbus, to swoop in and grab business. There’s just one hitch: Airbus is in no position to benefit.

The European aerospace giant, which last year took the title from Boeing as the world’s biggest plane-maker, has such a large backlog of orders to fill that it cannot immediately produce more of its popular narrow-body jets that airlines view as an alternative to the Max.

“It might look like a paradox, but in the short term, we don’t benefit from the situation with our competitor,” Airbus’ chief executive, Guillaume Faury, said Thursday at a news conference in Toulouse, France, announcing the company’s 2019 annual results.

Airbus has been unable to take advantage of the shortfall at Boeing partly because it can’t build planes fast enough. Production of Airbus’ A320 jets — the main competitor to the 737 Max and the bulk of Airbus’ commercial business — is months behind schedule because of slowdowns at some of its European factories.

As it is, the company’s A320 jets are sold out through 2025, Faury said, making it “difficult if not impossible” to make new planes quickly for airlines that have been left scrambling to find an alternative since Boeing stopped producing the Max.

Even so, in the long-running duel between the two rivals for the top spot in commercial aviation, Airbus is riding high.

In the year since Boeing’s most important plane was grounded after two deadly crashes killed 346 people, orders for the Max have dried up, and Boeing has been unable to deliver the roughly 400 Max planes it built since the grounding began in March.

Last month, Boeing said the costs associated with the Max grounding were likely to exceed $18 billion. Those costs may rise further, with airlines that were counting on the Max continuing to lose money and the 737 factory in Renton, Washington, still shut down.

Boeing said this week that it did not record any new orders for commercial airplanes in January and that it delivered just 13 planes in the month. Although the start of the year is usually a slow time for orders, and the deliveries were dented by the Max grounding, the dismal numbers were a reminder of the depths of Boeing’s problems. It was the first time in decades that Boeing failed to record any commercial orders in January.

Still, on Thursday, Airbus reported an overall loss of 1.36 billion euros ($1.48 billion) for 2019. The main reason for the shortfall was an agreement to pay $4 billion in fines to France, Britain and the United States to settle a lengthy global corruption investigation, removing a legal cloud as it sought to keep ahead of Boeing.

Despite the hit, Airbus reported record deliveries in 2019 of 863 commercial aircraft, up from 800 in the year before, and an increase in orders to 768 jets, from 747, as Boeing stumbled. With the Max grounded, Airbus also sought to shore up its advantage in the narrow-body market by raising its stake in the A220, a jet developed by Bombardier, a Canadian plane-maker.

Delivering on orders is Airbus’ biggest challenge. Faury said the company planned to ramp up production of the A320neo, its best-selling single-aisle jet and an alternative to the Max, to around 67 a month in 2023, up from a target of 63 a month in 2021. Suppliers had balked when Airbus sought to accelerate the timetable further, he noted.

But analysts said splashing money on increasing production might be a problem if it made the planes more expensive, or if Airbus had to slow production again.

For now, however, even if Airbus continued to produce planes at the same rate, it is likely to stay ahead of Boeing, said Richard Aboulafia, vice president for analysis at Teal Group. “By doing nothing, they’re doing a great deal. Market trends are benefiting them hugely.”

Airlines have focused on flying point to point rather than routing through giant hubs, a shift that led to the sunsetting of the Airbus A380, one of the world’s largest jets. For these sorts of flights, airlines prefer to use planes from the Airbus A320 family or the Boeing 737 Max 8 — and at the moment, all the orders are for Airbus A320-type planes, said Aboulafia.

“This is the best of all worlds for Airbus,” he said. “It’s an enviable position.”

The Max crisis is also affecting Boeing in ways that go beyond immediate costs, lost orders and delayed deliveries. Plans for the company’s next major commercial airplane have effectively been put off.

“There is a benefit to Airbus from the Max grounding,” said Scott Hamilton, managing director of Leeham, an aviation consultancy. “It has delayed any decision by Boeing for a new midmarket airplane.”

Still, the Max could be flying soon. The head of the Federal Aviation Administration said last week that a critical test flight could happen in the next few weeks, setting in motion the complex process of clearing the plane’s return to service. If no other major problems with the Max are found, airlines could be using the plane for commercial flights this summer.

And when that happens, Boeing can start delivering its stockpiled jets and could start logging new orders for the Max again.

“When the 737 Max is released and cleared for flying, it’s going to be the safest airplane in the world,” Charlton said, pointing out that British Airways placed an order for 200 Max planes in June after the second fatal crash. “There’s going to be no bit of that airplane that hasn’t been crawled over a million times.”

If Boeing then opts to offer heavy discounts, Airbus could be forced to do the same. Airlines can seek discounts after their planes have been ordered.

“Suddenly, their order book becomes a burden, not an asset,” he said.

Tweets by @forbes_india
How the Coronavirus numbers changed so sharply
Squadcast: A SaaS startup that keeps IT systems up and running