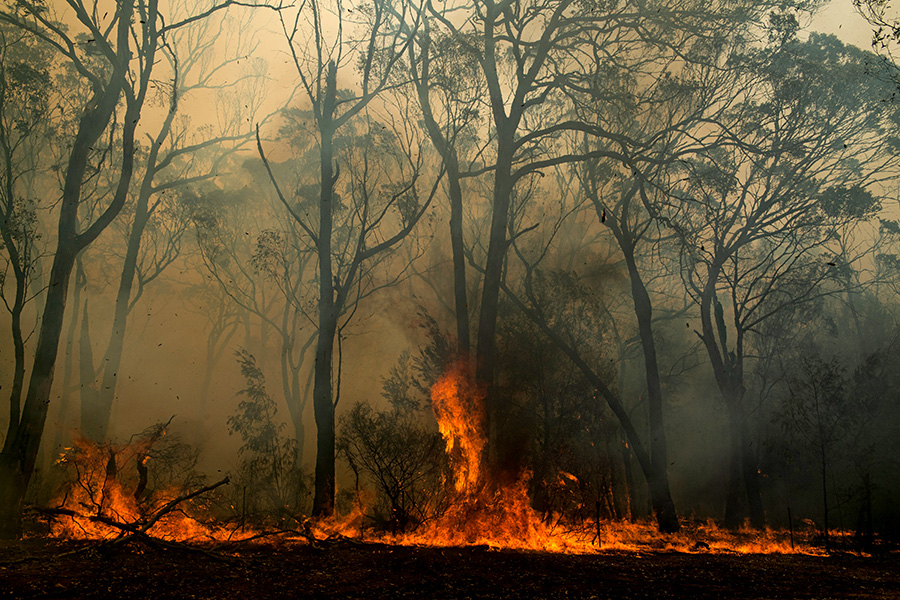 FRANKFURT, Germany — Climate change has already been blamed for deadly bush fires in Australia, withering coral reefs, rising sea levels and ever more cataclysmic storms. Could it also cause the next financial crisis?

A report issued this week by an umbrella organization for the world’s central banks argued that the answer is yes, while warning that central bankers lack tools to deal with what it says could be one of the biggest economic dislocations of all time.

The book-length report, published by the Bank for International Settlements in Basel, Switzerland, signals what could be the overriding theme for central banks in the decade to come.

“Climate change poses unprecedented challenges to human societies, and our community of central banks and supervisors cannot consider itself immune to the risks ahead of us,” François Villeroy de Galhau, governor of the Banque de France, said in the report.

Central banks spent much of the past 10 years hauling their economies out of a deep financial crisis that began in 2008. They may well spend the next decade coping with the disruptive effects of climate change and technology, the report said.

The European Central Bank, which Thursday concluded a two-day meeting in Frankfurt focusing on monetary policy, is beginning to grapple with those challenges. The bank did not make any changes in interest rates or its economic stimulus program Thursday. Instead, other issues are coming to the fore.

Christine Lagarde, the central bank’s president, who took office late last year, has pledged to put climate change on the bank’s agenda, and the issue will play an important role as the ECB embarks on the first comprehensive review since 2003 of how it conducts monetary policy.

“While we might not be ahead of the curve yet, we are not sitting on our bottoms doing nothing,” Lagarde said during a news conference Thursday, noting that the bank’s employee pension fund is shifting investment to companies with lower carbon dioxide emissions. “It is going to be an important matter that will be debated during the strategy review.”

The ECB formally began the review Thursday, saying it would be done by the end of the year. The review will focus on how to steer inflation in the eurozone, the bank’s main job, while also considering “the threat to environmental sustainability, rapid digitalization, globalization and evolving financial structures.”

But there will probably be disagreement within the bank’s Governing Council about using all of its financial firepower to help avert a climate catastrophe.

When buying corporate bonds to influence market interest rates, for example, the bank could exclude debt of corporations considered big producers of greenhouse gases. That approach could have a powerful effect on financial markets, encouraging private investors to follow suit by also acquiring bonds of companies considered sustainable and dumping debt issued by polluters.

Lagarde acknowledged that some members of the Governing Council question whether fighting climate change is a central bank’s job.

“I’m aware of all that,” Lagarde said. “I’m also aware of the danger of doing nothing.”

This new attention to the financial consequences of a hotter Earth comes as central banks are contending with another new challenge: technologies that threaten their monopoly on issuing money and their power to combat a financial crisis.

Digital currencies like bitcoin and Libra, Facebook’s planned offering, bypass central banks and could undermine their control of the monetary system. One solution is for central banks to get into the digital currency business themselves.

On Wednesday, the central banks of Britain, Canada, Japan, Sweden and Switzerland said they were working together with the Bank for International Settlements to figure out what would happen if they did just that.

Such a system could be more efficient, but also risky, said a report issued Wednesday by the World Economic Forum, the organization that stages the annual conclave in Davos, Switzerland.

Commercial banks might become superfluous and fail, leaving central banks to become, in effect, giant retail banks. But they have no experience dealing with millions of individual customers and could be overwhelmed. If a central bank collapsed, so would the monetary system.

By some estimates, global gross domestic product could plunge by nearly one-quarter by the end of the century because of the effects of climate change. Central banks have enough trouble dealing with mild recessions and would not be powerful enough to combat an economic downturn of that scale.

“In the worst case scenario, central banks may have to intervene as climate rescuers of last resort or as some sort of collective insurer for climate damages,” said the Bank for International Settlements report.

It suggested some precautionary measures central banks could take.

Central banks, which often function as bank regulators, could require lenders to increase capital reserves if they hold assets vulnerable to the economic effects of a shift to renewable energy. An example might be a bank that has lent a lot of money to fossil fuel companies, or to the Saudi government.

The auto industry already illustrates how investors are moving their money away from companies seen as polluters and into those seen as environmentally friendly, with disruptive effects on economies. Tesla’s value on the stock market is more than $100 billion, second only to Toyota among carmakers. (Toyota is still worth more than twice as much as Tesla.)

In this way, Tesla is being rewarded for producing emission-free electric vehicles. But the migration of capital away from the established manufacturers makes it difficult for them to invest in new technology, and it could result in huge job losses as well as social and political upheaval.

Central banks need to coordinate their policies to deal with these new challenges, said the Bank for International Settlements report. Unfortunately, coordination is not something that central banks are very good at right now.

“Climate change is a global problem that demands a global solution,” the paper said. But, it added, “monetary policy seems, currently, to be difficult to coordinate between countries.”