Extreme weather could disrupt company supply chains or stricter climate regulations could hurt the value of coal, oil and gas investments. Early estimates suggest that trillions of dollars may be at stake 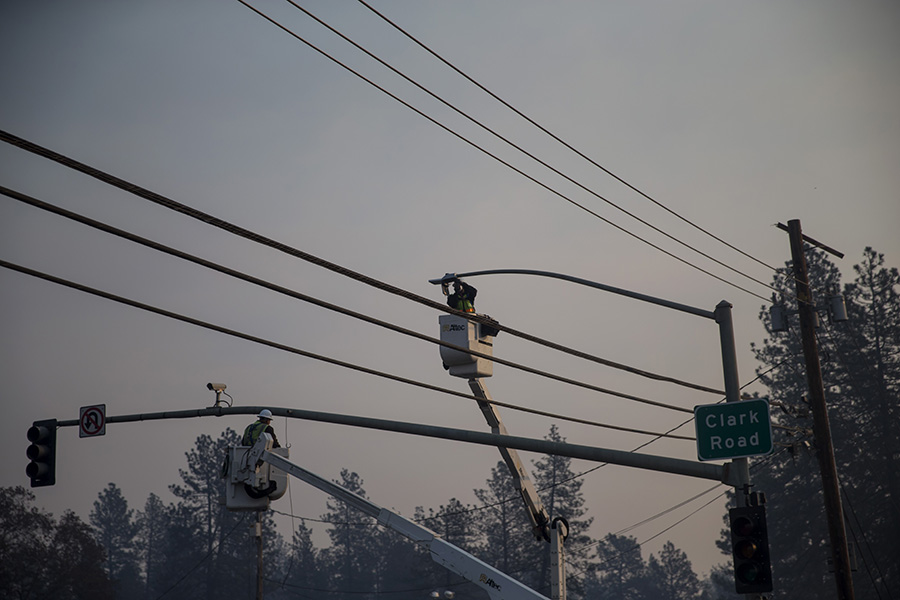 Power crews work on lines in the aftermath of the Camp Fire in Paradise, Calif., Nov. 16, 2018. Some of the world's largest companies estimate they face roughly $1 trillion in climate-related risks, with most of that looming in just the next five years.
Image: Eric Thayer/The New York Times


WASHINGTON — Many of the world’s biggest companies, from Silicon Valley tech firms to large European banks, are bracing for the prospect that climate change could substantially affect their bottom lines within the next five years, according to a new analysis of corporate disclosures. Under pressure from shareholders and regulators, companies are increasingly disclosing the specific financial effects they could face as the planet warms, such as extreme weather that could disrupt their supply chains or stricter climate regulations that could hurt the value of coal, oil and gas investments. Early estimates suggest that trillions of dollars may ultimately be at stake. Even so, analysts warn that many companies are still lagging in accounting for all of the plausible financial risks from global warming.

“The numbers that we’re seeing are already huge, but it’s clear that this is just the tip of the iceberg,” said Bruno Sarda, the North America president for CDP, an international nonprofit that wrote the new report and works with companies around the world to publicly disclose the risks and opportunities that climate change could create for their businesses. In 2018, more than 7,000 companies submitted such reports to CDP, formerly known as the Carbon Disclosure Project. And, for the first time, CDP explicitly asked firms to try to calculate how a warming planet might affect them financially. After analyzing submissions from 215 of the world’s 500 biggest corporations, CDP found that these companies potentially faced roughly $1 trillion in costs related to climate change in the decades ahead unless they took proactive steps to prepare. By the companies’ own estimates, a majority of those financial risks could start to materialize in the next five years or so. The disclosures show how business leaders expect climate change, and the policy responses to it, to ripple through every corner of the global economy. Many firms are bracing for direct impacts. Hitachi Ltd., a Japanese manufacturer, said that increased rainfall and flooding in Southeast Asia had the potential to knock out suppliers and that it was taking defensive measures as a result. Banco Santander Brasil, a large Brazilian bank, said increasingly severe droughts in the region might hurt the ability of borrowers to repay loans. Google’s parent company, Alphabet, Inc., noted that rising temperatures could increase the cost of cooling its energy-hungry data centers. Others are keeping a close eye on the potential public reaction to climate change. Total, a French energy company, is grappling with the possibility that ambitious efforts by nations to limit global warming and restrict fossil fuel use could render some oil and gas reserves “unburnable.” BASF, a German chemical company, said it has a “significant corporate carbon footprint” that could scare off environmentally conscious shareholders unless it takes steps to act on climate change. In all, the world’s largest companies estimated that at least $250 billion of assets may need to be written off or retired early as the planet heats up. Those assets include buildings in high-risk flood zones, or power plants that may have to shut down in response to tighter pollution rules. The disclosures offer only a partial glimpse at the potential price tag of climate change. Only a fraction of companies worldwide currently report their climate risks, and many large firms, including energy giants Exxon Mobil and Chevron, did not submit a disclosure to CDP last year. The companies that do disclose often struggle to tease out precisely how rising temperatures might hurt or help them financially. For instance, Sarda said, it’s relatively straightforward for businesses to calculate the potential costs from an increase in taxes designed to curb emissions of carbon dioxide, a major greenhouse gas that contributes to global warming. Indeed, this is one of the most common climate-related risks that companies now disclose. But it’s trickier to take scientific reports about rising temperatures and weather extremes and say what those broad trends might mean for specific companies in specific locations. Previous studies, based on computer climate modeling, have estimated that the risks of global warming, if left unmanaged, could cost the world’s financial sector between $1.7 trillion to $24.2 trillion in net present value terms. A recent analysis published in the journal Nature Climate Change warned that companies are reporting on these risks only “sporadically and inconsistently” and often take a narrow view of the dangers that may lie ahead. On the flip side, the CDP report found, many companies also see moneymaking potential in climate change. Some 225 of the world’s largest corporations highlighted roughly $2.1 trillion of possible opportunities in a warming world, with the majority expected to materialize within the next five years. Eli Lilly, a drugmaker in the United States, cited research suggesting that rising temperatures could drive the spread of infectious diseases — a problem the company was well-positioned to help address. “This may then increase demand for certain medicines we produce,” the firm said. (At the same time, the company also warned that climate change could hurt financially if flooding and fiercer storms disrupted its manufacturing facilities in places like Puerto Rico, as happened after Hurricane Maria in 2017.) And any shift toward clean energy sources offers a chance to profit. ING Group, a Dutch financial services firm, estimated that the shift to a low-carbon economy could require $30 trillion in new investments toward clean energy and energy efficiency worldwide. As a result, ING aims to double its “climate finance portfolio” by 2022, the company said in its disclosure. The report comes as financial regulators have expressed growing concern that markets are not yet fully pricing in the potential financial consequences of climate change. Last month, the European Central Bank warned that a spate of severe weather that caused major losses for insurers, or an unexpectedly rapid shift by investors away from fossil fuels could hit the balance sheets of unprepared banks and potentially destabilize the financial system. “Climate change-related risks have the potential to become systemic for the euro area,” the bank said, “in particular if markets are not pricing the risks correctly.” In 2015, the Financial Stability Board — an influential panel made up of finance ministers, central bankers and regulators from the world’s largest economies — established a task force that aimed to coax banks and other businesses to be more transparent about their climate risks. But progress has been slow. The CDP report found that companies headquartered in the European Union are much more likely to detail the potential financial effects of global warming, in part because local regulations often require them to do so. By contrast, companies in the United States, China, Brazil and Mexico were far less likely to report significant financial risks.