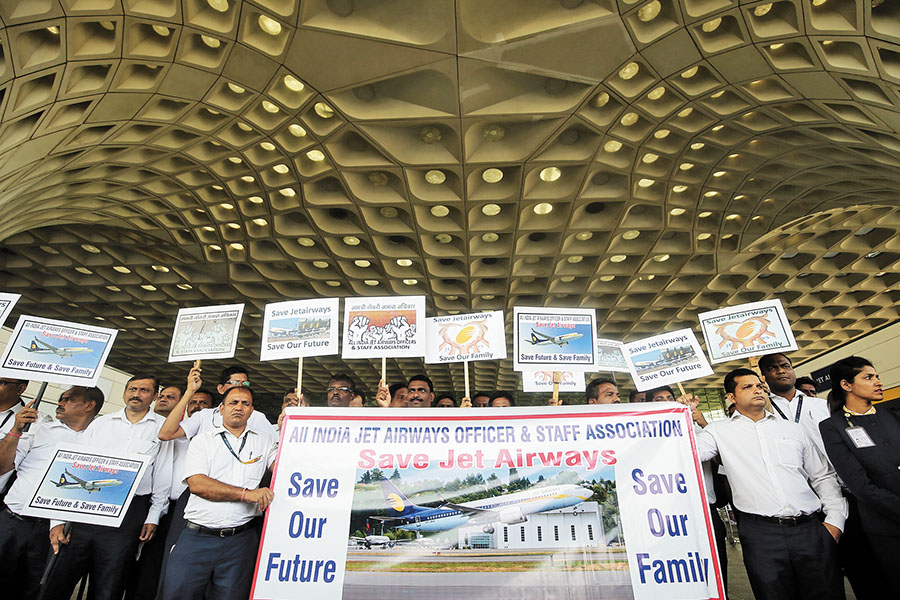 Two years down the line, the industry is in the doldrums. Jet Airways has shut down, Air India couldn’t find any buyers when the government sought to sell it, IndiGo is facing disputes among its promoters, and the government’s ambitious regional connectivity scheme is yet to gather momentum. All this is in addition to the high costs and lower yields that have plagued the industry for decades.

The biggest shock came in May, when data showed that the overall domestic passenger traffic between January and April 2019 grew at only 2.5 percent, significantly lower than the 24.6 percent growth in the corresponding period last year. Between this January and March, India’s airlines carried a total of 464.47 lakh passengers compared to 453.03 lakh in the corresponding period last year.

“What is happening in the aviation sector is a man-made mess,” says Jitendra Bhargava, a former executive director of Air India. “We can’t have a situation where an airline goes bust every four or five years. There has to be rationalisation in terms of fares to make the business more viable. It’s often difficult to raise fares, but that’s the only sustainable model.”

Others believe the crisis is cyclical, and the sector will return to normalcy soon. “What we are seeing this year is primarily a factor of Jet Airways shutting down, and the A320 Neo and Boeing 737 Max being withdrawn, which has affected routes and fares,” says Mahantesh Sabarad, head of retail research at SBICap Securities.

Nevertheless, India’s aviation sector has some deep-rooted problems, which, if not rectified, could push the sector into a crisis.

The Current Crisis
When the Mumbai-headquartered Jet Airways shut operations on April 17—its debt had risen to over $1.2 billion, and it couldn’t find an investor—it led to a significant reduction in total available seats, pushing up fares.

“The discontinuation of operations by Jet Airways has impacted 14 percent of the total industry capacity,” says Kinjal Shah, vice president, and co-head, corporate sector ratings, ICRA in a report. “Overall, the moderation in capacity starting February 2019 has resulted in increased airfares of 30 to 40 percent over September 2018 to March 2019.”

According to Mark Martin, founder of Dubai-based Martin Consulting, India has an aircraft shortage. “We are in a precarious situation,” he says. “We need about 400 more aircraft to sustain the kind of growth we need in the next few years, and yet we are short of nearly 200 aircraft. This sector has several tariffs and import duties, and all this has made capacity growth difficult.” The government is working on giving away Jet’s slots and routes to other private carriers.

Towards a turnaround
As early as 1953, JRD Tata, the father of Indian aviation, had perhaps found the reason behind the mess that our aviation would eventually find itself in. “The main causes of the losses are to be found, not in high operating costs, but the unviable low fares and mail rates and the crushing burden of fuel taxation imposed upon it,” he had said.

Traditionally, India’s airline businesses have been run on razor-thin margins, mainly due to high taxes on aviation fuel, that account for about 50 percent of operating costs. Feeling compelled to offer low fares, airlines have expanded capacity at the cost of profits.

“Perhaps, this is the time to reconsider the low fares and correct them,” says Bhargava. “I expect that with the collapse of Jet Airways and the rising fares, airlines could see some improvement in their fortunes.”

IndiGo is stepping on the pedal. “The situation with Jet, in February and March, increased our unit revenue by 3 to 4 percent,” Ronojoy Dutta, CEO, told analysts. They are expecting an increase in unit revenue cost by over 5 percent this year.  “Looking ahead, it is difficult not to be bullish about the future. We see plenty of opportunities for profitable growth in our network, and with a robust delivery stream of new aircraft, we are well positioned to capitalise on this growth.”

Would that mean higher fares? “Corporate India has realised that margins need to be protected,” says Jagannarayan Padmanabhan, director at Crisil. “We are in the midst of a transition. Two years ago, average fares were around ₹4,500. And even as crude oil prices rose, fares actually fell. Now, with capacity shortage, fares have increased.”

In addition to fares stabilising, and improving margins, it also helps that the government is likely to pursue its plan to sell its stake in Air India. “There is enough space for one more airline to compete with Vistara as a full-service carrier,” says Padmanabhan. “We see 8 to 10 percent growth in the sector in the next few months, which will then be the norm.”

India’s carriers are expected to post collective losses of between $550 million and $700 million in FY20, compared to about $1.7 billion losses for the year ended March 2019, according to Australian aviation consultancy Center for Asia Pacific Aviation.

There is also the need to address issues such as high taxes on crude oil. India’s aviation fuel costs nearly 30 percent more than in Malaysia, Thailand and Indonesia. “The only way out is to ensure an exemption from levies, and extend a sovereign guarantee for all airlines. The problem is the government continues to think of air travel as a luxury. That’s got to change and [the government must] ensure that enough subsidies are given for schemes such as Udan,” says Martin.