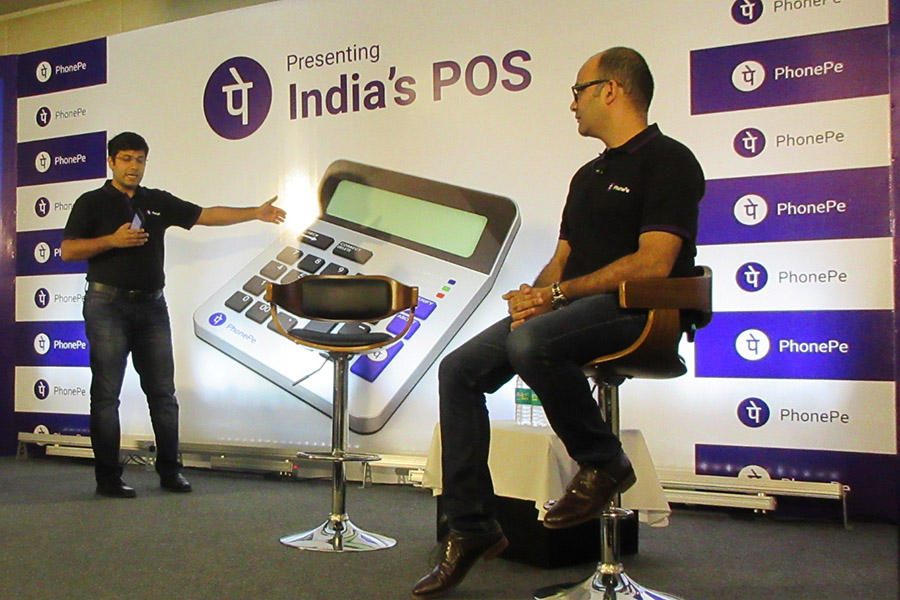 PhonePe CTO Rahul Chari explains the features of the company’s new point-of-sale (POS) device as CEO Sameer Nigam looks on, at a press conference in Bengaluru on Tuesday

Flipkart’s PhonePe mobile wallet unit has launched a portable point-of-sale device reminiscent of the handheld calculator, but which holds the promise of expanding India’s digital payments ecosystem to both small merchants in the cities and to smaller towns and villages across the country.
The made-for-Indian-conditions device works several months at a stretch on standard AA batteries, and doesn’t need an internet connection, relying only on the consumer’s smartphone data connection.

Other than that, the device holds only the minimum required details of a merchant’s identification hardwired into it, “It looks and feels and acts like a calculator, it costs less than $10 (nearly ₹650) and it is a plug and play product,” PhonePe CEO Sameer Nigam told reporters at a conference in Bengaluru, launching the device.

India’s push towards digital money — including a demonitisation diktat that scrapped the two highest valued currency notes in November 2016 — has helped raise the number of online transactions. However, the transition is still a nascent one as the bulk of payments in the country are still cash-based, even as the nation has set itself the ambition of achieving 25 billion digital money transactions next year.

Computer scientists, both who have also just turned 40, Nigam and co-founder Rahul Chari are serial entrepreneurs, having built two other businesses before PhonePe. They started PhonePe in 2015, but quickly sold it to Flipkart the following year, where they had previously worked and developed the Flyte music download service, which was ahead of its time, and ironically failed more for the lack of a simple micro-payments infrastructure, Chari recalls in a brief interview on the sidelines of Tuesday’s conference. Chari is the CTO at PhonePe.

Flipkart, India’s largest e-commerce marketplace, expects to invest $500 million in expanding PhonePe’s operations, the company said in a press release earlier this month. This was in addition to the $75 million funds infusion Flipkart has made in PhonePe since acquiring it in 2015, the company said.

The PhonePe app has seen about 50 million installs, according to Flipkart. In September 2017, the app saw 16 million transactions and Chari expects the numbers in October to be even higher. Today, PhonePe is on track to process about $3.5 billion in payments volume over the next 12 months.

PhonPe expects to pilot the point of sale device in Bengaluru with about 5,000 units to start with, and then roll it out across the country. The device was designed in-house and contract manufactured. PhonePe has also applied for a few patents on the device, Nigam said at the conference.