Finance ministers and central bankers from the world's major industrialised nations said the Group of Seven would hold an emergency call Tuesday morning to discuss economic responses to the outbreak, as analysts warn of a possible recession if the outbreak continues

By Jeanna Smialek and Jack Ewing 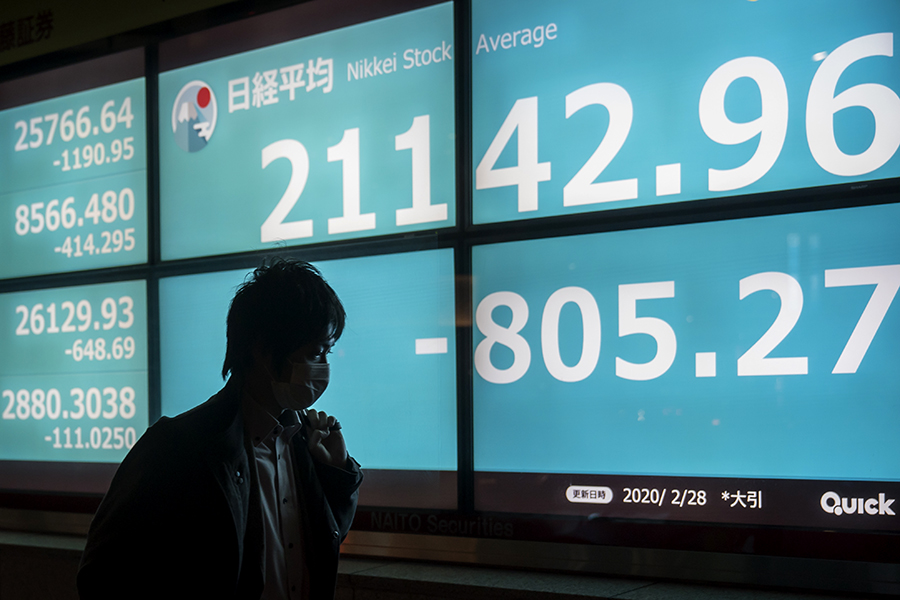 TOKYO, JAPAN - FEBRUARY 28: A pedestrian walks past an electronic board displaying the closing figure of the Nikkei Stock Average on February 28, 2020 in Tokyo, Japan. The Nikkei 225 dropped 3.67% on Friday as a growing number of events and sporting fixtures are being cancelled or postponed around Japan while some businesses are closing or asking their employees or work from home. Prime Minister Abe has also asked schools to close for around a month as Covid-19 cases continue to increase and concerns mount over the possibility that the outbreak will force the postponement or even cancellation of the Tokyo Olympics. (Photo by Tomohiro Ohsumi/Getty Images)

Global policymakers moved to ease public anxiety over the coming economic hit from the coronavirus on Monday, as analysts warned of a severe slowdown in growth and a possible recession if the virus continued to spread.

Finance ministers and central bankers from the world’s major industrialized nations said the Group of Seven would hold an emergency call Tuesday morning to discuss economic responses to the outbreak. The World Bank and International Monetary Fund signaled they were also ready to provide assistance, particularly to poor nations. Monetary policymakers from Japan to Europe on Monday pledged to act as needed to stem any economic fallout as infections spread.

The rush of reassurance came amid increasingly dire economic projections tied to the coronavirus, which is spreading outside of China to South Korea, Italy, France and the United States, idling factories, quarantining workers and curtailing international travel.

The Organization for Economic Cooperation and Development said global growth could plummet to just 1.5% in 2020, far less than the 3% it projected before the virus surfaced, should the outbreak sweep through the Asia-Pacific region, Europe and North America. If things get bad enough, Japan and Europe could plunge into recession, the OECD warned. Predictions for the U.S. were nearly as bad: Most analysts expect zero or negative growth in the second quarter, with some forecasting a potential recession before year’s end.

That glum outlook sent stocks in Europe temporarily lower, but expectations for a far-reaching global response — including the potential for a coordinated interest rate across central banks — helped to stem market bleeding.

The S&P 500 posted its best gain in more than a year, rising by more than 4.6%, amid a surge in interest-rate sensitive sectors such as utilities and real estate. Treasury yields continued to tumble, hitting a record low, as investors bet that the Fed will cut interest rates by half a percentage point at its next meeting.

“It has already stoked expectations of a coordinated cut,” Roberto Perli, a former Federal Reserve researcher who is now an economist at Cornerstone Macro, said in an email following news of the G-7 meeting. “If it doesn’t happen, it will only add to market volatility.”

President Donald Trump joined in pushing for Fed action on Monday, saying that Chairman Jerome Powell and his colleagues should quickly slash interest rates as economic risk from the virus becomes more stark.

“As usual, Jay Powell and the Federal Reserve are slow to act,” Trump wrote on Twitter.

Later, when asked about the state of the economy amid a tumultuous financial week, the president noted that “the market’s up today” and insisted, “Our country’s very strong economically.”

But he said he would like the Federal Reserve to do more to address the financial challenges posed by the spread of the coronavirus.

A senior administration official, who was not authorized to speak publicly about the administration’s response, said Trump and his advisers were not discussing any fiscal stimulus measures, such as immediate tax cuts, because they viewed any damage from the coronavirus as likely to be temporary. Still, the official said, the White House wants the Fed to cut rates, in part to halt a decline in commodity prices.

Powell has not committed to lowering borrowing costs, which are already in a range of 1.5% to 1.75%, lower than in previous expansions. But he signaled on Friday that the Fed was ready to act to support the economy. Investors now expect the Fed to slash rates by half a percentage point at its March meeting or even before, and see borrowing costs drop as much as a full point lower by the end of the year.

Even if the outbreak is mild and mostly contained outside China — the OECD’s expected scenario — global growth could be reduced about half a percentage point relative to previous forecasts, according to an update that the group released on Monday ominously titled “Coronavirus: The World Economy at Risk.”

Goldman Sachs economists expect global growth to slump to around 2% for the full year, down from their previous 3% forecast.

Neil Shearing, group chief economist at Capital Economics, wrote in a note Monday that in a good scenario, global growth will fall to 2.5% this year — the weakest pace since 2009. In a bad scenario, it could shrink by 0.5%, a contraction on a scale with the financial crisis.

Growth in the United States is also at risk from the virus, especially if the number of infections continues to rise. Goldman Sachs economists said in a note Sunday that “while the U.S. economy avoids recession in our baseline forecast, the downside risks have clearly grown.”

The economic effect is slowly filtering through the real economy. Priya Misra, a rates strategist, spends a lot of time thinking about the path of economic growth, so it raised alarm bells in her mind when her employer, TD Securities, cut her international business trip short last week.

It was part of the company’s new ban on nonessential trips. Her concern only grew on Monday, as clients who were planning to come to her from other parts of the U.S. rescheduled in-person meetings to phone calls. And it crescendoed when an out-of-town client told her not to drive to their office — outsiders were no longer allowed into the building.

“That’s why I think the growth impact is still not understood — people don’t travel, people don’t plan vacations,” she said. “Manufacturing was already weak, but will we now see it in consumer spending?”