In the proposed tax regime, states can no longer lure investors with just tax-based incentives. And Gujarat, with its solid infrastructure and governance, is better placed to attract them, says Chief Minister Vijay Rupani 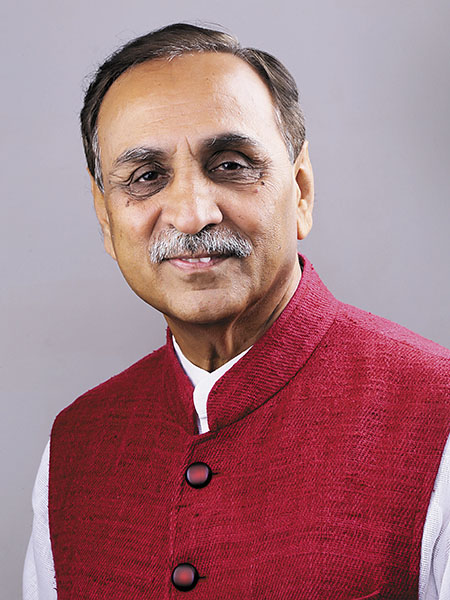 In 2003, the then chief minister of Gujarat (and present prime minister of India) Narendra Modi, started the Vibrant Gujarat Global Summit to restore confidence among investors after the state was battered by the 2001 earthquake. Over the years, this biennial event has grown in scale even as Gujarat has become one of the most attractive Indian states for investments. The state currently has 102 product–specific clusters, 200 industrial estates, 19 special economic zones and 13 special investment regions. It has become a power surplus state with 45 major and minor ports and 18 airports. It topped the states in the ease of doing business ranking in 2015 (it is ranked 3 in 2016).

Not surprising that Gujarat, with just 6 percent of India’s land mass and 5 percent of the population, contributes 7.5 percent of the GDP, 10 percent of the industrial output, accounts for 19 percent of India’s exports and handles 41 percent of the country’s cargo. The present chief minister of Gujarat, Bharatiya Janata Party’s Vijay Rupani, who assumed office in August last year, in a freewheeling chat with Forbes India, talks about the state’s strengths, what he is doing to make it top the ease of doing business chart again, on the impact of the proposed Goods and Services Tax (GST), and how the focus of Vibrant Gujarat has evolved over the years—today it is not about just attracting investments but more about knowledge sharing. Edited excerpts:

Q. Gujarat is one of the top investment destinations, not just in India but across Asia having bettered regions such as China’s Shanghai and Guangdong in 2015, in terms of attracting FDI. What do investors like about the state?
There are two or three factors, in my view, as to why investors prefer Gujarat. The law and order situation is good. The labour laws are balanced—both in favour of the workers and the employers. That is the reason there are no strikes in the state and closure of industries is rapidly declining. The third factor is that Gujaratis, as a community, are traders and business runs in our blood. Also, Modiji, before becoming the prime minister of India, spent 13 years as the chief minister of Gujarat. In that period, he focussed on creating an environment that aided businesses. He developed infrastructure in a big way. Take the case of ports. We have a long coastline and we took advantage of that to build ports. Today, the Kandla and Mundra ports have overtaken the Mumbai port substantially. Every investor feels that if you invest in Gujarat, you will reap the benefits.

Q. In terms of ease of doing business, Gujarat has slipped this year to the third place from leadership position in 2015. What more, in your view, needs to be done to regain leadership position?
When it comes to ease of doing business, our score is already a high 97-98 percent. We are in the process of correcting whatever little shortcomings [we have] through digitisation. We are very conscious of taking the score to 100 percent. We have already simplified norms when it comes to land acquisition. Efficient labour, peaceful climate and an administration that is policy-driven are the state’s key strengths. We will continue with these things.

Q. After you took charge as chief minister in August, you have emphasised on four pillars of good governance...
The four pillars of good governance that I follow—transparent, decisive, sensitive and progressive—will ensure a fully-transparent and corruption-free government. I accept that power corrupts and there is a need to restrict it. Decentralising power is one way to ensure there is no corruption. For instance, we started an interesting programme. We looked at the essential needs that poor people require from the government—getting a ration card, accessing welfare schemes, pension and income/community certificates. These are small things but people go through a lot of pain and face corruption when trying to get them. We formed a high-powered committee comprising 15-17 officers; these officers go to locations that serve a cluster of 10 villages and spend the whole day there to satisfy the needs of the people. So far, 10 lakh people have benefited from this programme. We have rooted out corruption and helped people get the facilities they were entitled to on the spot.

Q. GST doesn’t work well for an industrialised state like Gujarat as you will not get any revenues for goods sold outside the state. How do you see it panning out?
No doubt there will be some challenges for us. But when there is a demand across the country for a single tax which is expected to foster a higher GDP growth, we have to accept it. Also, GST is expected to bring within the tax net many sectors that are currently outside it. The Centre has also assured us that loss of revenue that states incur on account of GST will be fully compensated. We expect that once GST is implemented, there will be some challenges till the system settles down and after that everything should be fine.

Q. GST also means the state has no power to levy taxes and that deprives you of the ability to offer incentives to investors...
In a way GST levels the playing field when it comes to attracting investments. Till now states were competing by bettering the incentive another state offered. All that will come to an end. Only that state that offers good governance, single window clearance, solid infrastructure and zero interference will succeed.

Q. Availability of skilled manpower is a big challenge. What steps have you taken to skill and reskill manpower?
We have over 700 Industrial Training Institutes and are also setting up skill universities across Gujarat even as we expand the Centres of Excellence. We are also telling industries that are investing in the state to set up Centres of Excellence and have promised them all help. They can run the centre and develop skills which they think they require for their industry.

Q. Your government is eyeing a large share of defence-related investments in the country...
Ever since the Centre cleared foreign direct investment (FDI) in the defence sector, it is estimated that a lot of global players will take advantage of it. We want to grab a good share of these investments. Manufacturing of arms and ammunitions is land-intensive as they need space for firing and testing ranges. We have a large desert which can be offered for this purpose. We have just unveiled the Aerospace and Defence Policy 2016 that will be very beneficial for investors.

Q. Gujarat is among the first states to announce large special investment regions. How are they shaping up?
We are seeing good response in the Mandal Becharaji Special Investment Region. Maruti Suzuki is setting up its manufacturing unit there and a whole lot of auto ancillary units are coming up as well. Dholera Special Investment Region houses the Delhi-Mumbai Industrial Corridor. It is a very long-term project and we have acquired a lot of land there.

At Dahej, the Petroleum, Chemicals and Petrochemicals Investment Region (PCPIR) is shaping up well too.

Q. In what way is Vibrant Gujarat 2017 different from its earlier editions?
Prime Minister Modi has travelled around the world raising India’s stature and businesses from various countries are keen to invest in India. Vibrant Gujarat 2017 will facilitate this. The theme this year is ‘Connecting India to the World’.  We are not only projecting Gujarat’s investment friendly policies but also offering Vibrant Gujarat as a platform for other states to showcase their strengths and attract investments.