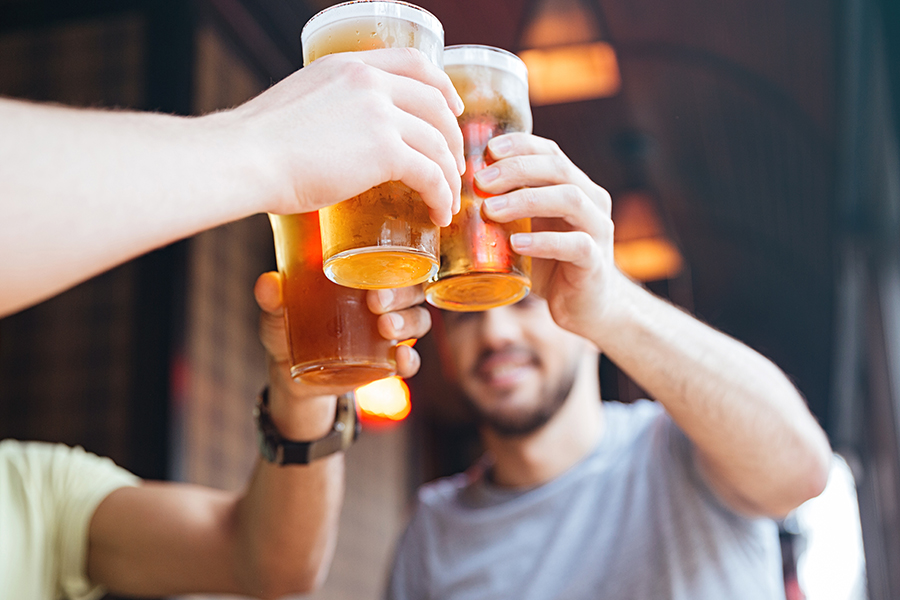 It was Friday evening, March 31, and hospitality entrepreneur Ajit Dhumal was at one of his outfits, the British Brewing Company (BBC), a gastro pub in the busy suburb of Andheri in Mumbai. The area is known for its IT companies and a young professional workforce. Dhumal’s WhatsApp messenger beeped. He was not prepared for the message to follow: Hotels and restaurants within 500 metres of highways will not be allowed to sell liquor.

“I hoped it was a rumour and misinterpretation... but by late evening, it was clear that it was true,” says Dhumal, a director at BBC. The news caught the entire hospitality and real estate industry off guard. The general belief was that this ban — announced through an order by the Supreme Court last week — was meant only for vendor shops and would not impact bars or restaurants.

According to industry experts Forbes India spoke to, the latest Supreme Court order — which follows a broader December 15, 2016 ruling — bans vending of liquor within 500 metres of highways. The ruling is aimed at reducing the incidence of drunk driving and road fatalities along the roadways. Following the December 2016 order, restaurants, hotels and pub owners had sought a clarification between vending and serving liquor. But as the situation stands, experts are still not clear if the distinction has been made. 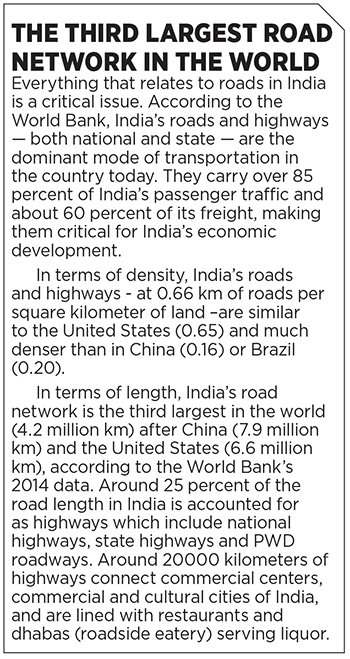 Restaurant owners, especially those operating inside malls situated on city highways never thought they would come under the hammer. “We are shocked by this [court] decision. First of all, neither in any of the allied cases which were made in Punjab and Haryana nor in Tamil Nadu was there ever a mention of bars and restaurants. It was only about liquor shops along the highways. The December 2016 order of the Supreme Court also only spoke about liquor shops. It never spoke about bars and restaurants,” says Riyaz Amlani, CEO of Impresario Entertainment & Hospitality and president of National Restaurant Association of India.

AD Singh, managing director of Olive Bar and Kitchen calls the move unreasonable. “What message are you sending to entrepreneurs in India? On the one hand, the Prime Minister is exhorting us to help build India [and make it] greater. On the other hand, you arbitrarily shut us overnight without any due recourse to law or natural protection that all societies must provide. Tell me, what confidence are you building in any entrepreneur to trust the economic ecosystem in this country then, if you can overnight take everything away from him?”

While there are no exact statistics on the losses restaurant and hotel owners could face, it is estimated that there could be a revenue loss of Rs 50,000 crore and around one lakh people could lose their jobs. The size of the food and beverages industry is estimated at $40 billion in India and is growing at a rapid pace. Investors have always found this business lucrative as the GDP per capita increases.

Some feel the state government will look into the matter as it would not like to lose out on potential revenues they get from this establishment. The immediate reaction of state governments has been to denotify highways as urban roads. It is been reported that states like Rajasthan, Madhya Pradesh, Uttar Pradesh and UT Chandigarh have already begun denotifying state highways.

Though it would be easy to assume that other states will follow suit, it isn’t all that simple as doing that will play havoc with city planning. “We need to understand that real estate projects are not allowed on the highway unless there is a service road. The entry or exit for the project should never be facing the highway. If city highways are denotified, the real estate companies will build their new projects directly facing the highway causing new problems that one cannot fathom,” says an expert working with a leading international real estate consulting firm.

Most mall owners say they invested in the business and purchased real estate with the assurance that they would be allowed to serve liquor. But the present change in law will impact them severely even if the government helps them relocate their business away from the highways without any additional costs. “Unlike a shop, for a hotel, mall or restaurant to relocate itself 500 metres away is a huge borderline impossible task,” says Dhumal. 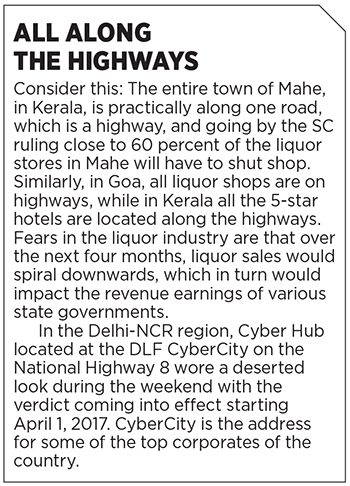 Singh adds, “We have all started businesses only after taking all licenses as per the prevailing laws in the states we are in but here effectively a new law is being made and passed retrospectively. That’s a complete deterrent for anyone to put any investment into business here.”

And while the restaurant owners agree with the intentions of the Supreme Court, they say it will be detrimental to the hospitality industry. “While the verdict has been given out to control drunk driving, a uniform ban like this will be extremely detrimental to the hospitality industry. It may be worthwhile to note that hotels and restaurants that are close to the highway are actually not places where you can pick up a bottle of alcohol and drive off. We are regulated and have licenses. I would say hotels and restaurants are actually the safest places to have a drink. They don’t serve alcohol to people under 25,” Kapil Chopra, president, Oberoi Group.

Dhumal adds that the malls hardly cater to the highway traveller. Over the last fifteen years, it is the suburbs on the outskirts of most cities that have seen the highest growth. The density of people in these area is very high in Mumbai, Gurugram, Noida and even places like Chennai and Bangalore. All these new residential complexes are closer to highways than railway stations or the nearest public transport. These are young workers who are in many cases migrants and also have high paying jobs. For them going to a mall is more of a recreational activity and they hardly drive for more than three to five kilometers.

Dhumal says two of his BBC outlets fall under the “highway situation” and will be hugely impacted. “One is at Viviana Mall in Thane and the other at Oberoi Mall in Mumbai. On an average weekend, our Oberoi restaurant would do gross sales of about Rs 5 lakh which dropped to around Rs 2.5 lakh. The Thane outlet which does Rs 3 lakh is down by 50 percent,” he says.

Nirzar Jain, senior vice president, Nexus Malls, says “We have four malls, in Gujarat, Punjab (Amritsar), Pune and Navi Mumbai. One mall in Amritsar will be affected by this order. This is being intensely debated. A lot of people have put in money in restaurants. [And in any] popular restaurants, 40 percent sales come from alcohol, but the profits from the sale of alcohol are higher so the hit on the bottomline would be higher.”

“My problem is that there are a lot of highways going through the city, which inadvertently get impacted by this verdict,” says T J Venkateshwaran, managing director of Rian Hospitalities, which owns and operates the microbrewery TJ’s BrewWorks in Pune.

Some restaurateurs are adopting the wait-and-watch approach. Anjan Chatterjee, founder and managing director of Speciality Restaurants that owns restaurant chains such as Mainland China and Oh! Calcutta feels the verdict is for a good cause as nobody wants drunk driving in the city. “However, having said that, there will be serious ramifications on the job market in the hospitality industry.” Some of his restaurants are located in Gurugram’s Cyber Hub and Sector 29 area, which are near the national highway that connects Delhi with Jaipur.

Zorawar Kalra, founder and managing director of Massive Restaurants which runs Farzi Café, Papaya and Masala Bar, concurs with Chatterjee’s views. “It’s a little early to comment right now, as the religious festival of Navratri (in North India) is going on. However, all the restaurants under Massive Restaurants are based around food but the lack of liquor is bound to have a detrimental effect, as a lot of our guests enjoy drinks with their food. The impact on the business can only be measured in the next few weeks, but the impact is going to be large,” he says.

That said, many in the liquor industry foresee other socio-economic fallouts due to the SC order. “From the main highways liquor retailers will start moving into the residential layouts that dot the highways, causing more harm to local residents in those areas. Bootlegging of alcohol on highways would be another cause of worry,” says a liquor retailer, on condition of anonymity.

In addition, “There are hotels on or near highways around airports, tourist destinations, industrial estates and major towns (eg. Gurugram) that contribute to the socio-economic growth of these areas,” says Arun Nanda, chairman and founder of Mahindra Holidays and Resorts and also head of the CII Committee on Hospitality.

(With inputs from Anshul Dhamija, Paramita Chatterjee and Samar Srivastava)