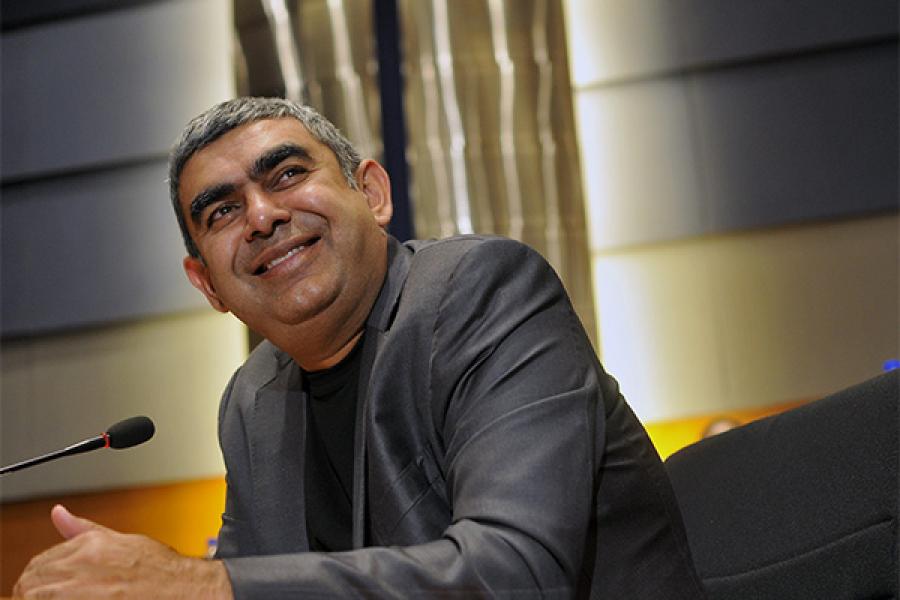 Infosys, India’s second-biggest software services provider by revenues, posted better-than-expected numbers for its fiscal second quarter, but slashed its forecast for the full year, joining rival TCS in expecting clients to spend less on their services in the near term.

The company cut its dollar-term revenues by as much as a third to 8-9 percent for the year ending March 31, 2017, from the 11.5-13.5 percent range it started the fiscal year with. In July, Infosys had already brought that down to 10.5-12 percent. These ranges are on a constant-currency basis, which eliminates exchange rate fluctuations.

“Considering our performance in the first half of the year and the near-term uncertain business outlook, we are revising our revenue guidance,” CEO Vishal Sikka said in a press release on Friday. “Longer-term, I  believe it’s increasingly clear that our industry’s future lies in evolving from a cost-based, people-only model, to one in which people are amplified by software and AI, and are free to innovate in areas that are strategic to our clients’ future.”

In dollar terms, which eliminate the effect of dollar-rupee exchange rate fluctuations, September-quarter sales rose by 8.2 percent to $2,587 million from $2,392 million a year ago, and 3.5 percent from June quarter’s $2,501 million. Constant currency sequential growth was nearly 4 percent.

The ICICI Securities analysts, however, did anticipate the big cut to Infosys’s forecast, when they wrote in a note on October 3 that the Bengaluru company might face challenges beyond the cancellation of a large project by Royal Bank of Scotland.

How Britain leaving the EU plays out in the coming quarters and the upcoming US elections are among the large external factors affecting the prospects of the Indian outsourcing sector. The rise of cloud computing is also decimating the traditional cheap-labour-based IT services model.

The top Indian IT companies are attempting to reposition themselves as providers of strong consulting and digital technologies-based solutions to help customers make more money, rather than just save costs. They are also trying to use automation and Artificial Intelligence (AI) to rewire their own operations as well as build new services around new products for their customers.

“If you think about the situation that our industry is in, we need to go through a dual transformation of the work that we do and what is happening in the world around us, and world of our clients,” Sikka said in a television broadcast, discussing the results and the forecast.

“Even the companies that manage to transform themselves through these times do it on the basis of an existing cash-cow business, by leveraging that to fund new areas, and we don’t have that in our industry,” he said. “The cash-cow business itself is the one that is under margin pressure.”

Cuts, delays and cancellations such as the one by RBS marred what was a fairly strong quarter for Infosys — one in which it won large contracts worth a total of $1.2 billion over the life of those contracts. The company also saw 80 basis points increase in its operating margins, helped in part by getting the utilisation to stay above 80 percent for the sixth quarter in a row, CFO Ranganath Mavinkere told reporters. Utilisation refers to the proportion of the company’s staff strength that did billable work during the quarter.

On Thursday, TCS reported its sales grew by a worse-than-expected 1 percent for the September quarter, after financial clients, its biggest, held back on spending, along with a fall in sales in the retail sector. Third-ranked Wipro reports its earnings on October 21.