The legendary singer, who passed away on Sunday, was second to none. Despite being blessed with a flawless voice and achieving greatness, she did not take her talent or stature for granted 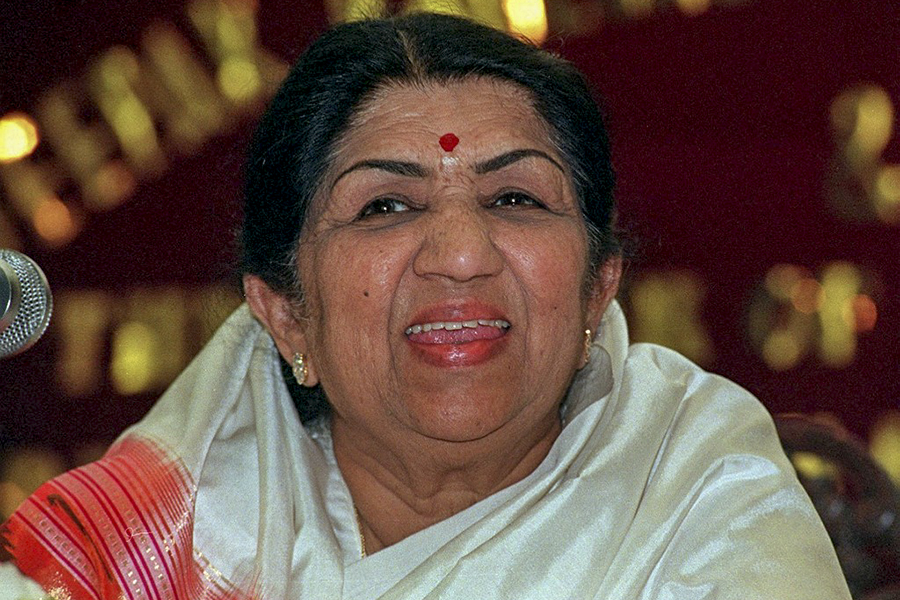 Despite being blessed with a flawless voice and achieving greatness, Lata Mangeshkar never took her talent or stature for granted
Image: Sebastian D'Souza / AFP

Lata Mangeshkar had often said that if given a choice, she wouldn't like to be reborn as Lata Mangeshkar. There's been a lot of pain, struggle and sadness in my life, and only I know about it, the Bharat Ratna would explain without revealing much.

Born to Deenanath Mangeshkar and Shevanti, the songstress had to shoulder the family’s responsibility since the age of 13 after her classical musician-and-theatre-actor-father passed away. As the financial crisis worsened with her father’s drama company facing closure, Mangeshkar took to acting in Marathi films like Pahili Mangalgaur (1942) to ensure her four siblings—Asha, Usha, Meena and Hridaynath—don’t have to sleep hungry. She detested the makeup, though, and often complained to her mother about her eyebrows being trimmed.

Master Vinayak, who had taken Mangeshkar under his wing, asked her to move to Mumbai and gave her acting and singing opportunities. Thus began her journey as a playback singer.

Her voice was initially dismissed as ‘thin’ by some, but music director Ghulam Haider who mentored her, showed immense faith in her abilities. He was eventually proved right.

Mangeshkar’s era began after the popularity of ‘Aayega Aanewala’ from Mahal (1949). She recalls facing a lot of interference during the recording of the song, rehearsals for which went on for days. To give effect to the line ‘Khamosh Hai Yeh Zamaana’—which she had to sing as if the actor was in a movie—Mangeshkar would stand at one end of the recording room with a mic in the middle. She would start singing from one corner and walk towards the mic to get the desired ‘echo’ effect.

Such commitment to her craft remained intact decades later too. At the age of 76, Mangeshkar flew to Chennai and rehearsed ‘Luka Chuppi’, the song from Rang de Basanti (2006), for four days. Ten years after its release, musical maestro AR Rahman revealed that the singer stood for eight hours to record the song.

During the initial days of her career, she had her share of naysayers too. Once, when she was travelling on a local train to a recording studio, music composer Anil Biswas introduced her to actor Dilip Kumar, saying she is an up-and-coming singer. “Yeh to Marathi hain. Inko Urdu kahan aati hai? (She is Maharashtrian… they don’t know Urdu),” he replied. Upset at the insult, she hired a tutor and learnt the language to ensure she gets her pronunciations right. Kumar and Mangeshkar, of course, shared a close bond later, with the latter even tying a rakhi to the actor on Raksha Bandhan.

Mangeshkar was a self-respecting individual. Once she took her younger sister Asha, who was a few months old, to school with her. When the headmaster scolded her for bringing a baby to class, she decided not to go to school ever. On another occasion, while recording a song, she had a small tiff with composer Sardar Malik. Without informing anyone, Mangeshkar left the studio. It was only when the others noticed that her sandals were missing that they realised she had gone home.

Despite being blessed with a flawless voice and achieving greatness, Mangeshkar never took her talent or stature for granted. Music meant everything to her and she treated the space where she sang like a place of worship. At every concert, she stepped on stage without footwear. During recordings, she would stand barefoot and record her song.

In a career spanning over seven decades, the Nightingale of India has sung innumerable songs, across languages, and given playback to actors from Madhubala to Madhuri Dixit, Nutan to Sridevi, Meena Kumari to Tabu, Waheeda Raman to Rani Mukerji. In fact, it is said that Madhubala, in her contract, would specify that “only Lata will sing for me”. Mangeshkar collaborated with almost every musical composer too—from Madan Mohan, RD Burman and SD Burman to AR Rahman. From gramophones to Walkmans, disc players, MP3 players and YouTube, her voice has been a constant.

As Mangeshkar went from strength to strength, she became second to none. Her equally illustrious sister, Asha Bhosle, was perhaps the only one who could match her. It is often alleged that the sisters did not let other singers flourish, but Mangeshkar had repeatedly dismissed such insinuations by saying that they were the best and the music directors only wanted them to sing their songs. She added that if they could establish themselves when there were other singers when they came into the industry, why couldn’t anyone else?

Among other things, she also received flak for her opposition to the Peddar Road flyover and her poor attendance in the Rajya Sabha where she was nominated as Member of Parliament. However, such criticisms pale in comparison to the impact Mangeshkar has had across generations. She has united India like no other with her soulful voice that can stir emotions in anyone. India’s first Prime Minister Pandit Jawaharlal Nehru was no exception, as he shed tears on stage when the singer sang ‘Aye Mere Watan Kay Logo’ in honour of Indian soldiers who lost their lives in the 1962 Indo-China war.

While she brought life to the words she sang, Mangeshkar herself found joy in cricket. When she was young, she would get passes from former India cricketer Polly Umrigar and watch cricket matches at Bombay Gymkhana, Brabourne Stadium and Parsee Gymkhana in Mumbai. She once revealed that she would take a holiday from recordings to watch India’s matches. She loved sarees and diamonds too. Movies remained an integral part of her life. As a child, she would sit on a pile of pillows and play Sant Tukaram after watching a movie on the life of the saint. And at other times, she would become Devdas with sister Meena playing Paro even though there was no one to play Chandramukhi.

Mangeshkar retained her childlike enthusiasm till the end by embracing social media platforms like Twitter and Instagram, and going on a nostalgia trip. During the start of her career, she would walk from Malad station to the recording studio instead of taking the horse cart to save money. As she breathed her last on Sunday, a sea of humanity walked along her mortal remains—a fitting tribute to a once-in-a-generation artiste who mesmerised people the world over with her mellifluous voice.

Tweets by @forbesindia
Timeline: The life and music of Lata Mangeshkar
Forbes India 30 Under 30: The dynamic, diverse young achievers