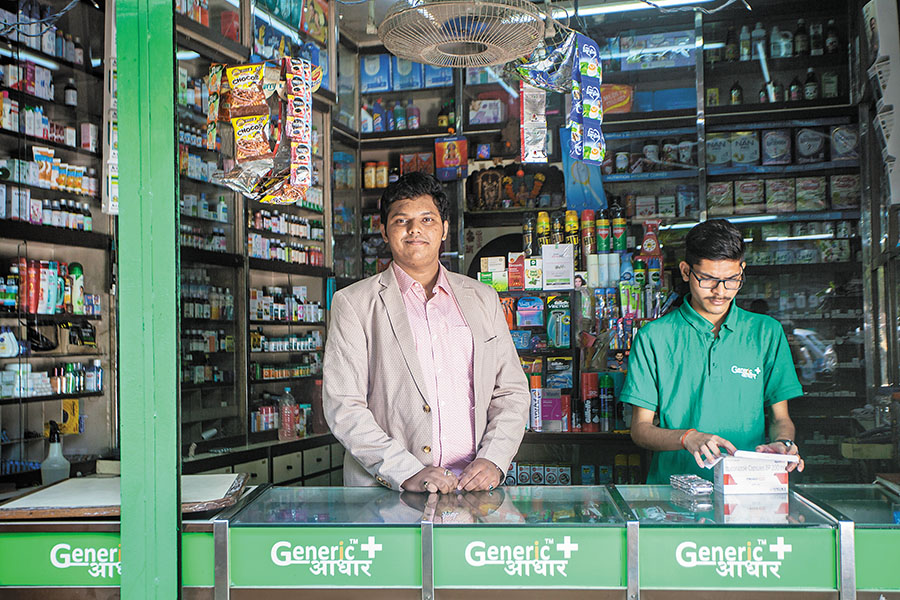 From manufacturers to the masses: Arjun Deshpande at a Generic Aadhaar store in Mumbai’s Mulund neighbourhood
Image: Aditi Tailang

At 17, chubby and pimply, Arjun Deshpande should be struggling to navigate adolescence, girlfriends and Instagram likes. Instead, he’s consumed by India’s decades-old pharma practices. “Generic medicines are marketed as branded medicines in India, so the customer ends up paying more. Such are the gimmicks played by big pharmaceuticals,” he says breathlessly, pulling out two strips of medicines from the pocket of his jeans.
One is Cipcal-500, a brand of calcium tablets marketed by Cipla, and the other is Shelcal, the exact same tablets sold by Torrent Pharma, in different packaging. “You can see for yourself, they are both the same,” says Deshpande holding out the strips in his palms. The fine print behind the Cipcal-500 strip, for instance, reads that the medicine has been manufactured by Uttarakhand-based Shivalik Remedies and marketed by Cipla. “Cipla isn’t making the drug, it’s just taking a generic, branding it and increasing the cost,” says Deshpande. “People get fooled into buying branded medicines and end up paying more. But medicines are not a luxury. They are a necessity. Everyone should have access to good quality, affordable medicines.” To solve this, Deshpande founded Generic Aadhar in early 2019. But his ‘aha moment’ came much earlier when he was 14 and on a summer break. He tagged along with his mother, who works at Mumbai-based Concept Pharma, on a series of trips to the US, Dubai, China and Vietnam to visit trade fairs. It soon struck him that these countries imported generics from India and made those medicines available to the masses at affordable rates. “Why is this not the case in India when we are the manufacturing hub of the world for pharmaceuticals, I asked my mother,” recalls Deshpande. She told him how generics were packaged and sold as branded medicines back home. Deshpande returned to Mumbai determined to change things around. Over the next few years, he spent time understanding the trade, meeting industry insiders and hatching a business plan. All this alongside his regular school work at DAV Public School in Thane, Mumbai’s neighbouring district. The precocious teen found that 60 percent of Indians didn’t have access to the medicines they needed because of the high cost, brick-and-mortar stores were struggling thanks to the growing popularity of online pharmacies, and branded medicines, besides being more expensive for the end-customer, were also not profitable for retailers: Margins on them were 5 to 10 percent versus the 30 to 40 percent margins that generics offered. With ₹5 lakh in seed capital from his parents, Deshpande reached out to manufacturers with WHO and GMP-approved facilities and convinced them to sell generic medicines directly to retailers. At the other end, he bandied together single-owner medical stores who were anyway reeling from the loss of business to online pharmacies. He aggregated the stores under the name Generic Aadhar, complete with a fresh logo, look and branding. Through these stores generics are sold directly to the end customer. Deshpande has got four Maharashtra-based manufacturers on board at present and has franchisee agreements with 11 medical stores spread across Mumbai and Thane. Two-three Generic Aadhar employees are assigned to each store to educate customers about generic medicines. Says Ashok Kulkarni, a 76-year-old diabetes patient and a regular at one of Generic Aadhar’s stores in Mulund, “I used to worry whether the quality of generics would be the same as the [branded] medicines I used to buy. The staff here assured me that it was. They asked me to try generic medicines once and see what happens. I did so and realised they had the same effect. Now I only buy generic medicines. My monthly medical bill has come down by 50 percent as a result.” As for store owner Vishal Thakkar, 46, joining hands with Generic Aadhar made business sense. Having owned the store for a little over two decades, he was initially sceptical about taking on a new brand identity. But after due thought he went ahead with Deshpande’s proposal and hasn’t looked back since. While the store also sells branded medicines, sales of generics have jumped, he says. “Sales have definitely improved,” he quips, without letting on how much they have climbed. In Deshpande’s estimate, most store owners have seen revenues double since tying up with Generic Aadhar. It’s what has led medical store owners from across India to reach out to Deshpande for a franchise partnership, says the teenager. Over the next three months, Generic Aadhar will have 35 to 40 retailers under its fold, mostly in Mumbai but some also in Goa and Gujarat. “We’re expanding systematically,” says Deshpande, adding that he’s on the lookout for outside capital and is in talks with a strategic investor. In the pipeline is also a foray into online sales where customers can directly order the medicines they need; it will be delivered to them “within two hours” from the nearest franchisee store through a third-part logistics player, explains Deshpande.  The opportunity is massive. There are 1 lakh manufacturers and around 10 lakh brick-and-mortar medical stores across India, says Deshpande, who has been shortlisted for the 2020 Thiel Fellowship in Silicon Valley, which has Oyo’s Ritesh Agarwal among its alumni. “It’s a win-win model for everyone: The manufacturers benefit, retailers get higher margins, and customers get lower prices,” he says. Generic Aadhar also benefits from the zero-investment, asset-light model. It has a profit sharing agreement with its franchisees where the startup pockets a cool 15 percent. Already Generic Aadhar has clocked around ₹40 lakh in revenue. So how much do Deshpande’s parents help him in his venture? “They have their own work,” he says, “but of course they are always there if I need any help or want to discuss something.” And how does he balance the demands of college work—he’s in class 12—with his business commitments? He flashes a grin. “I bunk lectures. I don’t let college come in the way of my education.”