The announcement came hours after Under Armour's Kevin Plank resigned as CEO. Nike's Parker will be replaced by ServiceNow's John Donahoe early next year

By Julie Creswell and Matthew Futterman 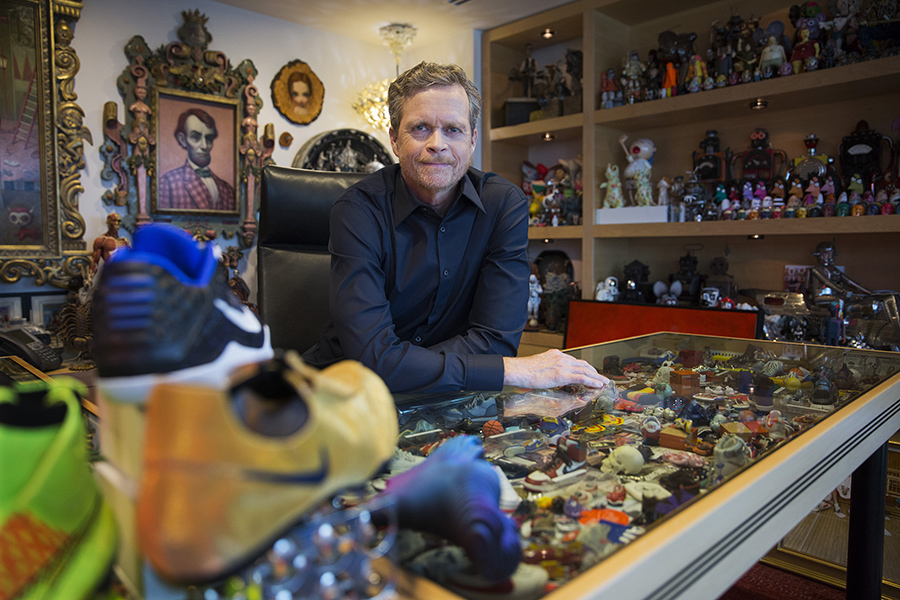 Mark Parker, Nike's chief executive, in his office at Nike headquarters in Portland, Ore., March 1, 2016. Parker will step down as chief executive at the beginning of 2020 and will become executive chairman of the sportswear company
Image: Ruth Fremson/The New York Times

Nike said Tuesday that its chief executive, Mark Parker, who led the company through a period of tremendous growth but also saw his leadership challenged by a number of controversies, would step down early next year.
He will be replaced by John Donahoe, a member of Nike’s board and the chief executive of ServiceNow, a cloud computing company. Previously, he was the chief executive of eBay. Nike said Parker would become executive chairman of the company Jan. 13, leading the board and working closely with Donohoe and the senior management team. “I am delighted John will join our team,” Parker said in a statement released by the company. “His expertise in digital commerce, technology, global strategy and leadership combined with his strong relationship with the brand, make him ideally suited to accelerate our digital transformation.” The news that Parker was stepping down as chief executive came as Nike’s stock price hit a high of more than $95 in trading Tuesday. The stock has nearly doubled in the past three years, reflecting Nike’s growth in key markets like China and its focus on selling directly to consumers, both online and in its own stores. For the year ending in May, Nike’s revenue grew by 7.5%, to $39.1 billion. The financial success has been tempered in recent years by a series of controversies inside the company. In September, emails emerged that showed Parker had direct knowledge of tests being conducted with performance-enhancing drugs by the company’s premier long-distance running coach, Alberto Salazar. According to emails contained in a decision in a case between the U.S. Anti-Doping Agency and Salazar, Parker and other top Nike officials were briefed on several occasions from 2009 to 2011 regarding medical experiments involving testosterone, a banned substance. The tests, the agency said, were an attempt to determine the effects of testosterone, how much of the substance could be used by athletes without it being detected, and whether an allowable amount of another substance, L-carnitine, could be used to benefit athletes. The agency barred Salazar from track and field for four years for violating anti-doping rules. As head coach of the Nike Oregon Project, a training group based at the company’s headquarters in Beaverton, Oregon, Salazar has worked with some of the world’s top distance runners. He denied any wrongdoing. Parker and Nike initially stood by Salazar and committed to funding his appeal of the punishment. A week later, however, Parker announced that Nike was shutting down the Oregon Project and cutting official ties with Salazar, although it said it would still finance his appeal. Shalane Flanagan, a Nike-sponsored runner who this week joined the coaching staff of another elite training group at Nike, said that she was not surprised by the activities cited in the agency report on Salazar but that she did not realize Parker had been aware of what was going on. “There must be some deeper layers to this that are over my head,” Flanagan said of Parker’s leaving as chief executive. Several current and former female Nike-sponsored runners came forward this year to say they had been forced to decide whether to risk financial penalties from the company if they became pregnant. Nike responded by changing its policy, waiving performance-pay reductions for pregnant athletes. In early 2018, a number of women inside the organization described the environment at Nike as a toxic boy’s club. They said their careers had been blunted, they felt marginalized in meetings, and they had endured other forms of sexual harassment and gender discrimination. As a result, Nike and Parker removed more than a dozen executives, both male and female. Those who left the company included Trevor Edwards, the president of the Nike brand who was widely seen at the time as a candidate to replace Parker.

KeJuan Wilkins, a spokesman for Nike, said Parker’s decision to step aside now was “absolutely not” a result of the Oregon Project controversy or any other issue. Rather, he said, it was part of a plan with the board that has been in the works for months to name a successor. Nike, seen by many as an insular organization that can be tough for outsiders to navigate, has looked outside the company before for leadership. The results were not reassuring. In late 2004, William Perez, the former head of S.C. Johnson & Son, the maker of Windex and Ziploc bags, was named chief executive. Over the next 13 months, Perez battled Nike’s founder and chairman, Philip Knight, for control of the company before Perez abruptly resigned. Parker was named his replacement. Wilkins said Donohoe’s experience and knowledge of the company would allow for a smooth transition. He has been on Nike’s board since 2014, working closely with Parker and other executives as the company has expanded its business overseas and online. Wilkins said Donohoe’s background at eBay and ServiceNow would be valuable as the company continued to expand its online offerings and sell more products directly to customers. The announcement of Parker’s impending move came on the same day that Under Armour said its founder and chief executive, Kevin Plank, would no longer oversee day-to-day operations, although he would remain the company’s executive chairman.