The multibillion-dollar takeover would enable SoftBank, which has already pumped billions into the company, to wrest control from Adam Neumann, WeWork's co-founder and former chief executive 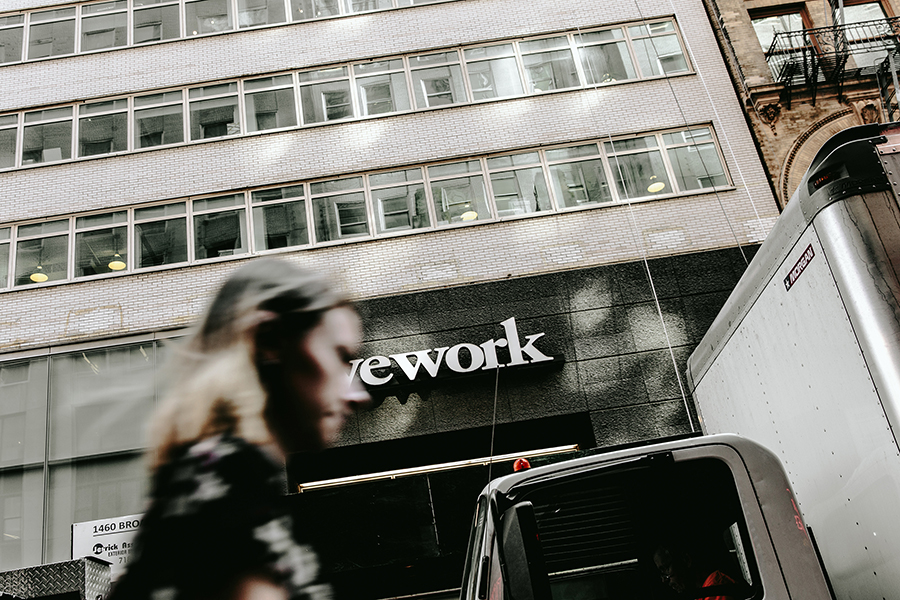 A WeWork location near New York's Times Square on Sept. 23, 2019. WeWork has agreed to be taken over by its largest outside investor, SoftBank, two people with knowledge of the matter said, in a deal that ends weeks of uncertainty for the troubled shared office space company
Image: Haruka Sakaguchi/The New York Times

WeWork said it was going to transform the market for office space, reinvent the way people work and elevate the world’s consciousness. But in recent weeks, the brutal reality beneath the lofty visions has emerged.
After failing to go public, the company was running out of money fast and needed a bailout. On Tuesday, WeWork’s largest outside investor, SoftBank, provided a last-ditch lifeline — a multibillion-dollar takeover that would enable it to wrest control from Adam Neumann, WeWork’s co-founder and former chief executive, three people with knowledge of the matter said. Even though Neumann’s hypergrowth strategy drove WeWork into the ground, he could walk away with $1 billion while giving up special voting rights and stepping down from the board. It’s a messy, costly turn to an audacious corporate experiment — one that tried to remake the stodgy old business of subletting office space into a cutting-edge technology play. WeWork’s descent highlights the dangers of throwing money at inexperienced chief executives who say they can upend long-established industries. “WeWork’s basic business model is nothing more than a real estate play,” said Vijay Govindarajan, a management professor at Dartmouth College’s Tuck School of Business in New Hampshire. “Let’s not fool ourselves by calling them a tech company.” Now, SoftBank, which had already poured billions into WeWork, will be pouring billions more in hopes of recovering its investment. The company’s business — leasing space, refurbishing it and renting it out to its “members” — is not profitable and may not be for the foreseeable future. SoftBank has a three-year plan to turn around the business and intends to install one of its own top managers, Marcelo Claure, who is also executive chairman of Sprint, as executive chairman of WeWork, two of the people said. Employees at WeWork are bracing for layoffs, and real estate experts say the company will have to significantly scale back its growth plans and possibly even give up some of the space it has leased in recent months for lack of paying customers. Just a few weeks earlier, WeWork had been planning to sell shares to stock investors in what its investment banks had billed as one of the biggest initial public offerings in recent years. But that share sale was scrapped after Wall Street investors balked at the company’s huge losses and unusual corporate structure, which gave Neuman outsize power. SoftBank’s takeover values WeWork at $7 billion, down from the $47 billion that SoftBank reckoned it was worth in January, these people said. The rescue package includes four main components. SoftBank will accelerate a $1.5 billion investment into WeWork that it had committed to making next year. SoftBank will buy up to $3 billion in shares from other investors in WeWork, including Neumann. SoftBank will also lend money to Neumann and hire him as a consultant. And SoftBank will lend up to $5 billion to WeWork. WeWork’s board chose the SoftBank deal over a $5 billion debt-financing offer from JPMorgan Chase. Given how much it has already plowed into the company, Softbank’s takeover will be successful only if WeWork is eventually sold or goes public at a valuation of $15 billion or more, these people said. Once the deal is complete, SoftBank will own about 80% of WeWork. A WeWork spokeswoman did not respond to requests for comment. WeWork is hardly the only SoftBank-backed company to run into trouble. SoftBank, led by Masayoshi Son, and its $100 billion Vision Fund have also invested heavily in Uber and Slack, whose share prices tumbled after they started trading on the stock market several months ago. For years now, Son has bet that pouring money into fast-growing startups would allow his chosen companies to grow faster than their rivals and establish dominant positions in their industries. But recently, Son seemed to be backing away from that approach, telling entrepreneurs at a corporate retreat last month that they needed to focus more on building sustainable businesses within a few years of going public.

SoftBank’s takeover of WeWork is its most expensive and expansive effort to rescue one of its investments, at a crucial time for the conglomerate: It is in the middle of raising a second Vision Fund. The big question now is whether SoftBank can turn WeWork into a sustainable business. The company’s most recent financial statements show that it has been burning through billions of dollars every year — and is close to running out of money. “The lesson here is, if you step outside of governance norms, you really need the numbers to back it up,” said Steven Davidoff Solomon, faculty director of the Berkeley Center for Law and Business at the University of California, Berkeley. SoftBank’s rescue plan has bought some time, analysts said, but WeWork still has to make some difficult decisions. “The silver lining in the whole process is that SoftBank bought them,” said Vicki Bryan, chief executive of Bond Angle, a research firm. Over the past several weeks, SoftBank executives have been developing a new business plan for WeWork, according to two people with knowledge of the plan. They are looking to sell and shut down unprofitable divisions and lay off employees — WeWork had more than 12,500 at the end of June. SoftBank also thinks WeWork should leave cities where SoftBank does not see a path to profits within three years and double down on cities, like New York and London, where it is already doing well. The plan to leave cities where it is struggling to earn profits makes sense. But that would mean walking away from leases, which would anger landlords who might refuse to do business with the company in the future or demand tougher terms. SoftBank could also cut the lavish commissions it has paid to brokers and seek to raise prices on the space it offers to bring in more revenue. But that could prompt corporate customers who have become accustomed to cheap rents to shop around for other spaces. WeWork’s main pitch to customers has been that it offers a more flexible way to rent office space than traditional landlords who required long-term leases. And there is plenty of demand for such space. The problem is that in the big cities that SoftBank seems to be focused on, many other companies, and building owners themselves, have gotten into the business, too. “The fundamental concept is there,” said Bill Aulet, a professor at the Massachusetts Institute of Technology’s Sloan School of Management. “But it went too far too fast.” Whatever happens to WeWork, SoftBank has already assured that Neumann will land on his feet. In an unusual move, SoftBank plans to give him a three-year loan of about $425 million to repay a credit line from JPMorgan, Credit Suisse and UBS that is secured by his shares in WeWork, which have dropped significantly in value. Neumann owns about 30% of the company and could sell up to $1 billion in shares to SoftBank. He is required to use at least $100 million of the proceeds to pay down his loan, the people said. Neumann will also give up special shares that have 10 votes each, back the deal, leave the WeWork board and become a consultant to SoftBank for four years, these people said. SoftBank will pay him $185 million for his advice, and Neumann will be barred from starting another company or poaching employees from WeWork.