By Natalie Kitroeff and David Gelles 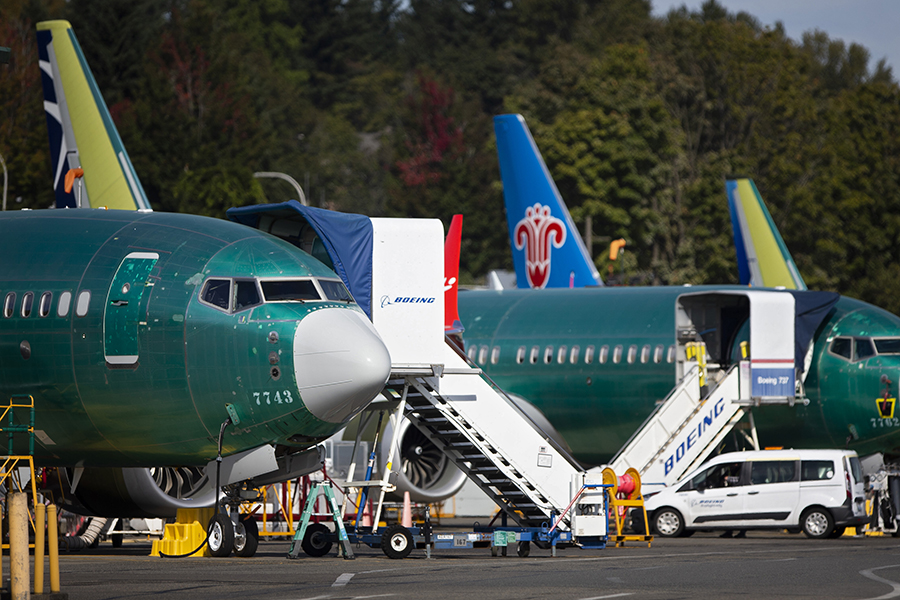 Boeing 737 Max airplanes at the municipal airport in Renton, Washington, Oct. 2, 2019. Even as Boeing inches closer to getting the 737 Max back in the air, new problems with the plane are emerging that go beyond the software that played a role in two deadly crashes. (Lindsey Wasson/The New York Times)

Even as Boeing inches closer to getting the 737 Max back in the air, new problems with the plane are emerging that go beyond the software that played a role in two deadly crashes.

As part of the work to return the Max to service, the company and regulators have scrutinized every aspect of the jet, uncovering new potential design flaws.

At the request of the Federal Aviation Administration, Boeing conducted an internal audit in December to determine whether it had accurately assessed the dangers of key systems given new assumptions about how long it might take pilots to respond to emergencies, according to a senior engineer at Boeing and three people familiar with the matter.

Among the most pressing issues discovered were previously unreported concerns with the wiring that helps control the tail of the Max.

The company is looking at whether two bundles of critical wiring are too close together and could cause a short circuit. A short in that area could lead to a crash if pilots did not respond correctly, the people said. Boeing is still trying to determine whether that scenario could actually occur on a flight and, if so, whether it will need to separate the wire bundles in the roughly 800 Max jets that have already been built. The company says that the fix, if needed, is relatively simple.

The company informed the FAA about the potential vulnerability last month, and Boeing’s new chief executive discussed possible changes to the wiring on an internal conference call last week, according to one of the people and the Boeing engineer, who spoke on the condition of anonymity to discuss internal deliberations.

The company may eventually need to look into whether the same problem exists on the 737 NG, the predecessor to the Max. There are currently about 6,800 of those planes in service.

The senior Boeing engineer said that finding such problems and fixing them was not unusual and not particular to the Max or to Boeing.

The emergence of new troubles with the Max threatens to extend a crisis that is consuming one of America’s most influential companies and disrupting the global aviation business. The Max has been grounded since March, after two crashes killed 346 people. The crashes were caused in part by new software on the Max, MCAS, which triggered erroneously and sent the planes into nose dives. Boeing has developed a fix for the software, but it has not yet been approved, and the process of returning the plane to service has taken much longer than Boeing expected.

The Max is Boeing’s most important plane, with about 5,000 ordered by airlines around the world. But as the grounding has dragged on, Boeing said it would temporarily shut down its 737 factory, jolting thousands of suppliers and stoking the concern of President Donald Trump.

Boeing abruptly fired its chief executive late last month after he alienated the FAA and airline customers. His successor is now contending with the fallout, as Boeing’s share price has fallen by 21% and the company faces tens of billions of dollars in charges related to the grounding.

Regulators have suggested that the Max could be approved to fly again by the spring, a timetable that could still hold. The company says that even if it needs to fix the wiring issue, it would only take one to two hours per plane to separate the wiring bundles on the Max using a clamp.

“We are working closely with the FAA and other regulators on a robust and thorough certification process to ensure a safe and compliant design,” Gordon Johndroe, a Boeing spokesman, said in a statement. “We identified these issues as part of that rigorous process, and we are working with the FAA to perform the appropriate analysis. It would be premature to speculate as to whether this analysis will lead to any design changes.”

Investigations by international regulators into the cause of the two Max crashes determined that pilots of those flights did not respond as quickly or effectively as Boeing and the FAA, using accepted industry standards, presumed they would when designing and evaluating the MCAS software.

So in developing a software update for the Max, Boeing and the FAA recognized that the previous industry assumptions should be changed, and that they needed to consider what would happen if it took crews much longer to act in the face of emergencies.

Using that new set of assumptions about pilot reactions, Boeing discovered that if two wire bundles placed close together toward the rear of the plane caused an electrical short, it could lead to a catastrophic accident. The wiring connects to the motor that controls the stabilizer, the horizontal fin on a plane’s tail, sending signals from the flight control computer that can push the nose down or lift it up.

If pilots did not recognize the problem and quickly take appropriate action, the plane could go into a nose dive, the senior Boeing engineer said. Under those circumstances, a short could bring a plane down in the same way that the MCAS software did on both doomed flights, forcing the stabilizer’s motor to run uncontrollably.

Boeing is still working to determine how likely it is that the wires could actually short circuit. The company does not want to make changes to the plane’s wiring if it doesn't have to, fearing that additional damage could be done during a repair.

The engines on the Max have also become a focus of scrutiny for regulators. CFM International, the joint venture between General Electric and Safran that manufactures the engines, has told the FAA it discovered a possible weakness in one of the engines’ rotors, which could cause the part to shatter. The likelihood of that failure is remote and regulators are not requiring an immediate fix, though they are looking to require that airlines inspect as many Max engines as possible before the plane returns to service, an FAA official said.

Boeing also recently told the FAA that it had discovered a manufacturing problem that left the plane’s engines vulnerable to a lightning strike.

While assembling the Max, workers at Boeing’s Renton factory had ground down the outer shell of a panel that sits atop the engine housing in an effort to ensure a better fit into the plane. In doing so, they inadvertently removed the coating that insulates the panel from a lightning strike, taking away a crucial protection for the fuel tank and fuel lines. The FAA is developing a directive that will require the company to restore lightning protection to the engine panel and Boeing is already in the process of resolving the issue.

“The FAA and Boeing are analyzing certain findings from a recent review of the proposed modifications to the Boeing 737 MAX,” an FAA spokesman, Lynn Lunsford, said in a statement. “As part of its continuing oversight, the agency will ensure that all safety related issues identified during this process are addressed before the aircraft is approved for return to passenger service.”

The new issues pose additional challenges for Boeing’s leadership. Late last month, the company’s board fired chief executive Dennis Muilenburg. He is being replaced on an interim basis by Greg Smith, the former chief financial officer. Next week, David Calhoun, until recently the nonexecutive chairman of Boeing’s board, will take over as chief executive.

On an internal conference call last Thursday, the question of changing the wiring on the Max came up, according to the senior Boeing engineer and another person familiar with the matter. At one point, a Boeing employee asked about whether the fix would need to be made to every plane in the fleet if the issue was found to be low risk. Smith replied that if changes were needed, they would have to be comprehensive.

Smith’s sober response served as an immediate contrast to Muilenburg, who repeatedly made overly optimistic projections about what was needed to get the Max back into service.

Boeing was already confronting a number of problems with the 737 Max and its predecessor.

In recent simulator tests with crews from American, Southwest and United Airlines and Aeromexico, many pilots did not use the prescribed emergency procedures to handle problems with the flights, raising the possibility that regulators could mandate flight simulator training or change the procedures before clearing the plane to fly. The FAA is evaluating Boeing’s analysis of the testing.

Still, there are signs that Boeing is making progress toward getting the Max flying again. Regulators from Europe plan to fly to Seattle this week to test the new software in a flight simulator, a sign that international authorities believe the company is far enough along that its fix is ready for serious evaluation, according to two people familiar with the matter.

Government officials believe that plane may be cleared for a certification test flight as soon as this month, where the company must demonstrate the plane meets all the safety requirements. The flight — the regulator’s final exam for the Max — is a significant milestone and one of the last hurdles the company needs to clear for regulators to lift the grounding.

American Airlines and Southwest Airlines are currently planning to use the Max for commercial flights in April, while United Airlines has scheduled Max flights for June.

“Our highest priority is ensuring the 737 Max meets all safety and regulatory requirements before it returns to service,” Johndroe said.