'Tech-led startups have over $100 bln in market cap' 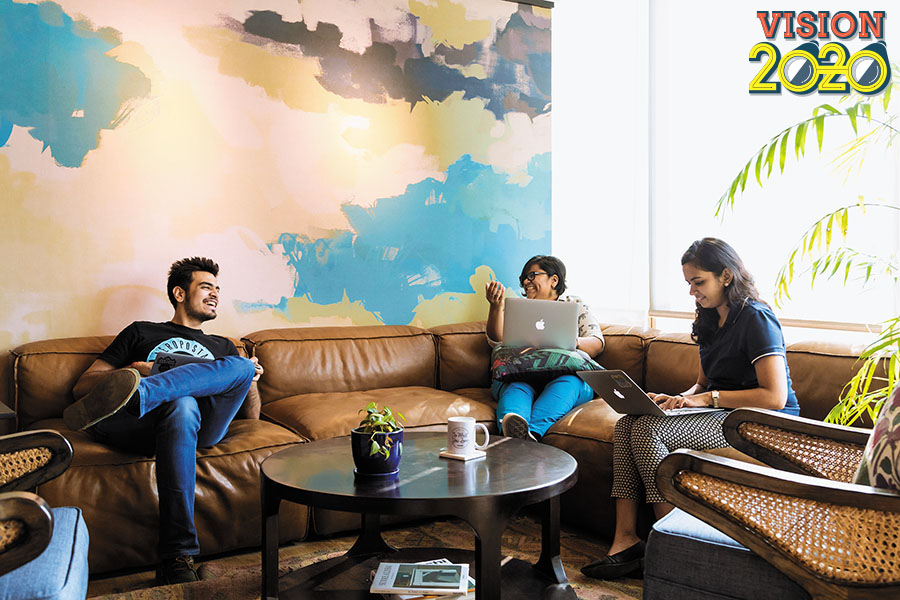 In the last 10 years, India has produced technology-led startups that have changed how Indian consumers and businesses discover, buy and consume products and services digitally. These startups have scaled rapidly and over these 10 years have created a market capitalisation of over $100 billion. For perspective, that’s a cohort that has created economic value comparable to 4 percent of India’s GDP.

The valuation of these startups combined would have been a couple of billion dollars a decade ago. Such wealth creation is extraordinary, if not unparalleled in Indian history. This achievement is outstanding not just in terms of convenience to consumers/enterprises but also in terms of metrics such as jobs created, employee wealth, increased infrastructure creation, government tax revenues and FDI inflow, and profitability improvement in the Indian industry.

This is the 15th year of operations in India by Accel (including its predecessor Erasmic Venture Fund). When we started with our first fund in 2005, mobile phones and the internet were just starting off in India—only one in 50 Indians had access to the internet. Three years later in 2008, when we raised our second fund, the number of Indians with access to the internet had doubled to 52.5 million, many of them still going online only from their offices.

In contrast to peer economies that relied on export-led growth, domestic consumption would prove to be the key driver for the Indian economy. That coupled with India’s young population (the median age was 24 years in 2011), the largest in the world, translated into an immense opportunity to partner with local entrepreneurs who were both familiar with the needs of the Indian market as also localised global solutions to suit India better.

While consumer internet was spreading its wings, India also moved into a higher gear across the enterprise segment. Our early bet was that the wave of software services companies of the 1990s and the early 2000s would give way to service platforms. Software as a service (SaaS) companies serving global markets from India proved to be a fast-emerging category; more on this later.

Between 2009 and today, the number of internet users grew 10-fold. India can now digitally identify 1.3 billion people, has 600 million internet users and 150 million online transacting customers, a national payments platform that processes $20 billion a month, and an indirect tax network designed to scale with minimum leakages—all adding up to a globally unmatched digital infrastructure.

This will undoubtedly be fertile ground for a thriving tech entrepreneurial ecosystem in the years ahead.

There are a few salient trends worth calling out from the last 10 years that will play out well for India in the next 10.

1) Founder quality: Two decades ago, entrepreneurship was low on the pecking order of career options and we had an even smaller set of entrepreneurs who understood how to create product-driven companies at scale. Many founders today are well-prepared having worked at successful startups—in some cases, having watched other founders at close quarters scaling a business. Parents no longer baulk at conversations around their kids starting up. Entrepreneurship is now the ‘cool thing’ to do and conversations of starting up happen as soon as someone enters college.

Also, startups are no more restricted to India’s metros: We are starting to see founders from Pune, Mysuru, Coimbatore, Thiruvananthapuram, and many small towns.

2) Fast-paced scaling: Mass scale digital consumption in the last 10 years has increased the ‘speed to scale’ for startups. Taking examples from our portfolio: Our seed round in Swiggy was $1 million when they were doing approximately 100 deliveries per day. Today, just four-and-a-half years on, Swiggy handles well in excess of 1 million orders daily and is valued at $3.4 billion. When we signed up as seed investors at Freshworks in 2011, SaaS from India was hardly heard of and our first cheque of $1 million was written out to a company with six employees. Today, it has about 2,500 employees and is valued at $3.5 billion. The story of Flipkart, of course, surpasses them all: An $800,000 investment in 2009 and a $21-billion acquisition by Walmart 10 years on. We have also seen this hyper-growth pattern in the local services marketplace (UrbanClap, funded in 2015) and B2B logistics (BlackBuck, 2015).

3) All-pervasive tech: We have seen a deep and wide spread of India’s tech startup boom in sectors such as ticketing, ecommerce, fintech, mobility, foodtech, logistics, healthtech, among others, in the 2010s. Early steps have been taken towards innovation in other sectors such as agritech, education, insurance, real estate, renewable energy, IoT, automation, electric mobility, deep tech, and manufacturing.

The biggest trend among old economy companies that we are witness to, however, is in the aggregation and disintermediation of supply chains using tech-led marketplaces like IndiaMART, Udaan, Ninjacart, Zetwerk, BlackBuck (the last three are from the Accel portfolio). These marketplaces have enabled supplier discovery, project management, and pricing transparency. These platforms promise millions of SMBs affordable, cutting-edge tech to improve their productivity and profitability—in turn delivering a massive multiplier effect on job creation and the overall economy.

4) On cloud nine: One sector that requires special mention for how it has grown in the 2010s is SaaS. We consider ourselves lucky to have partnered with companies such as Freshworks, CleverTap, BrowserStack, MindTickle, Zinier, Zenoti, and several others. SaaS founders and investments are becoming mainstream—almost every India fund is now aligned to this opportunity and larger global funds are trying to double down into the mature SaaS companies.

And why is this worth calling out? Because we believe we are in the middle of a perfect storm for creating SaaS businesses anywhere in the world. Globally, enterprises are choosing the best product independent of where it is built. With founders in India having a better understanding of global enterprises, they are creating world-class products and delivering them at a significantly lower cost than what it would take for equivalent startups in the Bay Area. Startups with both horizontal and vertical offerings are capturing this fast-growing, multi-billion dollar SaaS export opportunity before India. The momentum is such that SaaS will take far less time than the 40 years that India took to reach $150 billion of software service revenues.

In conclusion, the last 10 years have placed India on a strong position for growth in the tech startup ecosystem. India has a strong and robust digital infrastructure in place, has demonstrated early scale-up successes and depth of founder abilities, and has returned VC money in multiples. This promises exciting times in the decades ahead.