Prime Minister Narendra Modi: In for the long haul

Eschewing short-term measures and bold decision-making have been the hallmarks of this government's tenure. But a lot more still needs to be done 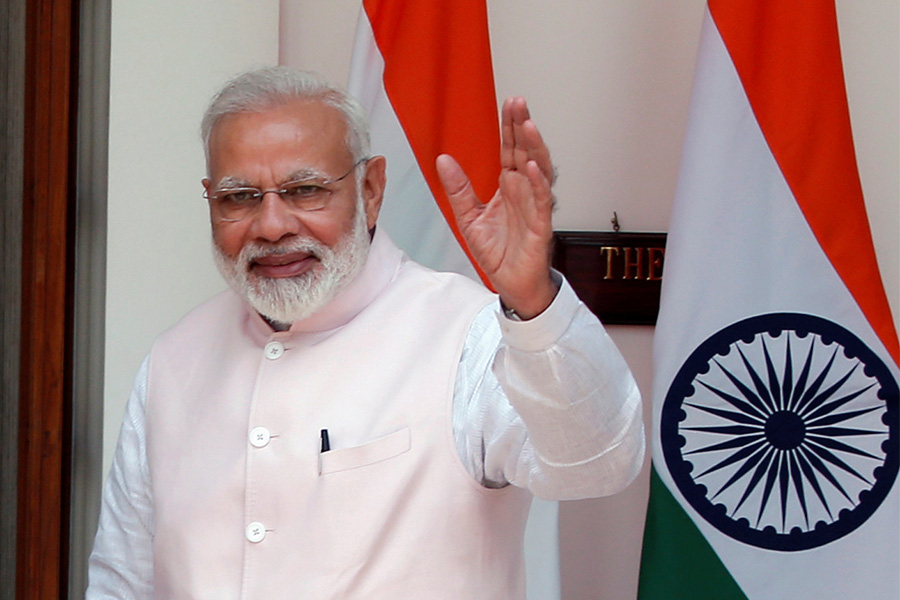 PM Narendra Modi has taken the bull by its horns when it comes to issues like black money. However, bottlenecks that thwart growth still remain
Image: Adnan Abidi / Reuters (For illustrative purposes only)
“I assure you that when we meet in 2019, I will place before you my report card. I will try and achieve the pinnacle of perseverance and hard work,” said Narendra Modi to BJP (Bharatiya Janata Party) Parliamentary Party members at the Central Hall of Parliament. It was May 20, 2014, and he had just been elected the leader of the BJP Parliamentary Party, a position that paved the way for him to become the Prime Minister (PM) of India a week later.

Three years on, that report card is largely a work-in-progress. The economy is yet to gather enough pace to usher in achhe din to all segments of society. Various bottlenecks—be it infrastructure shortcomings, worrying level of stressed assets in the banking system or lack of ease in doing business in India—that thwart rapid economic growth mostly remain. “But that does not mean that the government has neglected taking on these challenges,” says DK Joshi, chief economist, Crisil. In the last 1,000 days, the Modi government has shown a penchant for taking bold decisions to tackle some of the deep-rooted problems faced by the economy. “Durable solutions are not easy and it will take time,” says Joshi. “The government is moving in the right direction.”

Take the case of the power sector. While previous governments focussed on augmenting power-generation capacity, the Modi government has chosen to tackle the weakest link in the supply chain—the distribution companies whose deteriorating finances threaten to collapse the entire sector. The government’s Ujwal Discom Assurance Yojana (UDAY), which seeks to bring about a financial turnaround for, and operational improvement in, power distribution companies was initially received with a large dose of scepticism. But today, 27 of the 29 states in the country have signed on for it. According to the Union ministry of power, this scheme has helped power distribution companies save interest to the tune of Rs 11,989 crore and reduced their revenue losses by 60 percent so far.

Bad debts is another problem that the government had inherited. Stressed assets, at 16.6 percent of the overall advances, are choking the economy of funds and leaving the banks, especially those that are government-owned, in a precarious financial position. While the alarm was raised years ago, no enabling policy to combat it was put in place. That changed with the recent NPA Ordinance. “It offers a big shift when it comes to dealing with stressed assets,” says Mukesh Butani, managing partner, BMR Legal. “This, coupled with the bankruptcy law, will ensure that, over a period of time, the country will have better governed banking and corporate sectors,” he says.

The prime minister’s biggest move so far has been the demonetisation of high-value (Rs 500 and Rs 1,000) notes. Black money, a parallel economy and poor tax compliance have been every government’s burden to carry. While each of the previous governments took incremental steps to deal with these issues, Modi chose to take this bull by its horns and demonetised 86 percent of the currency in circulation.

While this move created initial pain and slowed economic growth (to 7.1 percent of GDP in 2016-17 from the previous year’s 7.9 percent), the benefits are beginning to emerge. Tax compliance is rising. In 2016-17, 9.1 million new taxpayers have been added. Through the Goods & Services Tax (India’s largest indirect tax reform that will be rolled out shortly), demonetisation and thrust on digital payments, the government plans to broaden the formal economy which should mean higher tax revenues and, eventually, lower tax rates.

Other key decisions include the establishment of an institutional framework for inflation management, a monetary policy committee to determine interest rates and better subsidy management through direct benefit transfer which now needs to be expanded.

There are two years remaining in Modi’s maiden term as PM and the government has plenty left to achieve. Its attempts at kick-starting languishing private sector investment, a key driver of economic growth, has not worked thus far. Exports have shown signs of revival recently, but many economists argue that the structural problems which inhibited its performance persist and the growth is more of a statistical base effect. Without these two engines of growth, a strong economic performance is unlikely. The other concern is the ‘job-less growth’ that the country is experiencing. Economists such as HSBC’s Pranjul Bhandari have estimated that over the next 10 years, India needs to create 80 million jobs. If it is business as usual, there will be a shortfall of 24 million jobs. The government needs to think out-of-the-box to bridge this gap.

While the fiscal discipline of the central government has been noteworthy, the same cannot be said about the states. A recent study of state finances by HSBC India paints a startling picture.

“State deficits have been ballooning, undoing much of the consolidation done by the Centre,” it says. Borrowing by states is crowding out the private sector and keeping interest rates high.

If there is one area the government has chosen to lie low about, it is divestment. It has opted for the easier route of buy-backs and the sale of SUUTI (Specified Undertaking of Unit Trust of India) assets to meet the divestment target.

Another criticism the government faces is that the zeal it shows in launching schemes is not matched by implementation. Its flagship programmes such as Start-up India and Make in India have seen a slowing in impetus. “Implementation at the ground level is not the same,” agrees Butani.

If Modi has to present a strong report card and, more importantly, head into the 2019 elections with a groundswell of support on the back of strong economic growth, the gaps in the government’s efforts need to be filled.