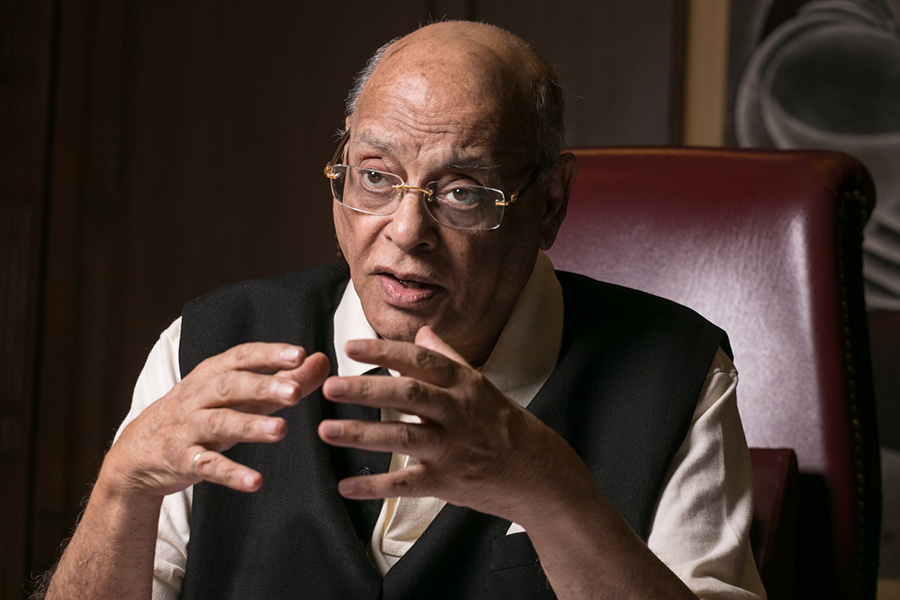 As the patriarch of the Nanda family, Rajan held the distinction of bringing together two of Indian cinema's biggest powerhouses: the Kapoor family and the Bachchans. Rajan is married to Ritu, daughter of India’s legendary filmmaker, Raj Kapoor, and sister to film stars, Rishi, Randhir and Rajiv Kapoor, while his son, Nikhil Nanda is married to India’s biggest film icon, Amitabh Bachchan’s daughter, Shweta Bachchan.

On Sunday night, both Amitabh Bachchan and Rishi Kapoor took to Twitter to announce the passing of Nanda, also one of India’s tallest business leaders. Nanda, 76, has been the chairman of Escorts since 1994 and passed away in Gurugram after a brief illness.

“A committed philanthropist, visionary Mr. Rajan Nanda will always be remembered for his vision of sound business governance, acumen and value driven management practices,” Escorts Ltd. said in a statement.

Nanda, whose father HP Nanda started the Escorts group, after migrating from Lahore (modern day Pakistan) to New Delhi during partition, was among those rare businessmen who saw their fortunes burgeon, wane and eventually rebound during their lifetime. That’s because, much before India decided to liberalise its economy in 1991, the Escorts family was a manufacturing powerhouse, producing everything from tractors, pistons, railway equipment, JCBs and motorcycles under a protectionist regime.

The company manufactured the popular Rajdoot motorcycles, and launched Yamaha bikes in India, in partnership with Yamaha, Japan. It also ran the renowned Escorts Heart Institute in New Delhi and dabbled in telecom.

“This company started as an agency house and the promoters of the company were very good with people,” Nanda told Forbes India in March this year. “They made political relationships and all the decision making and capital making was all political and not commercial. They got well connected and got into startup businesses.”

But the past three decades were particularly tumultous for Nanda. Many of Escorts’s joint venture partners exited their businesses since they found little use for Indian companies under the new economic regime. The group also met with intense competition from many Indian and foreign companies, that had begun to flock to the Indian shores. For instance, once the largest tractor maker in India, Escorts trail far behind Mahindra group and TAFE in tractor sales now, even though the company has firmed up plans to expand into newer businesses.

“We’ve done various domains in the past,” Nanda told us in March this year. “I see this company as an engineering capability. I am not saying we can’t do anything else but that will be based on the commerce that we find. But I certainly want India and Escorts to become engineering-capable. What we have achieved is outstanding and even I find it hard to believe.”

Today, the Escorts group has revenues in excess of Rs 5,000 crore, while profits stood at Rs 344 crore in FY18. Over the past five years, the company’s profits have seen a turnaround, growing nearly four times.

For Nanda, who joined Escorts in 1965 at the age of 23, before taking over the group in 1994, life had certainly come a full cycle. Would he have wanted Escorts to do more? “Between all three divisions, we have our hands full,” Nanda had said in March. “You fill your hands with what you can embrace. I like excellence and quality. I’d like to say that we’ve not made money, we’ve earned respect as a company. I could go anywhere, I get respect because we’ve given the company all the well-being it has.”

Tweets by @forbesindia
Internet Saathi: Improving digital literacy among women
Leaders of the future will need to be socially aware, and entrepreneurial: Seán Meehan