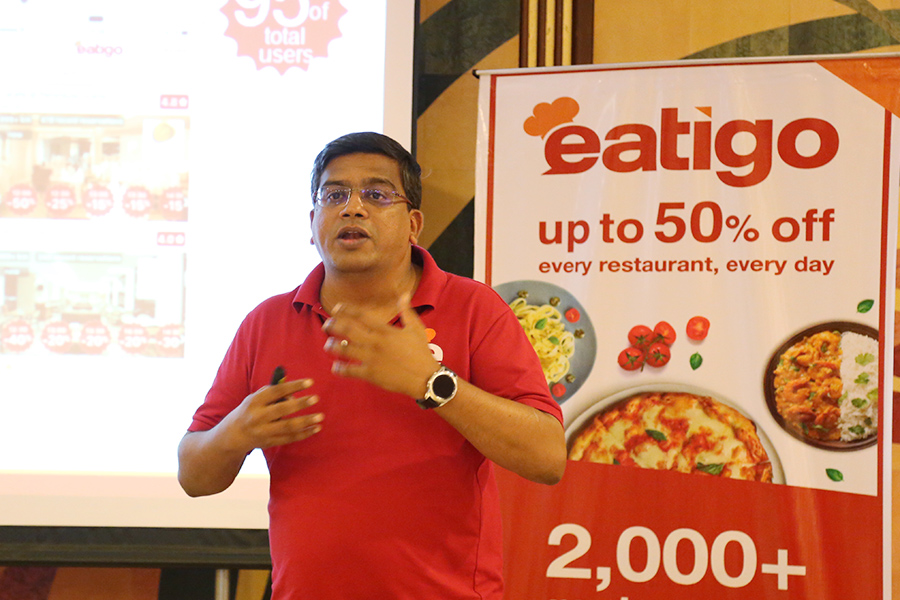 
Restaurant reservation platform Eatigo, which offers time-based discounts of up to 50 percent in restaurants across Thailand, Singapore, Hong Kong, the Philippines and Malaysia, on Thursday announced that the service would be available to users in both Mumbai and Pune.The Bangkok-headquartered company has partnered with 300 restaurant partners in the Indian cities, including upscale hotels such as the Grand Hyatt and Renaissance Mumbai, as well as popular food chains like Pizza Hut. Users can use the Eatigo website or mobile app to reserve a table and avail of discounts of up to 50 percent.“We’re connecting users to merchants, and doing everything in real time,” says co-founder and CFO Siddhanta Kothari at a press conference in Mumbai. The service differs from other online reservation platforms like Zomato and DineOut in that it offers time-based discounts, which means that the discount offered varies depending on the time at which users choose to dine at the restaurant. Off-peak hours attract greater discounts, as it lets restaurants fill up their otherwise empty seats, while peak hours attract lesser discounts. However, a minimum discount of 10 percent would be guaranteed, Kothari explained.“Restaurants are happy to partner with us because they are able to drive incremental profitability by filling previously empty tables during off-peak times,” says Kothari. Eatigo, in turn, charges the restaurant a licence fee for the use of its service.Even though India does not have a “culture of reservation”, in that it is more of a “walk-in market”, Kothari says the discounts would serve as an incentive for Indians to make reservations. “People may not reserve for the sake of reserving, but they will for the discounts,” he says.Eatigo plans to rope in 700-1,000 restaurant partners across Mumbai and Pune by the end of the year, and based on its experience in other cities across Asia, hopes to breakeven in India in the next 12-18 months. “This will not be a two-city play. We will look to expand pan-India once we have developed Mumbai and Pune,” adds Kothari.As part of its India foray, Eatigo acquired the operations of Ressy, an Indian online reservation platform, in April this year. “Ressy’s operations complement our existing business model. Its strong operations team, with its extensive knowledge of the local landscape will open up a lot of opportunities that will help us not only increase our visibility, but also expand our position as a strong market leader,” Michael Cluzel, co-founder and CEO, said in a statement.

Backed by TripAdvisor, Eatigo has raised $15.5 million in funding so far. Founded in 2013 by Cluzel, Kothari and two others, Eatigo claims to have seated over five million diners at more than 2,000 restaurants across the Southeast Asia region.