The revolt in India underscores how tense the relationship between restaurants and the dining apps has become. Restaurateurs and delivery workers around the world are questioning the small share of the pie they get from powerful gatekeepers like Zomato in India, GrubHub and DoorDash in the United States, and Deliveroo in Europe

By Vindu Goel and Ayesha Venkataraman 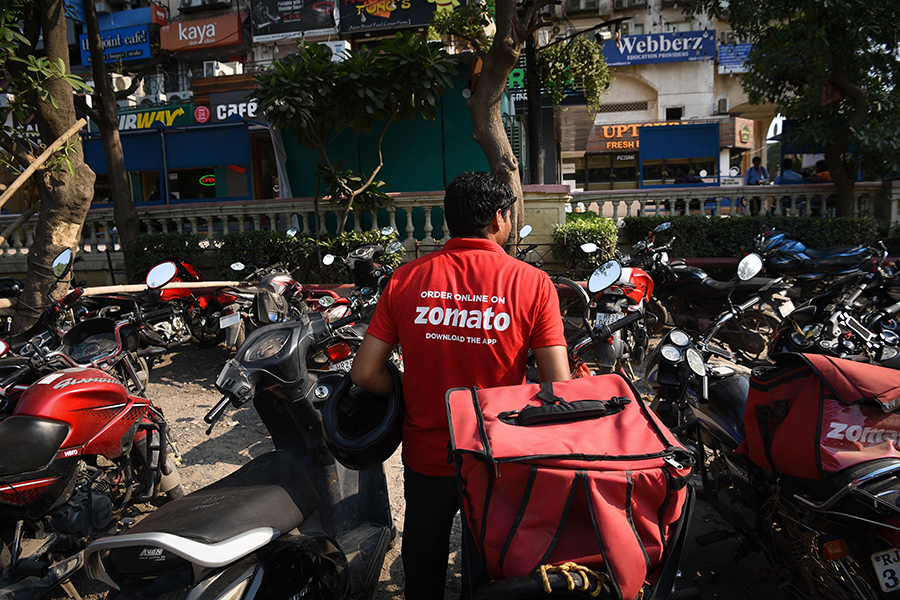 A Zomato delivery agent parks his bike before collecting a delivery order at a restaurant in the Galleria Market in Gurugram, India, a New Delhi suburb home to many tech companies including Zomato, on Aug. 27, 2019. Frustrated by the steep commissions and discounts that apps like Zomato and Uber Eats push on restaurants, thousands have started a movement to #Logout from them. (Sahiba Chawdhary/The New York Times)

MUMBAI, India — Aakanksha Porwal, owner of a small retro diner called Vahnilla & Company, recently signed up for the Zomato food delivery app to make dishes like her veggie cheeseburgers and Kit Kat cakesicles available to a wider audience. She also joined Zomato’s Gold program, where she would offer two dishes for the price of one to members who came to dine in person.

The goal was to help expand her nascent business. But three months and 150 free dishes later, Porwal has grown disillusioned.

The free food has cost her about 20% of her revenue, on top of a Zomato Gold sign-up fee of about $550, she said. Gold users, who pay about $14 for a year of buy-one-get-one-free dining at 6,000 restaurants, are often rude and demand extra discounts, she added. And Vahnilla pays Zomato a steep commission of 28% on every order that is delivered.

“Zomato is the greatest thing to happen to a customer,” Porwal said. “The consideration for restaurant owners is literally nothing.”

Now, in a collective primal scream, India’s restaurants are rebelling against Zomato and other leading dining apps.

Two weeks ago, a group of restaurant owners near New Delhi called for an end to the steep food discounts constantly offered by Zomato and competitors like Swiggy and Uber Eats. They argued that the costs fell on eateries while the apps reaped the rewards. The protest, which has drawn public support from thousands of eateries, has its own hashtag, #Logout. Many have either left the Gold program or pledged to do so.

“The consumer believes that a discount has been his right, not a privilege,” said the leader of the insurrection, Rahul Singh, who is the chief executive of the Beer Café restaurant chain and president of India’s National Restaurant Association. “But all of this is coming out of the restaurants’ pockets.”

The frustration goes beyond India. As food ordering and delivery increasingly move online, restaurateurs and delivery workers around the world are questioning the small share of the pie they get from powerful gatekeepers like Zomato in India, GrubHub and DoorDash in the United States, and Deliveroo in Europe.

The apps have made it easier for people to order takeout meals, and restaurants have gotten exposure to a larger audience of diners. But the platforms also charge hefty commissions on each order and can squeeze the profit margins of culinary establishments. In the United States, some restaurants have closed, unable to keep up with the cost of working with the delivery apps.

The revolt in India underscores how tense the relationship between restaurants and the dining apps has become. On Thursday, restaurateurs spent all day meeting with top executives of Zomato and Swiggy, another delivery app, but failed to settle their differences.

“The customer is addicted now,” Satish Meena, a senior forecast analyst in the New Delhi office of Forrester, a global tech research firm, said of the apps. “They have trained the customer that if there’s not a discount today, I’ll wait because tomorrow there will be another discount.”

The Indian food delivery apps said they provided a valuable and costly service that was underappreciated by their restaurant partners. But they are also making some changes in the face of the rebellion.

Shortly after the #Logout campaign began, Zomato’s chief executive, Deepinder Goyal, apologized on Twitter for the financial pain that “bargain hunters” had caused some restaurants. Last week, he sent an email to all of the Gold restaurants announcing 10 changes in response to their concerns, including a once-a-day limit and a doubling of the annual subscription price to about $25.

But he refused to end the program. Just the opposite: In an interview last Friday, Goyal said he intended to expand Zomato Gold to delivery. About 18,000 restaurants had already signed up, he said, and Zomato would soon test the idea with a small group of customers.

He argued that for many restaurants, the extra foot traffic from Gold was a vital source of business.

“Ninety percent of the restaurant base says, how can you get me more customers?” Goyal said. “At the end of the day, it’s the restaurant’s choice. Who is forcing you to be on Gold?”

Goyal said he understood why some restaurant owners felt that Zomato’s delivery commissions were unfair. But he noted that the cost for Zomato to process and deliver an order was about 65 rupees, or 91 cents, while the average order size in India was 235 rupees ($3.27).

That logic garners little sympathy from restaurateurs, who are coping with a general economic slowdown and higher prices for fruits and vegetables in places like Mumbai.

The restaurant owners said Zomato and Swiggy, which have together raised nearly $2 billion in funding, had decided to push discounts over everything else.

The home screens of both apps give top billing to whichever restaurants — usually big chains like Burger King or Domino’s Pizza — are offering the biggest deals that day.

“Sometimes with all the discounts, it’s cheaper for the customer to order online than cook at home,” said Anurag Katriar, who runs a group of European-style restaurants under the Indigo brand and heads the Mumbai chapter of the restaurant association. “For the aggregators, it’s the number of users and clicks that builds their value.”

Another sore point is customer data. Neither Zomato nor Swiggy shares customers’ names and phone numbers with the restaurant that fills the order, citing privacy concerns. Restaurant owners said that left them with no way to market directly or build long-term relationships with their best customers. 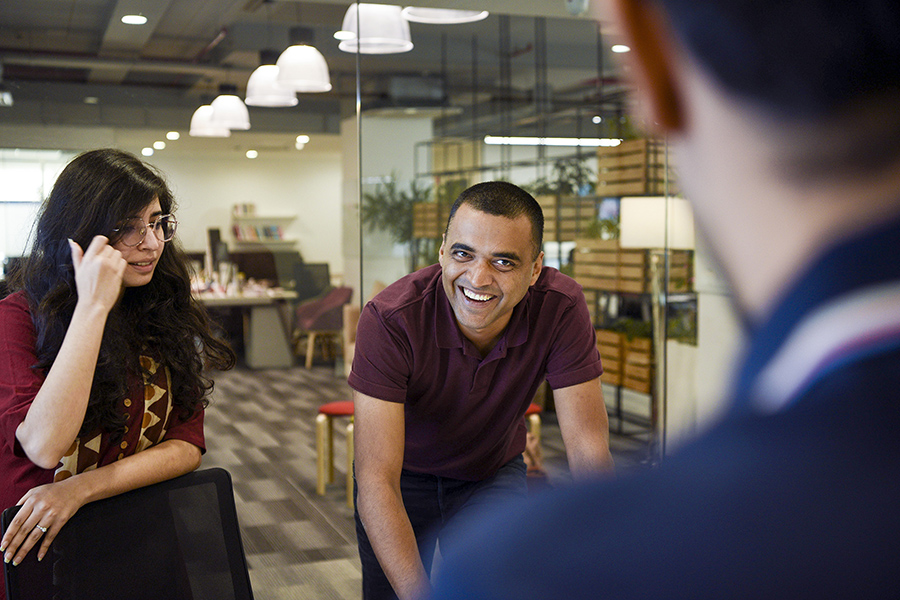 Deepinder Goyal, chief executive of Zomato, center, at the company’s headquarters in Gurugram, India, on Aug. 27, 2019. Frustrated by the steep commissions and discounts that apps like Zomato and Uber Eats push on restaurants, thousands have started a movement to #Logout from them. Goyal apologized for the financial strain the discount program put on some restaurants and announced changes, but refused to end the program. (Sahiba Chawdhary/The New York Times)

Zomato and Swiggy also keep cooking up promotions and programs to provide value to app users — often at the expense of the restaurants.

Zomato recently enrolled about 250 restaurants in an experiment called Infinity, in which people could eat as much as they wanted from a restaurant’s entire menu for a flat price. The ensuing gluttony was difficult for restaurants to manage and resulted in a lot of wasted food. Goyal said Zomato now planned to limit the unlimited dining to selected items like pancakes or dosas.

Swiggy, which is focused entirely on delivery, is beginning to compete directly with restaurant partners through its own brands, which make food in special, delivery-only “cloud kitchens.” The restaurant industry has asked India’s antitrust regulators to block the in-house brands. Swiggy declined to comment on the matter.

The frustrations came to a head Aug. 13, just before India’s Independence Day.

About 300 restaurant owners in Gurugram, a New Delhi suburb that is home to many tech companies, including Zomato, decided they were tired of losing money to patrons of Zomato Gold. They made a pact to pull out of Gold and other discount programs for a few days, saying that they wanted to “detox consumers from discount addiction.”

News of the protest went viral. Within days, more than 2,000 restaurants — from white-tablecloth establishments to neighborhood dosa shops — joined in. This week, the industry called for additional changes to the food delivery programs operated by the major players, including Uber Eats.

During meetings Thursday to discuss those requests, Swiggy said it would limit the frequency of discounts and look at ways to share the costs, according to Katriar, the Mumbai restaurant association head, who attended. But Zomato indicated that it would press forward with Goyal’s plan to expand Gold to delivery, which could further damage restaurant finances.

A Swiggy spokesman said the meeting had been “constructive and collaborative.” A Zomato spokeswoman did not respond to requests for comment

The protests have left Zomato struggling to find the right balance between its competing sets of customers: the 1.2 million paying Gold users and the thousands of restaurants it needs to make the program valuable. “Gold has been a super-duper success, and that has been the trouble,” Goyal said. “Maybe there is 1% that abuses Gold, but that’s not the norm.”

One typical Gold user is Anushka Jankar, who dined at Vahnilla on a recent Tuesday afternoon with two friends. She said that it was her first time there and that she had discovered the place through the app.

Jankar said Gold did not dominate her dining choices, though. “I eat out a lot, and I’m a big foodie,” she said. “Basically I use it when it’s the end of the month and my bank balance is low.”

The program also works better for some restaurants than others.

Rudresh Agarwal, co-owner of Carpe Diem, a bar and shisha lounge in Kolkata, in eastern India, said he lost a little money on Gold diners but viewed the program as a way to get exposure. He said he could afford the losses because he profited from the liquor and shisha, or water pipes, that his restaurant served.

For a place that offers only food, however, the Gold discounts could be devastating. “If you do not have other products, the cost will not work,” he said.

Porwal said she was sticking with the Gold program for now. She said she was grateful that fellow restaurateurs had pushed Zomato to improve the program and wants to see how the changes, which go into effect in a few weeks, play out.

Goyal said Zomato would keep listening to the restaurants, even if they did not always see eye to eye.

“We know that whenever the industry grows, Zomato grows along with it,” he said.

Tweets by @forbes_india
WeWork is going public. Are its numbers too private?
Ten interesting things we read this week