Chinese smartphone brand Realme, launched to take on leader Xiaomi, is off to a blistering start—but its real challenge starts now 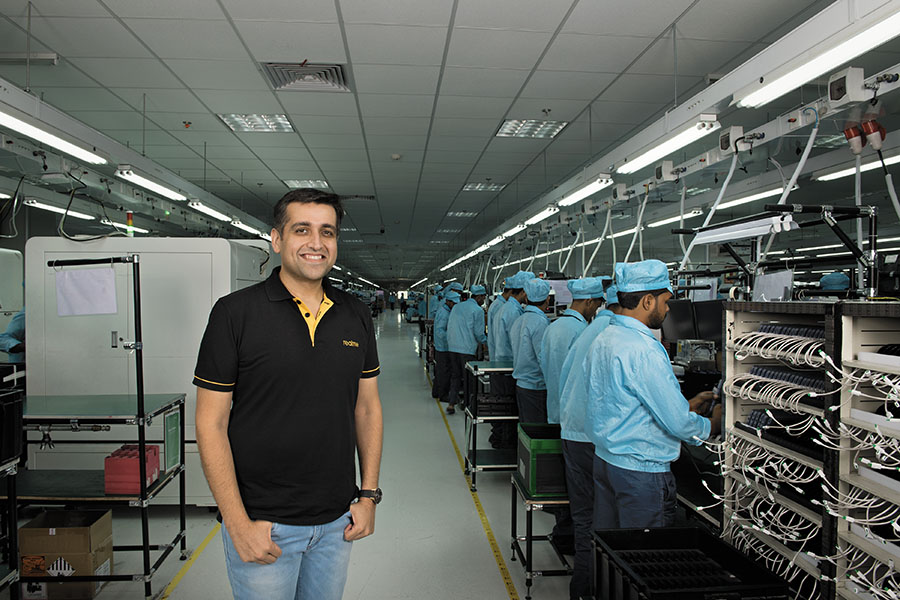 In 2001, Van Diesel-starrer The Fast and The Furious broke all box-office records, both in the US and overseas markets. Made at an estimated cost of $38 million, the movie went on to gross over $207.3 million worldwide. Its success spawned a series of record smashing sequels. Madhav Sheth doesn’t remember any of these numbers; what the CEO of Realme does like to do is recall the film in the context of the records his fledgling smartphone brand has broken since last May. Realme 1, the first model rolled out by the China-headquartered BBK Electronics, sold out 1.2 lakh units in just 10 minutes in its first ever sale. By September, Realme 2 had clocked 3.7 lakh units in another 10 minutes. Within a span of few months, the sub-brand of Oppo became the fastest to achieve 1 million sales in the country—all through online sales.

More records were set to tumble. In one year, Realme become the fastest brand to achieve 8 million users, according to Counterpoint Research. In the first quarter of this year, it grabbed third slot in the online smartphone pecking order with 11 percent market share. During the same quarter, it became the fourth biggest overall smartphone brand. “We are fast. We are furious. We are disruptive,” says Sheth, 37, who worked as sales director at Oppo for a year before picking up the reins at Realme India. At DLF Cyber City—Realme’s office in Gurugram—there is no trace of the umbilical cord between the parent brand and Realme. Except a small board at the entrance that mentions the registered and corporate office: Oppo Mobile India Private Limited. “We are separate brands, with just one thing in common: A manufacturing unit,” says Sheth. 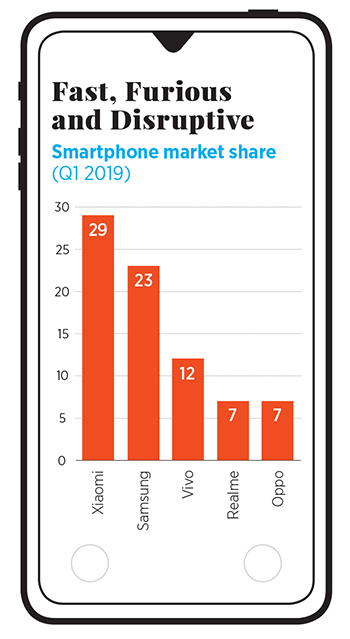 Realme, which now works on an online-offline hybrid model, is present across 50 cities and 5,000 outlets. The target for this year is to reach out to 20,000 outlets in 150 cities. “We will become the biggest smartphone brand in two years,” he claims. Every employee of the company, he adds, swears by the philosophy of the brand: Dare to leap.  Furiously Fast
Realme’s birth is perhaps as stunning as its pace of growth. It took just two months to launch the brand. One fine February afternoon, Sheth made a call to Sky Li, the then vice-president of Oppo and head of Oppo’s overseas business, in China, and discussed the need to launch an online-only brand not just in India but worldwide. The trigger was simple: There was an online gap. While price had become the only way to measure a brand, price-to-performance ratio was flaunted by others as the only tangible way to rate a phone. “Nobody was talking about user experience,” he says.   A big challenge, which interestingly turned out to be the biggest opportunity to launch a new brand, was the huge difference between the biggest online player (read Xiaomi) and the second brand (Samsung). “The gap was huge, over 50 percent in India. This gave us an opportunity,” adds the CEO. The thought of launching a product within Oppo was ruled out from the beginning. Oppo had its own strategy, a dedicated set of customers, was more dominant offline, and it made little sense to disrupt the brand. The issue was not only about the strategy to launch the new brand but the need for a separate brand. During launch, the critics came hard at the Li-Seth team. “Is there a chance for a new player in such a fierce competitive market was the normal question,” Li, the founder and global CEO of Realme, recalls in an exclusive interaction with Forbes India. “Well, I think we have proved there’s always a chance for a new player like Realme.” So what exactly is the secret sauce behind the spectacular success? “It is just two simple things,” Li further says. One, Realme listened to the consumers closely. And, two, the brand made the best product in every price segment. “Sounds easy to do. But, in fact, is difficult to achieve.” After working in over 32 countries, Li was convinced that India had emerged as the youngest and among the most dynamic markets in the world. For a brand that is targeting millennials and Gen-Z, India is and will always be the most important market. The performance of Realme in Indonesia, Southeast Asian countries and China, Li adds, too has been commendable. The success of Realme, explain analysts, is based on a set of concurrent factors. The biggest is the focus on the mass segment. Given that over 85 percent of India’s smartphone market lies below $300 (roughly ₹20,000), Realme wanted to have a focussed strategy and plan for this segment. The need for a separate brand, the experts underline, didn’t carry any risk of brand dilution of Oppo. “Realme came as an alternative to Xiaomi with similar price points, device design and specs, expanded to offline quickly and tasted success,” says Navkendar Singh, research director (devices and ecosystem), at IDC India & South Asia. Oppo realised that to sustain its presence among top phone brands, a multi-channel approach is important. After all, offline accounts for 20 percent of total sales. “Oppo also needed to take the leader, Xiaomi, head-on with a clear strategy to match its portfolio at every price point aggressively,” says Singh. Agrees Faisal Kawoosa, founder and chief analyst at techARC. To enter into a space that was believed to be impenetrable due to the stronghold of Xiaomi was a bold move by Realme. Consumers, he lets on, wanted choice in the segment, too. Realme’s focus was to replicate what Xiaomi was doing in terms of product, pricing, promotion as well as place. “It successfully replicated the 4Ps (product, price, place and promotion) in Xiaomi’s territory and established itself,” says Kawoosa. Though the success has been quick, the going might not be easy. Reason: An aggressive Xiaomi and a resurgent Samsung. Realme, contends Singh of IDC, will face a challenge in expanding further in offline channels. With limited shelf space and growing aggression by Xiaomi, in addition to sustained investments in offline by Samsung, Vivo and Oppo, sustaining brand salience won’t be easy. Sheth, for his part, is aware of the challenges, but loves the role of a challenger. “It is fun to be an underdog. You can play the way you want to, and surprise everyone,” he says. Realme, for sure, has surprised its rivals. But the real test of the brand would not only be fending off the fight from Xiaomi but also maintaining a sustainable pace of growth. “I just want to stay focussed,” says Sheth.

Tweets by @forbesindia
I don't like the word 'influencer': Bhuvan Bam
Google Glass lives on as a device to teach autistic children