The debt trap for Indian businesses

Before the 2008 downturn, several Indian companies leveraged their balance sheets to aggressively pursue growth. For some, the move turned out to be a double-edged sword 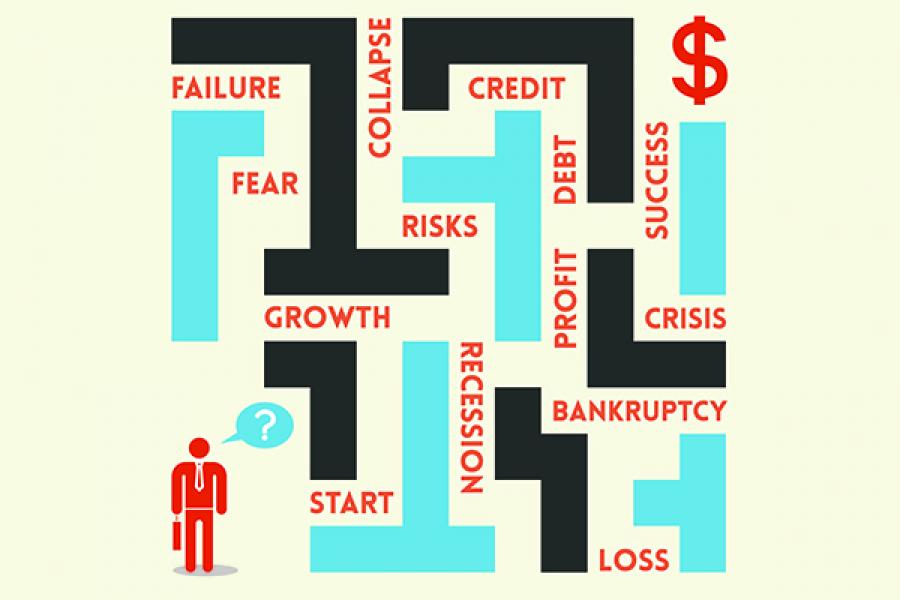 The noun ‘leverage’ refers to the action of a lever, a bar that rests on a pivot at one point and is used to move an object at a second point by a force applied at a third. With capital structure, debt is the bar used to move returns on equity (RoE) upwards. As long as the rate of return on capital is higher than the post-tax cost of debt, RoE will be superior compared to an unleveraged business.

The trouble begins in a sustained downturn: When toplines stagnate, margins decline, cash flows dry up, and yet, debt has to be serviced, RoE slides precipitously. This makes financial leverage a double-edged sword. 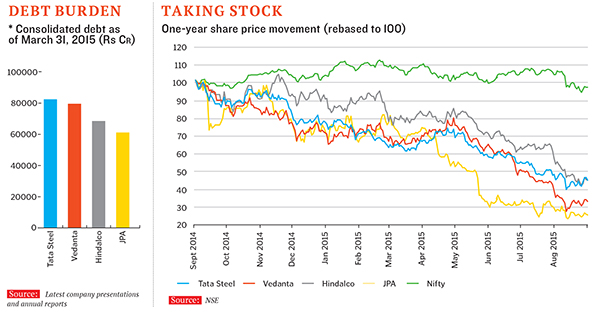 After the 2008 financial crisis, some Indian businesses that had heavily leveraged their balance sheets to pursue acquisitions and brownfield/greenfield projects suffered a decline. As creditworthiness slipped, the cost of funding, too, went up in some cases.

We take a look at some of the most indebted listed companies, profiled on the size of their debt, above Rs 50,000 crore as of March 31, 2015, and a steady decline in debt serviceability. Banks have been left out from the list as debt, for them, is raised in the normal course of business and assumes a different context than corporate debt; so have been PSUs since aspects such as subsidy burdens, government guarantees and social obligations come into play.

Tata Steel
Most of Tata Steel’s debt pertains to the $12.9 billion leveraged buyout of Anglo-Dutch steelmaker Corus in 2007; $6.1 billion of debt was raised in Corus’s books while a large portion of Tata Steel’s equity contribution was paid for by using foreign currency debt raised in its Indian books. Corus has required ongoing funding support since acquisition.

The foreign currency debt has continued to swell due to inadequate returns on the Corus investment as well as adverse exchange rates. In FY15 alone, increase in the value of borrowings due to rupee depreciation amounted to Rs 933 crore (Rs 828 crore in FY14).

The disposal of non-core assets is offset by the funding requirements of their Odisha plant, which is likely to be commissioned in FY16.

At present, Tata Steel uses up about 40 percent of Ebitda in debt service. Seen in the light of the large write-downs in its investment book (Rs 6,500 crore in FY15) and the growing depreciation charges once the Odisha plant is commissioned, the bottomline may continue to be weighed down.

Vedanta’s acquisition debt has burgeoned over the years and now a combination of regulatory hurdles and a price/demand slump in all these sectors has hurt its operating prospects. (Aluminium prices at the London Metal Exchange have plummeted to a six-year low of $1,475 a tonne.)

Besides, the company has been forced to initiate the process of shutting down its Rs 4,500 crore, 1 mtpa alumina refinery at Lanjigarh due to the non-availability of bauxite from Odisha and the current turmoil in global aluminium prices. Additionally, a non-cash charge of Rs 19,956 crore was taken in FY15, mostly on account of Cairn India’s impaired acquisition goodwill and assets in Sri Lanka. Adverse currency movement has worsened the problem: At present, about 57 percent of debt is dollar denominated.

With the oil and metal price outlook remaining weak, Vedanta is looking at corporate restructuring to increase available cash and reduce debt. The two sources are:

a) Merger of Cairn with Vedanta, which has hit a hurdle with lenders and minority shareholders; and

b) gaining 100 percent control of HZL (Vedanta’s shareholding is 65 percent and HZL has cash of more than Rs 25,000 crore). The government has vetoed this in the past.

The aluminium market has virtually collapsed in 2015 due to weak growth and continued supply side indiscipline by China. The country produces about 50 percent of the world’s aluminium and has been manufacturing much more than the demand, which is crippled by slowing economic growth. To offset its losses, China has not only scrapped export taxes on the metal, but continued to add capacity, leading to sustained overproduction.

Besides, while falling energy cost is usually a positive for this power-hungry sector, it has only led to a further decline in end-product prices: As input costs go down, buyers are forcing producers to bring down the prices.

Though volumes at Hindalco are being maintained, and even growing in some segments, lower realisations and high outgo on account of interest and other fixed costs have meant declining profitability. The combined effect of weak operating metrics and the debt burden has kept RoE subdued (21 percent in FY07 to 2.2 percent in FY15).

Jaiprakash Associates (JPA)
Regulatory uncertainties over JPA’s power assets and, more significantly, the ambitious Jaypee Greens project have led to a slump in business prospects. The group has nearly 500 million sq ft of mostly incomplete real estate development, with about two-thirds of it in the stagnant Greater Noida market.

JPA has been looking to monetise substantial assets to de-leverage the balance sheet. It has significantly pared its cement capacity through sales to UltraTech Cement in 2014. Hydroelectric projects in Himachal Pradesh have been sold to JSW Energy recently and an MoU to sell the 500 MW thermal plant in Madhya Pradesh is in place. In fact, these monetisations are the only triggers for the stock for quite some time.

An analysis of JPA’s balance sheet is difficult as not too much data about its financials is available publicly. On the basis of available data, it can be seen that JPA’s Ebitda just about covered interest costs till last year. In FY15, interest outgo exceeded Ebitda and total debt rose to 10x earnings. Moreover, the average net financing cost is nearly 12 percent, the highest among highly-leveraged peers. The company has planned sales of more assets and this may be its only route to reduce debt.

A long wait
It’s common for debt-ridden companies to refinance and renegotiate loan terms to tide over what was thought to be temporary stress. But for many companies, especially for industrial commodities (bulk goods that are traded in an industrial market), a turnaround isn’t exactly around the corner.

If operating perfor-mance falls further and if equity recapitalisation isn’t feasible, some of these businesses could end up borrowing further just to service debt. A threshold of 2x Ebitda/interest is widely regarded as a minimum for sustaining leverage. In these specific cases, while the average for all companies together is around this level, the threshold may not be entirely appropriate considering the potential for large, non-cash write-downs (post-Ebitda) and weak profitability. Two factors are now compounding the problem: a) The reduced refinancing appetite of banks due to low capitalisation, high levels of non-performing assets and stricter RBI norms; and b) the weakening rupee, which has bloated the reported debt figures for foreign currency loans.

As and when business prospects improve, these companies will have to wait that much longer to claw back the leverage-induced deficit. In effect, the debt and the large proportion of operating income devoted to debt service make leverage reduction a Sisyphean task. In Greek legend, Sisyphus was punished by the gods and had to roll an immense boulder up a hill, only to watch it roll­­ back down, repeating this action forever. In this case, not only is the boulder (debt) getting bigger, even gravity (declining profitability) is intense. Besides, Sisyphus isn’t getting any more agile either.