In the past few weeks, HUL dropped 'fair' from Fair & Lovely, and Shaadi.com shut down its 'skin tone' filter. But through Bollywood, matrimonial ads and other forms of media, colorism pre-dates colonialism in South Asia, reinforcing systemic differences in caste and class

By Priya Arora and Sapna Maheshwari 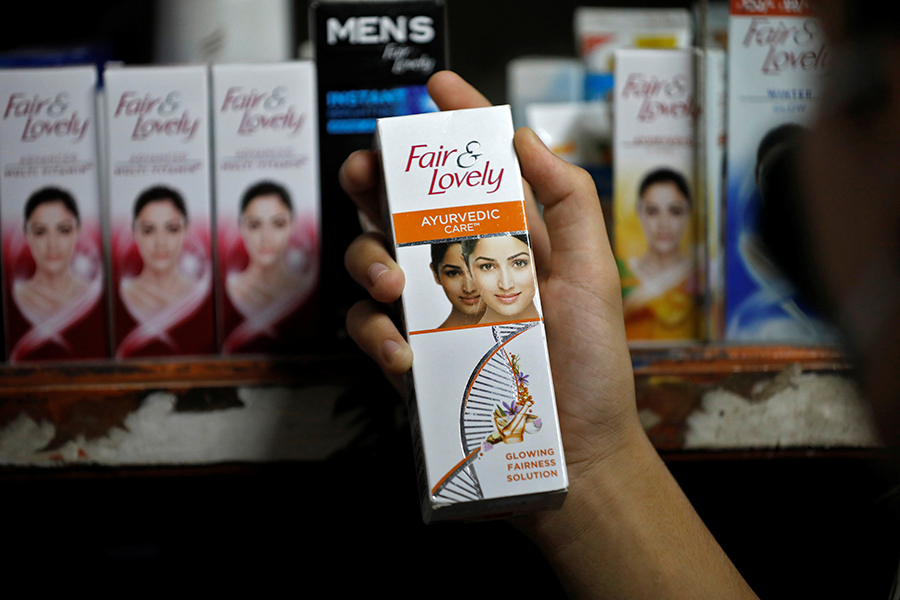 A customer picks up "Fair & Lovely" brand of skin lightening product from a shelf in a shop in Ahmedabad, India, June 25, 2020.
Image: REUTERS/Amit Dave

As major consumer products companies have rushed to declare their opposition to racism in response to the national outrage over the killing of George Floyd, many of them have been accused of openly promoting a beauty standard rooted in racism and discrimination.

Unilever, Procter & Gamble, L’Oreal and Johnson & Johnson — some of the world’s biggest advertisers — sell beauty products that advocate lighter, whiter skin in Africa, Asia and the Middle East. Those products are not marketed in the United States, but the sales of the skin lighteners have drawn criticism, especially from South Asians, for perpetuating colorism — the term describing the preference for lighter skin — in other countries, under popular brand names like Pond’s, Olay, Garnier and Neutrogena, and their own labels like Fair & Lovely.

The backlash appears to be forcing action. Unilever said Thursday that it would remove the words “fair/fairness, white/whitening, and light/lightening” from product packaging and communications and change the name of its Fair & Lovely brand, a juggernaut in India that has marketed lighter skin as a path to success for decades. Unilever has also sold skin lightening products through Pond’s and Vaseline.

“We recognize that the use of the words ‘fair’, ‘white’ and ‘light’ suggest a singular ideal of beauty that we don’t think is right, and we want to address this,” said Sunny Jain, Unilever’s president of beauty and personal care.

The move followed Johnson & Johnson’s announcement last week, following questions from BuzzFeed News, that it would no longer sell its Neutrogena Fine Fairness and Clean & Clear Fairness lines, which were advertised as dark-spot reducers but also used to lighten skin.

Procter & Gamble, which sells similar products under its Olay brand, declined to comment. L’Oreal, whose Garnier site in India includes a “whitening” section for men’s face wash under the PowerWhite brand, did not return requests for comment.

The focus on skin lightening products has emerged as U.S. brands reckon with their use of racial stereotypes involving Black Americans on popular products. The owners of Cream of Wheat, Uncle Ben’s rice and Mrs. Butterworth’s syrup said this month that they would review how the brands’ products are packaged. That came after Quaker Oats said it would retire its Aunt Jemima brand after acknowledging that its logo, a grinning black woman, was based on a racial stereotype.

In South Asia, anti-blackness and colorism have origins that predate colonialism and systemically reinforce differences in caste and class.

Padma Lakshmi, the longtime host and executive producer of “Top Chef,” recently spoke out against such products, and in a phone interview said that colorism permeated her childhood in India. Once she got to the United States, she said, “I never felt that I was on any comparable level to my white peers because of my skin color, because I got that message in so many different ways, subtle and overt.”

It came, she said, through ads, magazine covers and even family advice to stay out of the sun, reinforcing that she was too dark to be desirable. “These things also come at you at a very vulnerable time in your life when you’re worried about your appearance,” she said. “It’s really a shame to have this added baggage of wanting to be something you’re not.” Lakshmi added that it took leaving the United States for Europe for a time during her modeling career for her to learn her complexion could be seen as attractive.

The preference for fairness in South Asia is also perpetuated through Bollywood movies and celebrities. The industry has also long favored lighter-skinned actors and has employed brownface in several films.

Priyanka Chopra Jonas is among several Bollywood celebrities who have faced an online backlash recently over their previous endorsements of fairness creams. Her recent social media posts calling attention to Floyd’s killing and the Black Lives Matter movement have prompted people to circulate images of her advertising fairness creams from Garnier.

Though Chopra Jonas has mentioned in previous interviews that she regretted advertising such products, she has not responded to the wave of criticism this month, and other Bollywood stars who have also promoted similar products have remained largely silent.

Skin-lightening products are estimated to be a multibillion-dollar market, though its precise size is difficult to estimate, particularly as brands alter the language on their products to less overtly promote changes in skin tone. Fair & Lovely, for example, will continue to be sold, though Unilever noted it had removed “before-and-after impressions and shade guides that could indicate a transformation.”

Nina Davuluri, the first Indian American to win the Miss America pageant in 2014, has been working to fight colorism for years — particularly after she woke up the day after her victory and said she read an Indian newspaper headline that said: “Is Miss America too dark to be Miss India?” She has been working on a documentary since 2018 that set out to explore why so many cultures believe lighter skin is better and how it affects people’s lives.

“Colorism is a form of racism — not all of it, but part of it,” Davuluri said. “Ultimately, companies are creating these products that do prey on these archaic notions of colorism, and they’re also paying celebrities millions of dollars to advertise for these whitening products.”

She created a petition this month calling on Procter & Gamble, Unilever, L’Oreal and Johnson & Johnson to stop making skin whitening products and what she deemed racist ads, and instead create inclusive products.

“You have to have accountability to recognize that you can’t just say this in one part of the world — it really has to be a holistic standpoint from your entire company,” she said, referring to the companies’ public statements about equality.

In India, colorism has also long been reinforced by a much older tradition: matrimonial ads. Alongside categories like education and caste, skin-tone options like “fair,” “dusky,” and “wheatish” would often appear in newspaper advertisements as parents sought matches for their children.

Shaadi.com, one of the world’s largest matrimonial sites, recently came under fire after a user, Meghan Nagpal, discovered the “skin tone” filter on the site. The company initially said it was simply providing a service many parents wanted, prompting outrage in a Facebook group for South Asian women. One of the women, Hetal Lakhani, started a petition, which led to the site taking down the filter.

The filter was “non-functional and barely used,” the company said in statement. “We do not discriminate based on skin color, and our member base is as diverse and pluralistic as the world today is.”

The recent changes give Lakshmi hope that things are moving in the right direction.

“Things are getting better,” she said. “Ending these creams, stopping the advertisements, and just not referring to people based on these kinds of things is going to go a long way. Hopefully, my daughter’s generation will grow up free from the shackles of color prejudice, at least to some degree.”